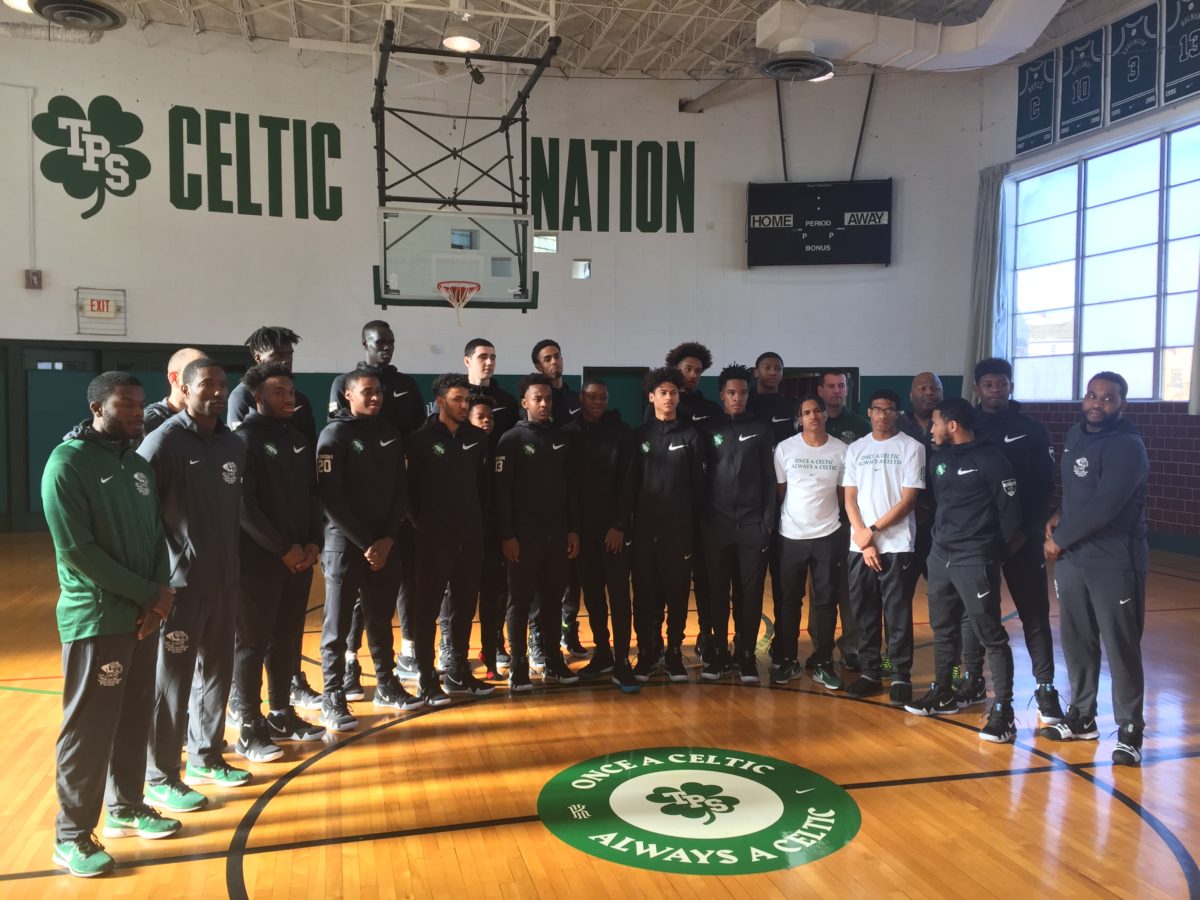 By ADAM ZAGORIA HILLSIDE, N.J. — Current Boston Celtic and former Patrick School (NJ) point guard Kyrie Irving paid for a complete renovation of the gym, locker room, weight room and lounge at his alma mater. The current team was given their first look at the new facilities on Saturday morning. For the past two weeks, Nike paid for the Celtics to practice in a nearby gym while the renovations were conducted by Irving’s Nike team. “It means a ton,” head coach Chris Chavannes said. “We’ve come a long way since being closed in 2012 to having this happen. It’s absolutely amazing.” Irving, the former No. 1 pick out of Duke, has surprised his old school each year at the holidays with a new gift. “Last year he sent everyone a backpack with the Beat Headphones and many things,” Chavannes said. “He outfitted the girls team this year as well as the boys. Every year it’s been a surprise. We’re never told what’s going to happen, just that something’s going to happen…We’ve been very blessed by him.”

.@KyrieIrving paid for a complete renovation of the gym, locker room and weight room at his Alma Mater @patrickschool and the team just saw the lockers pic.twitter.com/t5AN56Fw5K

.@KyrieIrving renovated the weight room at the @patrickschool and the team is Seeing it now pic.twitter.com/OiOv3NUaj3

The gym renovation included the installation of banners honoring former coach Kevin Boyle and the many players who starred at St. Patrick’s and then The Patrick School. That group includes current and former NBA players Irving, Michael Kidd-Gilchrist, DeAndre’ Bembry, Sam Dalembert and Al Harrington, as well as former players like Shaheen Holloway, Corey Fisher, Mike Nardi, Nick Richards (Kentucky), Jamir Harris (Minnesota) and Marcus McClary (Monmouth). “A lot of great players have played here,” Chavannes said. “They’re not even aware of the fact that they’re names are raised up there. The person who started this all was Kevin Boyle and he’s not even aware of the fact that his banner’s up there. So I’ll always be forever grateful not only to Kyrie and all the alumni who played here, but to Kevin Boyle who started the program. We will never, ever forget that. If it wasn’t for him, we wouldn’t be here now.”

They are the first and only ‘Kyrie School’ pic.twitter.com/mGfxnoqKRP — Adam Zagoria (@AdamZagoria) January 6, 2018

There were also new pairs of Kyrie 4s and Celtic t-shirts waiting in the locker room.

At Patrick School where Kyrie Irving has rebuilt his alma mater’s gym and locker room. Here’s what’s waiting for the players in the lockers: Kyrie 4s and special Celtic t-shirts #NJhoops pic.twitter.com/gSovutwhp1

The players were overwhelmed with the gifts and renovations.

“I want to say thank you to Kyrie for all this stuff. It’s very beautiful.” senior Valdir Manuel said.

Said senior guard Justin Williams: “It’s unbelievable to know that coach came from not even having a building to having something done like his by Nike is absolutely amazing. It shows that [Irving] is someone that really truly cares. There are guys who go to a collegiate program or whatever and you never hear from them again. And then for him to come back, play with us and do this, unbelievable.” The Patrick School, led Richards, the Kentucky freshman center, won last year’s New Jersey’s Tournament of Champions title. Irving also paid for the tuition of a Patrick School student, Spencer Joyner, an eighth-grader who was diagnosed in last November with pseudotumor cerebri, a debilitating condition that results in migraine headaches and can cause vision loss.
Follow Sean on Twitter
Follow Adam Zagoria on Twitter
And Like ZAGS on Facebook