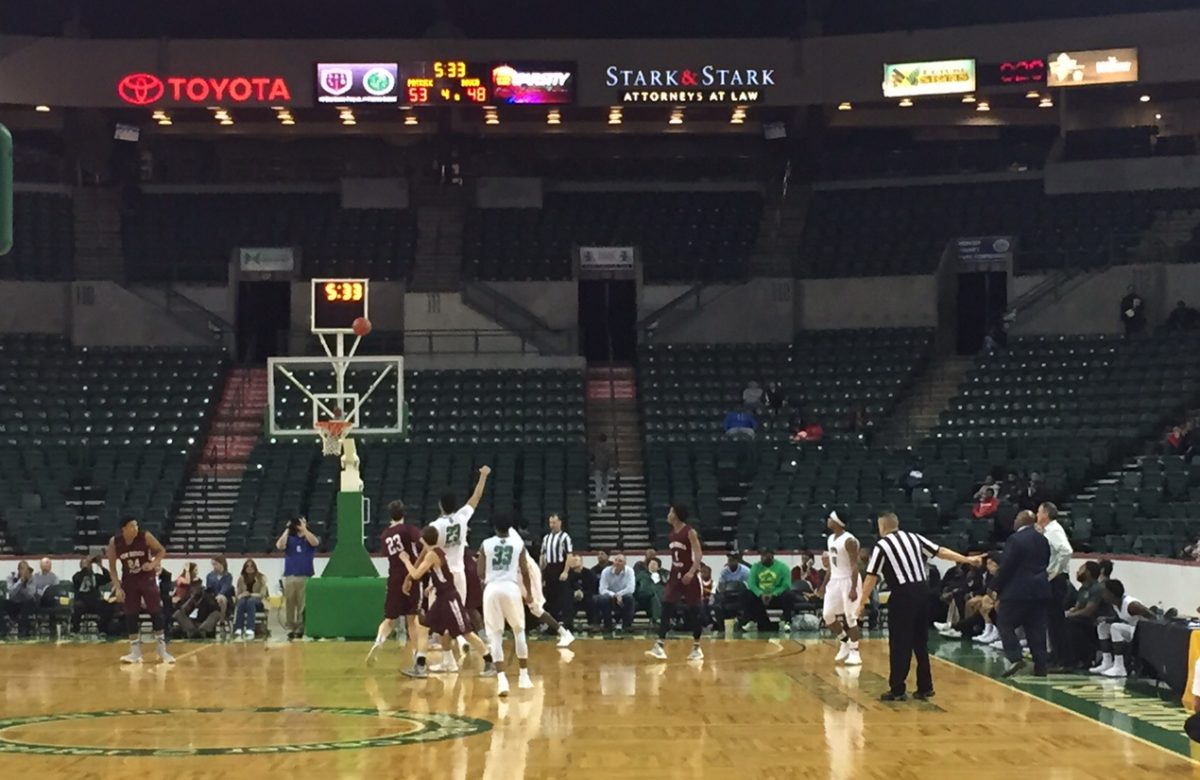 By ADAM ZAGORIA TRENTON, N.J. — For Kentucky-bound big man Nick Richards and his Patrick School teammates, there has been one mission and one mission only this season. On a team loaded with seven seniors, five of whom have already signed to high-major Division 1 schools, that mission was to win the prestigious New Jersey Tournament of Champions title. On the first day of spring, their mission is finally complete. The Patrick School knocked off Don Bosco Prep, 69-55, in the TOC final at Sun National Bank Center. The six-team TOC features the group winners from New Jersey’s four public school and two non-public groupings. “It’s amazing, it feels unreal,” said the 6-foot-11 Richards, who managed just seven points and seven rebounds while battling foul trouble after going for 26 points when The Patrick School knocked off Teaneck, 64-45, in the semifinals. “I can’t even describe the feeling. “Right now I’m just trying to focus on this moment right here. I won’t get this moment back, so whatever me and my teammates are going to tonight, we’re just going to celebrate.” Uncommitted senior point guard Jordan Walker tallied a team-high 17 points and five assists en route to MVP honors, and junior big man Valdir Manuel scored 12. Minnesota-bound guard Jamir Harris also tallied 12, hitting 2-of-6 from beyond the arc. Sophomore guard Al-Amir Dawes added nine points, all on three-pointers.

Champs. Good for them. pic.twitter.com/QDk7EJYMjz

Walker said he dedicated this season to his 29-year-old older brother, Jamal, whom he said was murdered in Detroit on Nov. 3. “I dedicated this season to my brother,” he said. “It was hard this year with the ups and downs, on and off the court but I’m happy we got the ‘W,’ that’s all that matters to me.” “Not many people can say they won the Tournament of Champions and for this to be my last year here and we get a Tournament of Champions after all the stuff I went through in the beginning of the year, the death of my brother and all that.” Chris Paul led Bosco (30-2) with 19 points while Marcellus Earlington and Ronald Harper added 13 apiece. The Celtics (29-4), the Non-Public B state champion, last won the TOC title in 2009 as St. Patrick’s. This is the program’s sixth TOC title, but first since they transitioned to The Patrick School in 2012 and first since Chris Chavannes and Mike Rice began co-coaching the program last season. Kevin Boyle was the school’s coach for its first five TOC titles.

“I’m very, very happy for Jamir and Marcus [McClary] and their parents and their families who stuck with us,” Chavannes said. “When those guys started off in our school, we built the interior of the building and we didn’t even have doorknobs and they were there. And they watched us grow from not having doorknobs to having a building that is a school and has life like other schools. So I’m very, very happy for that, but particularly for those guys for staying with us.” The Patrick School was making their seventh finals appearance in eight TOC trips. The Celtics are now 13-2 overall in the TOC. Bob Hurley and St. Anthony’s have won 13 TOC titles, meaning St. Anthony’s and St. Patrick’s have combined to win 19 of the 29 TOC crowns. Richards also helped continue a recent tradition of future John Calipari players winning the New Jersey state championship. The Jamaican-born Richards became the third Kentucky signee in four years to win the TOC, following Karl-Anthony Towns in 2014 and Isaiah Briscoe in 2015. Towns was the NBA Rookie of the Year last season in Minnesota, while Briscoe will lead the Wildcats into an NCAA Tournament Sweet 16 matchup against UCLA on Friday night in Memphis. Next up for Richards will be a series of All-Star games, including the McDonald’s All-American Game (March 29), the Nike Hoop Summit (April 7) and the Jordan Brand Classic (April 14).