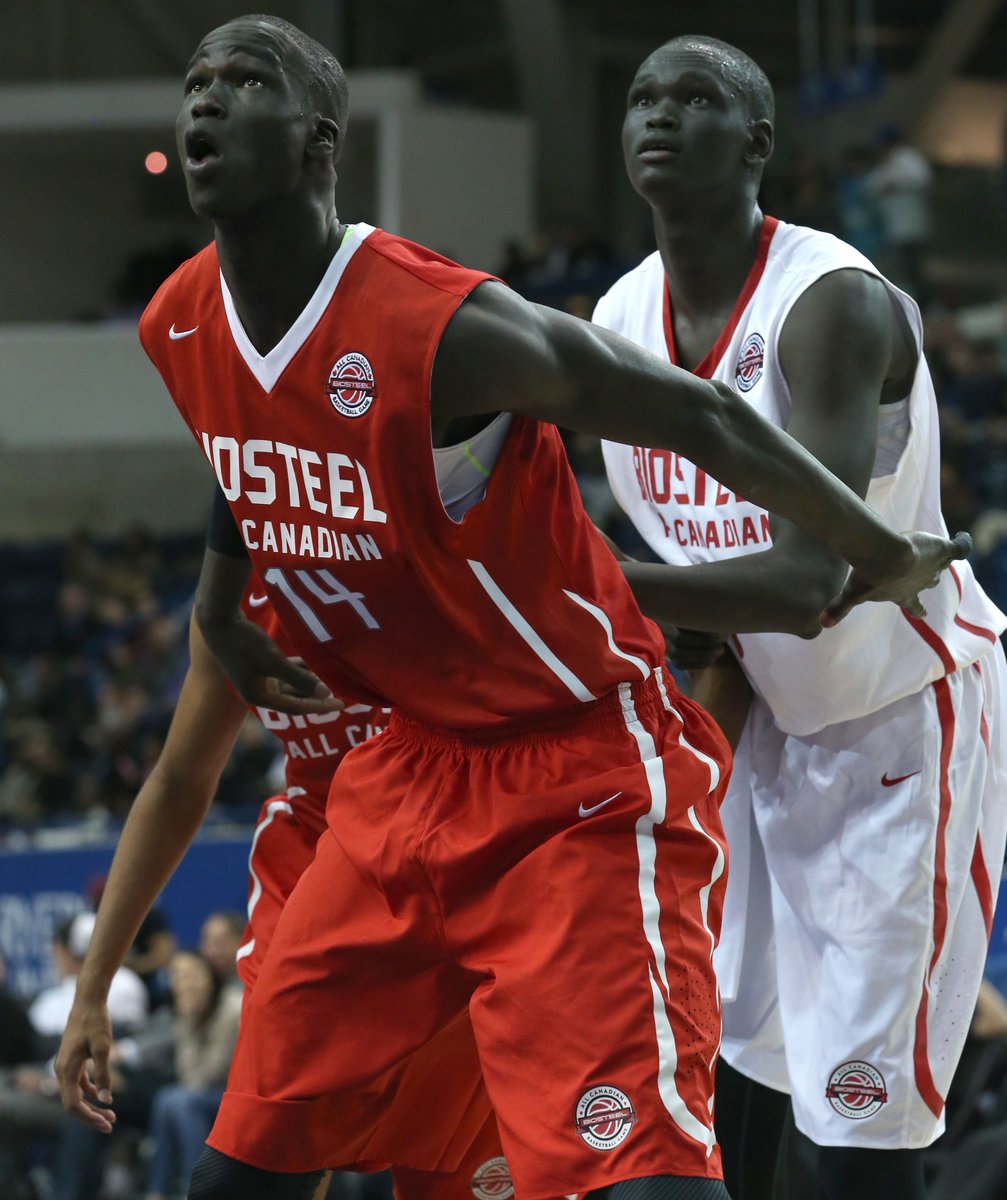 By ADAM ZAGORIA Matur Maker was sitting with his older brother Thon Maker in section 125, row 4 at the Barclays Center for the NBA Draft on June 23, 2016. When Commissioner Adam Silver shocked the basketball world by announcing that the Milwaukee Bucks had selected Thon Maker from the Republic of Sudan and Perth, Australia with the No. 10 pick, Thon stood, smiled, acknowledged his agent, Mike George, his mentor, Ed Smith, and his brother Matur before making his way down the stairs and toward the stage. He had not been invited to the Green Room and thus his selection out of the stands was fairly dramatic. Matur, meantime, was already imagining how he might top Thon, enabling the younger brother to follow the older brother — both originally from the war-torn nation of South Sudan — into the NBA. “When he got picked No. 10 I was excited,” Matur said this week by phone from Canada, where he plays for Mississauga Prep. “I was thinking I can do better. I was really excited. I know a lot of teams missed out [on Thon]. It got me way hyped that I can do way better than he can. “In high school I always tried to beat him in whatever we do. I’ve always tried to do better. I was trying to beat him. He was No. 10 so I’m trying to be better.” Matur, who is 6-foot-10 with a 7-foot-3 wing span, even fantasized that Silver might call his own name that night. “Oh, definitely,” he said. “I really did. After the Draft I told coach [Smith], I said, ‘Coach, I really thought the Commissioner was going to call my name.” Matur, who just turned 20 on New Year’s Day, plans to enter this year’s NBA Draft and hopes to follow his brother’s path from the preps to the pros. He fits the criteria of being at least 19 years old and one year removed from his graduating class. “I think for [Thon] entering the draft out of high school, a lot of players were inspired that you can go straight right now when you have it,” Matur said. “The opportunity is right there, so go take it.” Like his older brother, Matur was born in South Sudan and then moved from the war-torn country with his family to Australia before ultimately coming to the United States and settling at first in Virginia. Last August, he averaged 26.0 points, 7.0 rebounds and 1.5 blocks at the Adidas Nations event, where he led Asia Pacific to the finals against USA Red. The Americans won the game, 108-79 behind Zion Williamson’s 28 points and Immanuel Quickley’s 15. Matur is currently averaging  25.5 points, 11.3 rebounds, 2.8 assists, 2.1 blocks and 1.7 steals for Mississauga Prep, but remains mostly a mystery to NBA scouts and experts. He is not currently listed on most major mock drafts, including ESPN.com or NBADraft.net. “I haven’t seen him in two years,” one national draft expert who requested anonymity said. “He’s a good kid with a high motor. Not as good as his older brother. He’s a more physical type player.” “I’m definitely looking to prove some people wrong,” Matur said of the mock drafts. Sky Smith, who runs the Mississauga Prep team along with Ed Smith (not related), said scouts from the Timberwolves, Cavaliers, Mavericks, Spurs, Pistons, Celtics, Grizzlies and Heat “have either seen him or are planning on seeing him at one of our next tournament stops.” Some 40 NBA scouts saw Maker go for 45 points, 20 rebounds, 3 steals, 2 assists and 2 blocks at an event in Toronto on Jan. 11 that was held around the G League Showcase. On Friday, more than 50 scouts watched Maker post 25 points, 10 rebounds, 5 blocks and 3 assists. “This definitely wasn’t a waste of time,” one scout told SI.com. Matur and his Mississauga Prep teammates will play in an event in New York called the Gotham Hoops Classic on Jan. 19 where they hope to attract some NBA scouts. “I’m not really paying attention right now,” Matur said. “I just try to play my best at all times, no matter who’s watching.” He said schools like Indiana, Kansas and Oregon were initially recruiting him, but that they have stopped because they know he’s planning to declare for the draft. Asked if he feels he will miss out on the college experience as his brother did, Matur isn’t concerned. “No, I don’t feel like I’m going to miss out,” he said. “Thon was telling me, ‘You got the opportunity right now, why don’t you go take it?’ That’s the most exciting part right now.” After starting 34 games for the Bucks during his rookie season and averaging 4.0 points and 2.0 rebounds, Thon Maker is averaging 4.6 points and 3.7 rebounds this season while starting eight games. On New Year’s Day, he tied his career-high with 16 points against Toronto and then followed that up with 12 points against Indiana two days later.

While Thon was a natural power forward now playing center, Matur is more of a point forward who says he can play the 1, 2 and 3 and guard all three positions as well. “I play 1-3, defend 1-3 and maybe a little of the 4 depending on how big they are,” he said. “I can play on both ends right now.” For his part, Ed Smith thinks Matur will impress NBA personnel once he officially declares for the draft and begins workouts this spring. “I’ve been around Giannis, just watching him the last couple years,” Smith said. “I went back and looked at his body and his tape and you see where the progression happened. He was a thin, lanky kid and came in to play multiple positions and, similar to Matur, is super-long. And he’s transitioned really well.” He added that Matur would likely have the same agent as Thon, who is repped by Excel Sports. “I’m very comfortable with the people who were around Thon,” Smith said. “I think they did an excellent job with Thon, but we can’t do it yet.” The NBA Draft is set for June 21 at Barclays Center. Maybe this time around, Thon Maker will be congratulating his younger brother instead of the other way around. Photo: RICK MADONIK/GETTY IMAGES *** Follow Adam Zagoria on Twitter And Like ZAGS on Facebook