Kyrie Irving is Paying the Tuition for Spencer Joyner, a Sick 12-Year-old Student at The Patrick School | Zagsblog
Follow @adamzagoria

Kyrie Irving is Paying the Tuition for Spencer Joyner, a Sick 12-Year-old Student at The Patrick School 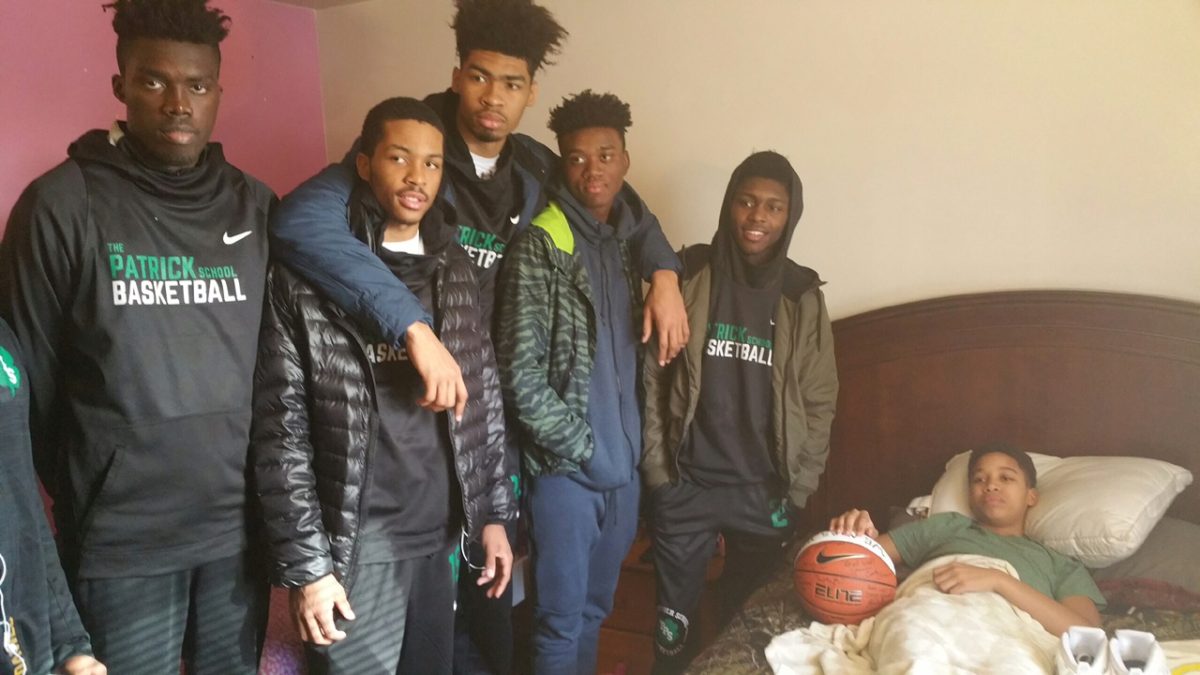 By ADAM ZAGORIA Spencer Joyner has never met Kyrie Irving, but he knows a lot about him. “I never met him,” Joyner, a 12-year-old seventh-grader at The Patrick School (N.J.), said by phone. “He plays on the Cleveland Cavaliers with LeBron and Kevin Love. He just won an NBA title last year. [He was] the No. 1 pick in the Draft, went to Duke. He didn’t play so much in college because he got hurt.” Irving is also among the leaders in votes for the upcoming NBA All-Star Game in New Orleans. Though the two have never met, Irving is making a huge difference in Joyner’s life. Spencer was diagnosed in November with pseudotumor cerebri, a debilitating condition that results in migraine headaches and can cause vision loss. The condition kept him in the hospital for more than a week and prevents him from attending school for the time being. Irving, who starred at St. Patrick’s High School before it became The Patrick School, was informed of Joyner’s condition and offered to pay his tuition, worth $5,500 for the school year. “It made me feel really good and lucky to have one of my favorite players do that,” Spencer said. It is not the first time Irving has helped out students at his alma mater. He contributes financially to keep the school afloat, donates athletic clothing and gear to the basketball team and also paid for the funeral last year of 14-year-old Nixon Geraldo, a Patrick School student who collapsed and died last October after playing basketball at a school in Elizabeth. “My connection to St. Pat’s is deep-rooted through Coach Chavannes as well as my father [Dred Irving] and as long as we can continue to support The Patrick School in any way, we are going to so I’m really happy that we have a championship winner in St. Patrick history, or The Patrick School history,” Irving said told me last June before Team USA headed to the Rio Olympics where it won a gold medal. “It’s very important, especially if you have the means to do it,” Irving said. “I’m just thankful that I have a great support system and great financial team that allows to give back to our community and support those kids, not only just the athletes but the students that we have at the school.” Chris Chavannes, the co-coach of the St. Pat’s basketball team and the school’s principal, says Irving has made a huge difference for the students. “He has also made a great impact on the student body as whole by generously contributing to the school’s general fund and helping The Patrick School’s families in financial need,” Chavannes said. “For example, one of our eighth grade students tragically collapsed and died during an activity in October, and Kyrie covered all of the funeral expenses for the family. I am very proud of the rapid success Kyrie has achieved on the court, but I am even more proud of and very grateful for how committed and loyal to The Patrick School community he has remained. He has taken his great accomplishments and the rewards that come from them and shared them with those in need.” Irving’s efforts make a real difference for kids like Spencer, who woke up one day last October and didn’t feel like himself. “One morning I woke up and my head was really hurting, and I didn’t go to school that day,” Spencer said. “And then it just kept getting worse ever since.” Mel Joyner, Spencer’s father, said his son was experiencing “dizzyness and headaches” and that after several trips to Hackensack University Medical Center he was diagnosed with pseudotumor cerebri, also known as idiopathic intracranial hypertension, a condition normally associated with middle-aged obese women, not young African-American males. “Basically he’s producing spinal fluid like everyone else, but for some reason it’s not absorbing fully into his bloodstream as fast as it should be,” Mel said. “So therefore that’s why he’s feeling pressure headaches….So you feel like you’re spinning.” During Spencer’s time in the hospital, Mel said one of the family’s medical bills for $1,200 “disappeared somehow,” and he suspects Irving may have paid for that, too. “That mysteriously disappeared,” Mel said. “We were putting two and two together and said, ‘Maybe it’s [Irving].” Spencer, 5-foot-7, says it’s difficult for him to enjoy the simplest things in life, like walking, drawing or playing basketball. “The hardest things to do [are] everything, basically just enjoying normal activities that I’m usually doing like going to school, playing basketball, going to practices after school and workouts,” he said. “I like to draw, [that’s] one of my hobbies. Play video games sometimes. Just actually walking.” He takes a drug called Diamox several times a day, “which is supposed to slow down the production of spinal fluid in the brain,” Mel said. Spencer hasn’t been to school since early November and will soon have a tutor at home. A few days after Christmas, the entire St. Pat’s basketball team, which is ranked No. 14 nationally by USA Today and features five Division 1-bound seniors, including Kentucky signee Nick Richards, visited Spencer at his home. “I was really happy,” he said. “And I thank them a lot. They gave me a basketball and a card and sneakers. It lifted my spirits a lot.” It was then that Chavannes informed Mel that Irving would pay Spencer’s tuition. “He mentioned Kyrie and he said Kyrie took care of his back tuition and his tuition for the rest of the year,” Mel said. “They said a prayer at his bedside, too.” Mel said the family hasn’t had a chance to thank Irving, “but I would love to.” He added that he sent a message to Irving via Instagram but hasn’t heard back. Eventually, Spencer hopes he to be well enough to go back to school, where he wants to continue playing point guard on the basketball court. Just like Kyrie Irving.   Follow Adam Zagoria on Twitter And like ZAGS on Facebook

Is Grayson Allen's NBA Draft Stock on the Decline?