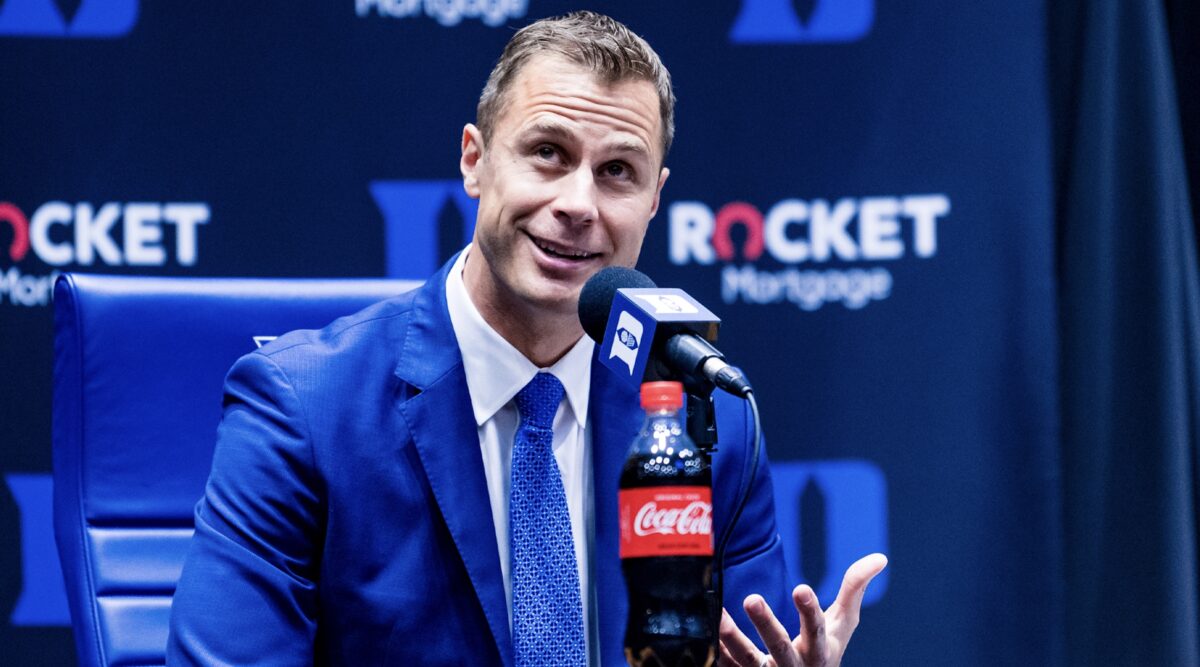 By JACOB POLACHECK The Duke Blue Devils have signed its first four members of its 2022 recruiting class in Kyle Filipowski, Dereck Lively II, Jaden Schutt and Dariq Whitehead, the program announced Monday. Duke currently has the nation’s No. 1-ranked recruiting class in 2022, per 247Sports, with Lively (No. 1), Whitehead (No. 4) and Filipowski (No. 7) all ranked as Top-10 prospects in the class of 2022. Schutt is ranked No. 55 nationally. With Jon Scheyer set to take over as head coach following the retirement of Coach K at the end of this season, this will be the first incoming recruiting class for the new impending Blue Devils head coach. Filipowski, a 6-foot-11, 220-pound center from Wilbraham & Monson (MA) Academy, was the first to commit to Duke, announcing his decision on July 29. “I’m really excited to have Kyle and his family in our family. Kyle was the first in this class to announce he was coming to Duke, and his trust and belief really meant a lot to me and our staff,” Scheyer said. “Kyle is 6-foot-11 but he has guard skills. He’s really versatile, is a big-time passer and playmaker and he’s one of the best rebounders in high school basketball. Kyle is someone that can play inside and out, can score in the post and can also shoot well beyond the three-point line. His toughness and versatility will make him a terrific player at Duke.” Whitehead, the 6-foot-6, 190-pound small forward out of Montverde (FL) Academy, became the second commit in Duke’s 2022 recruiting class when he announced his commitment on Aug. 1. “Dariq is a big-time player who’s been battle tested during his time in high school. He’s played for Montverde since his eighth grade year with a lot of other special players and has played in big-time environments,” Scheyer said. “That will really help prepare him for the transition to Duke. Dariq is someone that can guard multiple positions on the perimeter. He’s a great defender and athlete with great skill and feel for the game. Dariq really had a trust in us during the recruiting process. It’s an honor to welcome him and his family to Duke and we couldn’t be more excited to coach him.” Schutt, the 6-foot-4, 175-pound shooting guard from Yorkville Christian (IL) High School, committed to Duke on Sept. 2, becoming the third commit in the Blue Devils’ 2022 recruiting class. “Jaden is someone who has dedicated a lot of time and energy to his craft. He’s a terrific player and a premier shooter in this class,” Scheyer said. “Jaden has great feel for the game and moves incredibly well without the ball, which not only opens up things for him but his teammates. He has championship pedigree on the AAU circuit, has played at a high level and is excited to play in this spotlight and on this stage at Duke. We couldn’t be more thrilled to have Jaden and his family with us and we can’t wait for him to get on campus.” Lively, the 7-foot-1, 215-pound center from the Westtown (PA) School, became Duke’s most recent commitment when he announced his decision on Sept. 20. “We’re excited to welcome Dereck and his family to Duke University. Dereck is coming off a terrific summer where his Team Final won the Peach Jam championship and he’s played at a high level at Westtown,” Scheyer said. “Dereck fits the profile of a modern-day big man. He can run the floor, he can finish above the rim and he’s a great pick-and-roll player that can either pop or he can rim run and be a threat. The thing he does that is unique is he can really space behind the three-point line. On the defensive end, he’s elite. He’s the best shot blocker and rim protector in high school basketball and he can switch and guard one through five.” Duke also remains in the running for five-star forward Mark Mitchell out of Sunrise Christian (KS) Academy, who is down to a final three of Duke, Missouri and UCLA. Mitchell is expected to announce his commitment in December. Follow Jacob Polacheck on Twitter Follow Adam Zagoria on Twitter Follow ZAGSBLOGHoops on Instagram And Like ZAGS on Facebook