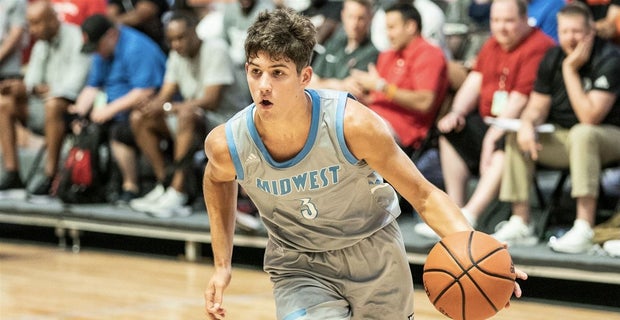 Reed Sheppard, the 6-foot-3 combo guard from North Laurel (KY), committed to Kentucky on Saturday. Reed is the son of former Kentucky basketball stars Jeff and Stacy Sheppard, and is ranked the No. 3 combo guard in 2023 by 247. He averaged 17.5 points, 3.3 assists, 5.6 rebounds and 2.4 steals last summer with the Midwest Basketball Club. “Sheppard is a combination guard that leans on more of the shooting guard side because of his three-point shooting prowess, in-between game, and knack of getting to the rim on the break where he catches most off guard with his ability finish above the rim,” per 247’s Brandon Jenkins. “Although his combo meter leans on the two guard side, Sheppard is tough, smart, and displays a lot of savvy when handling the ball primarily. Confident, moxy, fearless, and competitive are just a few words that come to mind when describing his game. He plays with a high basketball IQ and is fun to watch when he gets into a groove. Sheppard projects to be a terrific collegiate player as his skillset fits in both an up-tempo and slow-tempo paced offense and his pedigree is beyond undeniable.