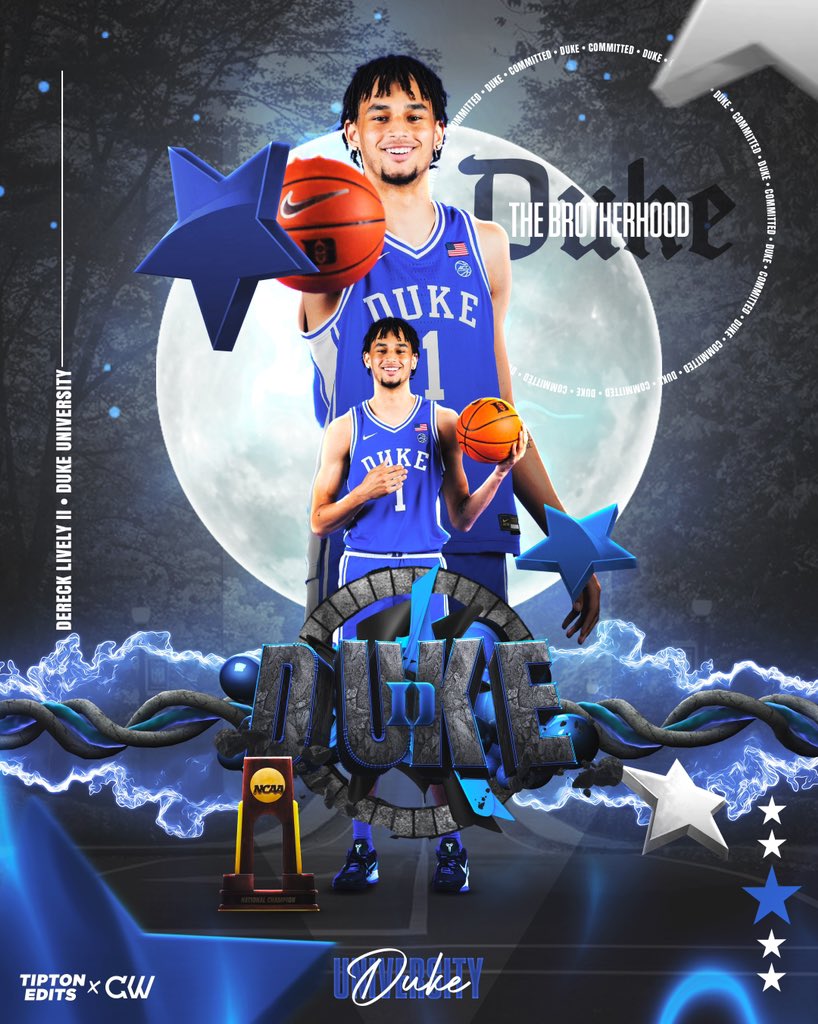 By ADAM ZAGORIA Five-star big man Dereck Lively II of the Westtown (PA) School and Team Final committed to Duke on Monday, giving the Blue Devils the No. 1 ranked class in the nation. The 7-foot-1 Lively chose Duke over Kentucky, North Carolina, Penn State, Michigan, USC and Florida State. Duke and Kentucky both now have three five-stars committed for 2022 as Lively joins big man Kyle Filipowski and wing Dariq Whitehead along with four-star guard Jaden Schutt. They remain involved for five-star forward Mark Mitchell and four-star guard J.J. Starling. Duke’s 2022 recruits will suit up in the first year of the Jon Scheyer Era. “You come here and the Duke Brotherhood ain’t going down or anything like that just because Coach K is stepping down,” Lively said in June of Duke’s message in the wake of Coach K’s impending retirement. “He’s still going to be there, the development is still going to be there and just the overall feeling of being a Duke athlete is still going to be there because I’m still going to be able to be coached by Coach K, he’s still going to be staying in the mix and staying in the whole development process throughout my recruitment if I go there.” Ranked the No. 1 center in 2022 by 247Sports.com, Lively averaged 8.4 PPG (56.5 FG%), 6.7 RPG and 3.7 BPG on the EYBL circuit and was named first-team All-Peach Jam after helping Team Final win the title. “What makes Dereck so special is his relentless work ethic,” James Johns, who coached Team Final to the Peach Jam title, told ZAGSBLOG. “Every time he steps on the floor you see something that he’s improved upon. He’s very easy to coach because of his understanding of the game. I always knew what I was getting from him. He’s going to play hard, compete, make the game easier for guys because of his shot blocking ability on the back end of your defense. Then being able to come down a make 3’s and finish. He’s going to make his next coach very happy. I love him.” Lively visited both Kentucky and Duke in June, but in the end chose the Blue Devils. Westtown coach Seth Berger raved about Lively’s upside going forward. “Dereck in high school is a league champ, a state champ, and an EYBL champ,” he said. “I think he will also be an NCAA champ, an NBA champ, an All-Star and a Hall of Famer because he cares most about is winning, and his effort and decisions on the court reflect that.” With the Name, Image and Likeness developments coming to college basketball, Lively also stands to make some money, as The New York Times reported. But he said his college decision wouldn’t be based on financial reasons. “I’m still trying to get my head around that, it really just came out of nowhere with the NFT and paying you about that,” he said. “I’m not paying it that much attention, I really just leave up to my mom. His mom, Kathy Drysdale, is a marketing director in the Penn State athletic department “It’s not really something I’m going to be looking into that much….The money is not really something I’m going to be making my decision off of because my goal is to get to the league for a one-and-done.” After this week, six players from the Team Final squad that won Peach Jam will have reclassified or committed to college following Lively, Jalen Duren (Memphis), Corey Floyd Jr. (UConn), Justice Williams (LSU) and Jameel Brown (Penn State). Blair Academy guard Otega Oweh is due to announce Friday. Follow Adam Zagoria on Twitter Follow ZAGSBLOGHoops on Instagram And Like ZAGS on Facebook