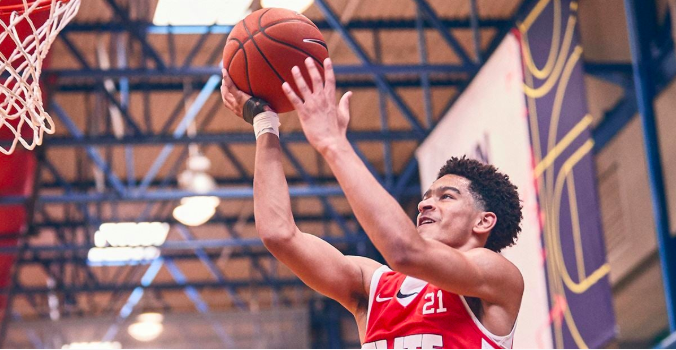 By JACOB POLACHECK & ADAM ZAGORIA Rodney Rice, the 6-foot-4 shooting guard from The Bullis School (MD), took unofficial visitS to Kentucky (Feb. 28) and Louisville (Feb. 29) this past weekend. Rice is ranked as the No. 56 overall player in the Class of 2022 and the No. 12 ranked shooting guard, according to 247Sports. “Both visits went well,” said Angelo Hernandez, Team Durant’s 16U coach and director of recruiting. “At Kentucky, we got a chance to get to know the coaches and tour the facilities (Rupp Arena and the practice facility). They have been in touch since the DMV Live period last June. They like big skilled guards and Rodney is definitely on their radar. They will be watching him very closely this spring/summer. “Louisville was a great trip,” he added. “Coach [Chris] Mack and the staff showed Rodney a lot of love and is making him a priority moving forward. He, too, likes big skilled guards and thinks Rodney would be a great fit. “Unofficial visits are great. They have allowed Rodney the chance to get to know staffs and their styles sooner than later. He can see what he likes, what he doesn’t like, what resources are available for development, academic resources, etc. “Georgetown, Maryland, Alabama, South Carolina, Michigan and Louisville have been showing the most interest lately. We have communicated with several other Power 5 schools, but generally speaking, it’s early in the process for sophomores. June 15th is the date recruiting officially starts for 2022 kids.” Kentucky also hosted 2021 wing Deivi Jones and 2022 combo guard Skyy Clark. Clark is ranked as the No. 18 overall player in the Class of 2022 and the No. 1 ranked combo guard, according to 247Sports Photo: Jon Lopez/Nike Follow Jacob on Twitter Follow Adam Zagoria on Twitter And Like ZAGS on Facebook