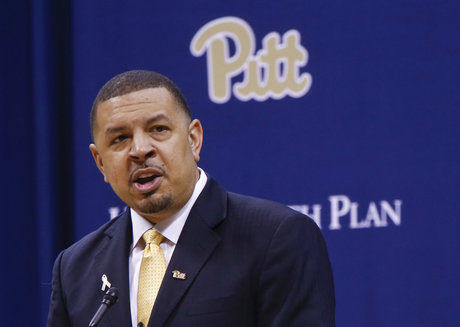 By ADAM ZAGORIA BLAIRSTOWN, N.J. — During his seven-year stint on Mike Krzyzewski’s staff at Duke, Jeff Capel recruited the likes of Marvin Bagley, Harry Giles Brandon Ingram to the Blue Devils. He was instrumental as Coach K and Duke essentially overtook John Calipari and Kentucky as the top destination for one-and-done products like Zion Williamson, R.J. Barrett and Cam Reddish. Now that Capel is heading into his second year as the head coach at Pittsburgh, he’s no longer targeting projected one-and-done guys like that. Instead, he focuses on players he believes can develop over time at Pitt. “Well, it’s different,” he told me last week during a recruiting event at Blair (N.J.) Academy. “How we recruit at Pitt is different than anything they do at Duke. They’re able to get guys that are one-and-done, guys that it really doesn’t matter where they go, they’re going to be pros. One of the biggest things for us at and I knew this when we took the job, is development.” Capel points out that sophomore point guard Xavier Johnson is currently projected as the No. 44 pick in the 2020 NBA Draft, according to ESPN.com. (Duke has four projected first-round picks in Matthew Hurt, Tre Jones, Wendell Moore and Vernon Carey.) Pitt sophomores Trey McGowens and Toney, both top-150 recruits who should have been seniors in high school last year before reclassifying, also have a chance down the road, Capel said. “I think all of our guys that were freshmen last year, I think you see that [development],” he said. “But Xavier’s probably the best example of that. He’s got a chance. I mean, all three of them have a chance.” In the recent NBA Draft, the ACC set a record with 13 draft picks, including a record six in the lottery, led by Williamson and Barrett at Nos. 1 and 3, respectively. Asked if that makes him feel pride or jealousy, Capel said, “It makes me feel proud. I grew up in the ACC so I’ve always felt that our league was the best basketball league in the country.” Pittsburgh went 14-19, 3-15 in the ACC in Capel’s first year at Pitt after the team finished 8-24, 0-18 the year before under Kevin Stallings. Still, Capel points out the program was a No. 1 seed in the NCAA Tournament as recently as 2011. “We’re at a program that has , we’re in the No. 1 basketball conference,” he said. “Pitt hasn’t had success in the ACC and that’s what we need to do. We need to build on that. And we need guys that believe in themselves and believe in what we’re doing.” Pitt’s four-man recruiting class for 2019, which includes Bishop Loughlin small forward Justin Champagnie, is ranked No. 51 nationally by 247Sports.com. As for 2020, Capel was at Blair for a number of key recruits, including wing D.J. Gordon and forward Noah Collier. He is also recruiting big man Elijah Hutchins-Everett, who may reclass to 2021. Capel is also expected to be at Archbishop Molloy Friday night for 2020 Stepinac point guard R.J. Davis, who is coming off an official visit to Georgetown and has a load of suitors. Pitt recently offered Roselle Catholic shooting guard Niels Lane, who will be playing in Philadelphia on Sunday along with 6-10 teammate Cliff Omoruyi. Pitt is expected to be on hand for both players. Pitt on Sunday is also hosting transferring Delaware transfer Ithiel Horton, the 6-3 former Roselle (N.J.) Catholic guard who averaged 13.2 points and 3.1 rebounds last season. “It’s a grind every night [in the ACC] and you have to get better,” Capel said. “I want guys that are excited about the challenge, that to come and compete against the Dukes and the North Carolinas and the and the Virginias now. I want guys that aren’t afraid, that want to take the challenge to try to beat those guys.” Follow Adam Zagoria on Twitter And Like ZAGS on Facebook