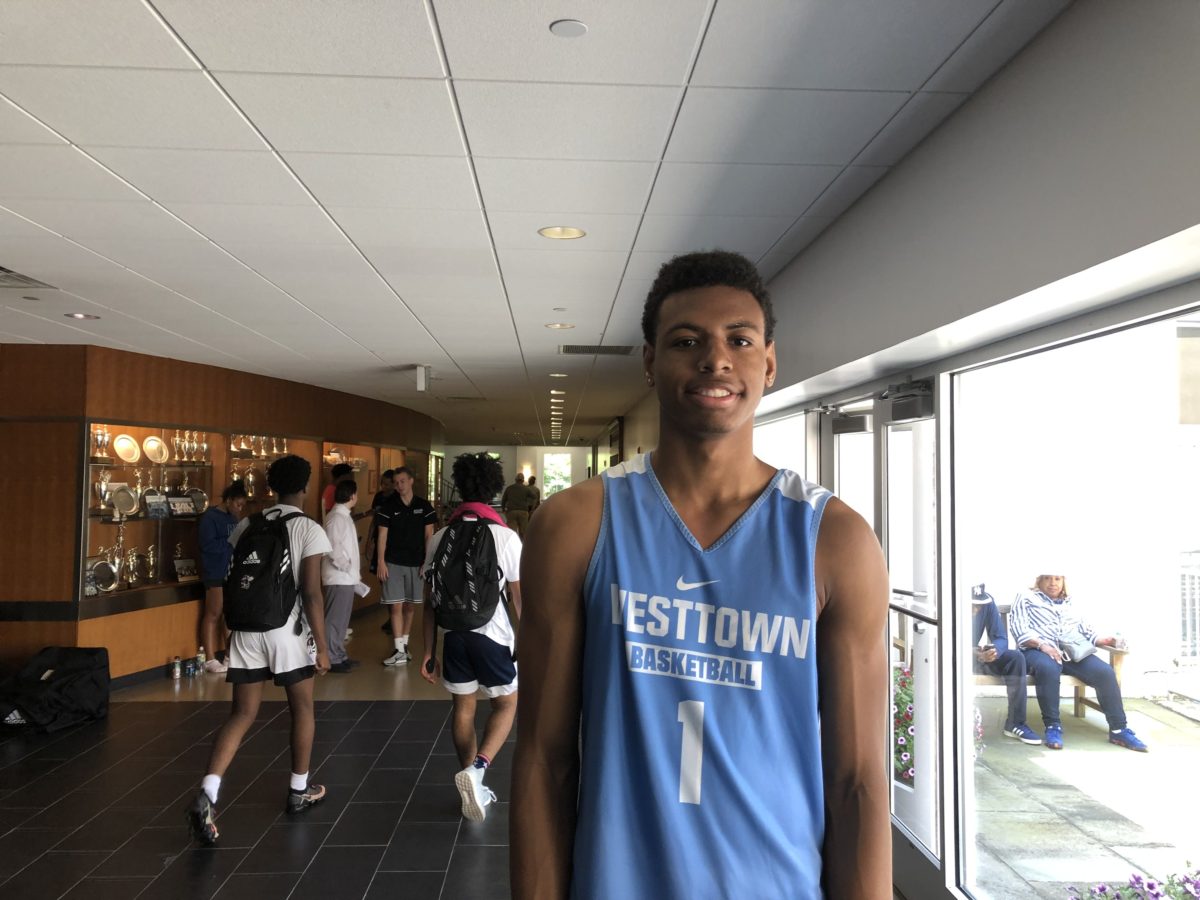 By ADAM ZAGORIA BLAIRSTOWN, N.J. — Syracuse and UConn appear to be leading the charge for Noah Collier, the Class of 2020 forward from Westtown School (Pa.) and Team Final. Both schools went twodeep for the 6-foot-8, 205-pound forward on Saturday at Blair Academy. Syracuse’s Jim Boeheim and Gerry McNamara and UConn’s Dan Hurley and Tom Moore all took up early position for Collier’s first game. Asked what schools were working the hardest, Collier said, “Probably Hurley and Boeheim, UConn and Syracuse are definitely people who keep in a touch a lot.” As for Syracuse, Collier said, “Syracuse definitely thinks I’m long and athletic and I would fit great into their system. Someone who can score the ball, rebound, play great defense and get after it. They had a lot of players like me.” On UConn, he said. “They said they like me because I can get up and down. I have chemistry with some of their players. I know Jalen [Gaffney, who played at Westtown]. We played together for two years. They love my game a lot. We had an in-home visit.” (UConn could be back in the Big East by Collier’s freshman season in college in 2020, something I addressed in this story.) Collier has also been hearing from the new Vanderbilt staff led by Jerry Stackhouse. “I’ve talked to them over the phone and by text,” he said. “They said they’re going to try to get out and see me, too.” Clemson is also making ush. “I just started talking to Clemson a couple days ago,” he said. “They’re real interested. I think they’re coming out here.” Collier previously mentioned Maryland was involved as well. “I think I’m going to take visits at the end of the summer, early school year,” he said. “I want to commit before the school year but I might be committing during the season. I don’t know.” Wherever he goes, he plans to bring “a lot of energy, vocal leadership, a hard player. I play hard. And I’m pretty versatile. I can play anywhere on the floor offensively, defensively.” He hopes to add some weight going forward, while building strength and working on his shooting and ball-handling. Follow Adam Zagoria on Twitter And like ZAGS on Facebook