UConn's return to the Big East would be a 'game-changer' in recruiting, coaches say | Zagsblog
Follow @adamzagoria

UConn’s return to the Big East would be a ‘game-changer’ in recruiting, coaches say 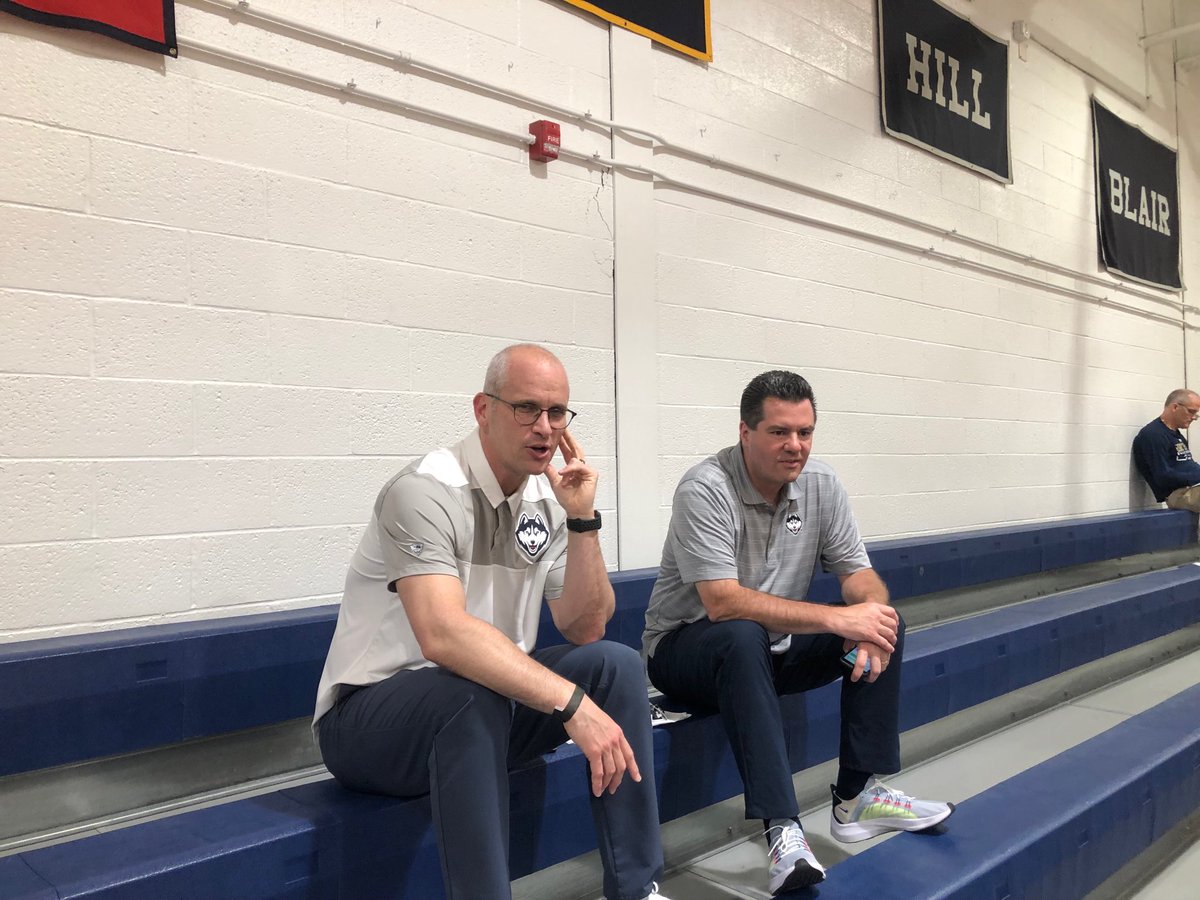 By ADAM ZAGORIA BLAIRSTOWN, N.J. –– UConn head coach Dan Hurley and assistant Tom Moore spent Saturday afternoon watching their phones blow up while they recruited at Blair Academy. Hurley and Moore couldn’t comment on the reports of UConn shifting back to the Big East Conference in 2020-21, and they’re not allowed to comment on recruits, either. But that didn’t stop several high school coaches at the event from discussing how the move would be a ‘game-changer’ for the Huskies recruiting efforts going forward. “For a top-50 guy like [Abdur-Rahim], that obviously makes UConn a totally different option,” said Blair Academy coach Joe Mantegna, who hosted the Mid-Atlantic Independent School Shootout that drew Hurley, Syracuse’s Jim Boeheim, Virginia’s Tony Bennett, Pitt’s Jeff Capel and Cal’s Mark Fox, along with a slew of high- and mid-major assistant coaches. “Not to say they’ll get him,” Mantegna added, “but to say they look totally different on that list and they can sell totally different things that I think is a real benefit to the Northeastern’s highest-level guys.” UConn has won four NCAA championships since 1999 but some of the luster has disappeared from the brand in recent years, and that coincided in part with the move in 2013 to the American Athletic Conference, a geographic hodgepodge that didn’t include UConn’s natural geographic rivals like Syracuse, St. John’s, Georgetown and Villanova. When UConn won it’s NCAA title in 2011, it was led by New York City native Kemba Walker and in 2014 Boston-area guard Shabazz Napier was the star. Hurley and Moore are at Blair focusing on top 2020 prospects Abdur-Rahim, the son of former NBA standout Shareef Abdur-Rahim, as well as Andre Jackson and Noah Collier. All three will be freshman in the 2020-21 season when UConn would ostensibly be back in the Big East. The 6-foot-7 Abdur-Rahim is considering UConn along with Virginia, Michigan, Notre Dame Louisville. He has upcoming official visits to Virginia and Michigan, and UConn’s impending move may not impact him one way or another. But Mantegna thinks it will be a factor going forward. “The Big East has a lot of sway around here and obviously I know that that puts UConn back with the same company that they were always with,” Mantegna said. “And people our age think of UConn as a Big East school, and I think that changes everything for recruiting for Danny.”

Mantegna, who coached longtime NBA wing Luol Deng, said the advantage of being in the Big East is that kids and their families can see UConn play at a variety of local schools, including St. John’s (at MSG), Seton Hall, Villanova Providence. In the American Athletic Conference, UConn has no local rivals and plays schools like Wichita State, Memphis, Temple, Houston, Tulane and Florida schools like UCF and USF. “The guys from the East Coast don’t want to go play at Tulsa and Houston and those places,” Mantegna said. “No disrespect, I know those teams are really, really good, but their families can’t see them play and also frankly we just don’t care as much about Midwestern basketball in the Northeast, whether that’s right or wrong, and that really hurts their recruiting. And I think now that they’re back in the Big East, they have a totally different sway in their recruiting.” Jackson is a 6-7 wing guard from Albany Academy who is being courted by UConn, Syracuse, Iowa UCLA. He was just hearing about the UConn/Big East news Saturday morning and wasn’t sure it would impact his move, either. “The conference doesn’t really matter because schools like Memphis and Houston in that [American] Conference so I’m not really worried if they’re in or not in it,” he said of UConn.

Still, Albany Academy coach Brian Fruscio agreed with Mantegna that a return to the Big East would be a boost for the Huskies. “Yeah, I think it will influence kids because now if they’re a Northeast kid, not only can your parents see you play at home, now you can see them play on the road. You can see them play at St. John’s, Seton Hall, Providence, Villanova so I can drive and my parents can see me play,” he said. “So I think from a logistical standpoint it brings them into being a major player that they always were. Let’s not forget they’re a decent brand. That could be really good. Then you have an aggressive talented coach like Danny Hurley. “That’s a game-changer for college basketball. It just sense, geographically and rivalry[-wise]. and now all of a sudden, that’s an extra 5,000 people who will give up their Wednesday night to go see a game.” Collier is a 6-8 forward from the Westtown (PA) School who is being prioritized by UConn and Syracuse. He also mentioned Vanderbilt and Clemson.

Noah Collier says UConn and Syracuse are among those working the hardest. Said Clemson and Vandy also involved. pic.twitter.com/kCZ0vOqu9V

Westtown coach Seth Berger said every kid is different in that some want to stay close to home and some want to go far away. Still, he said, ““The Big East has a one of a kind tradition and getting UConn back would be great for the the Big East and great for UConn.” Follow Adam Zagoria on Twitter And Like ZAGS on Facebook