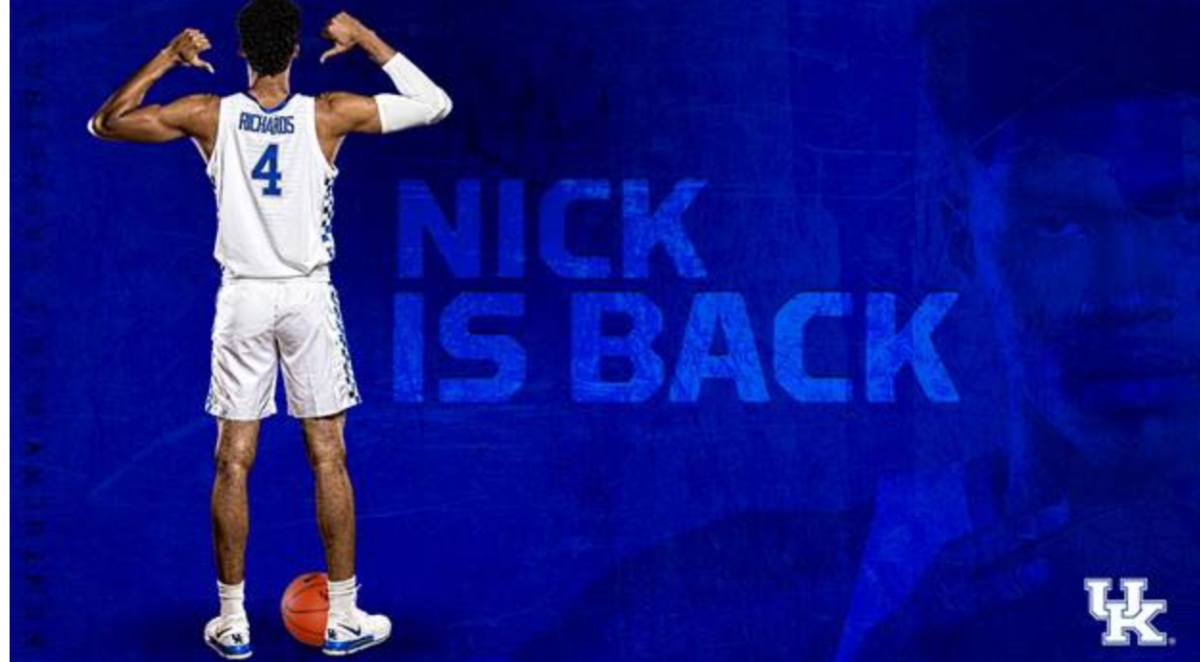 (Release via Kentucky Athletics) After testing the NBA waters and going through the NBA Draft process for the first time in , Kentucky men’s basketball forward Nick Richards has decided pursuing his while strengthening his future professional prospects. The big man is coming back to UK for his junior season. The 6-foot-11 forward announced his return on social media on Tuesday.  “First off, I want to thank God, the man up above, for without him I couldn’t do any of this,” Richards said. “Next, I want to thank my family: my mom, my aunt, my sister (and) my brothers. I want to thank my teammates and the coaching staff, for without them I wouldn’t be here. They pushed me in the right direction that I needed to be to where I am today. “These past two years have been the best of my life. It’s been an incredible experience. I’ve learned a lot, but the job’s not done yet. BBN, are you ready for year three?” Big Blue Nation will certainly be thrilled for the return of the most experienced Wildcat on the 2019-20 roster. Richards will join guards Ashton Hagans, Immanuel Quickly, Brad Calipari and forward/guard Zan Payne as returning players from the 2018-19 team. Freshman forward EJ Montgomery, who like Richards was going through the NBA Draft evaluation process, has not yet made a decision. He has until 11:59 p.m. ET Wednesday to notify the NBA, via written statement, that he is withdrawing from the 2019 NBA Draft, as well as submit a written statement to UK that he plans to resume his college career.  Underclassmen PJ Washington, Tyler Herro and Keldon Johnson have already announced their intentions to stay in the NBA Draft. Additionally, forward Reid Travis and walk-on guard Jonny David have exhausted their eligibility, and guard Jemarl Baker Jr. has transferred to Arizona. Regardless of what Montgomery decides, the Wildcats are slated to lose their top four scorers, top four rebounders and top three 3-point shooters from the 2018-19 squad that went to the Elite Eight. That’s where Richards’ returning experience and leadership will loom large. Richards has appeared in all 74 games of his two-year career with the Wildcats, making 40 starts. He has averaged 4.5 points, 3.9 rebounds and 1.1 blocks per game to this point with a career field-goal percentage of 60.8 percent. He also makes free throws at a 70.4-percent clip. The Kingston, Jamaica, native helped the Wildcats to a Southeastern Conference Tournament title as a freshman and an Elite Eight appearance in the NCAA Tournament as a sophomore. “I was fully supportive of Nick going through the NBA Draft process for the first time in his career to see where he stood,” UK head coach John Caliapri said. “I’m happy with where Nick and his family ended up and I’m excited to continue to coach Nick because I know how special he can be. I’ve told him, ‘If you come back, I’m expecting you to be one of the best big men in the country.’ There is no reason he can’t be. There is nothing that Nick hasn’t seen at this point, and he knows what my expectations are for him in his junior season. I want him to dominate the game and affect it on every single possession.” In 2018-19, Richards led the team in blocks with 47 and paced the team in swats in 16 games, including a career-high five blocked shots in the win over Kansas. He snared a career-high 19 rebounds in a win over Southern Illinois, matching the entire SIU squad’s total for the game. The 19 boards also equaled Michael Kidd-Gilchrist for the most in a game under Calipari. Richards also scored 10 points in a win over Winthrop and posted 14 on the road at Vanderbilt. For his career, Richards has charted nine double-figure scoring efforts and three double-figure rebounding games. He’s led the team in rebounding in 12 games and 28 games in blocks. Over two seasons, he has logged three or more blocks in a game on 12 occasions. Richards will have plenty of help next season with the returning backcourt of Hagans and Quickley, the No. 2 ranked signing class (which includes guard Dontaie Allen, forward Keion Brooks, walk-on forward Brennan Canada, guard Johnny Juzang, guard Tyrese Maxey and forward Kahlil Whitney), plus Bucknell graduate transfer Nate Sestina, but none of them possess Richards’ length (7-foot-5 wingspan) or size (6-11, 244 pounds).