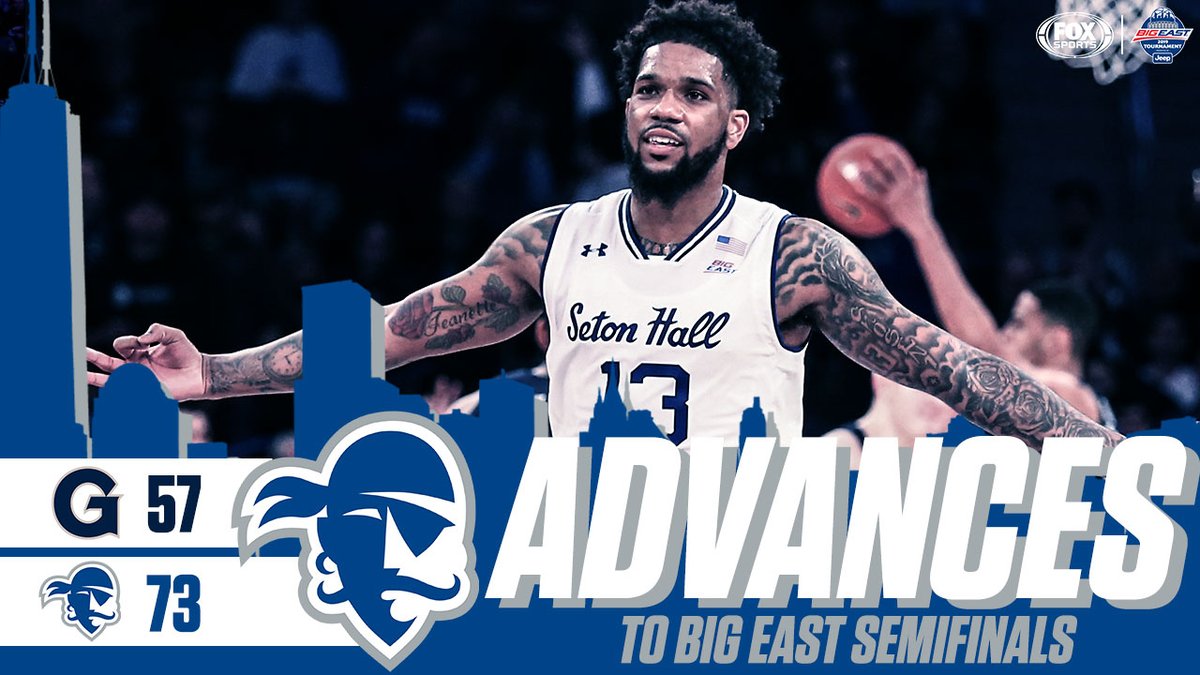 By ADAM ZAGORIA NEW YORK –– For a period in the first half Thursday night at Madison Square Garden, Myles Powell had more points than the entire Georgetown team. At one point after he drained a 3-pointer, it was Powell 29, Hoyas 26. The junior guard finished with a game-high 31 points on 11-of-21 shooting as No. 3 Seton Hall drilled No. 6 Georgetown, 73-57, to advance to a semifinal showdown with No. 2 Marquette on Friday night. No. 1 Villanova will face No. 4 Xavier in the first semifinal. “I’m going to be back, I’m going to be ready,” he said on FS1. “We got a great Marquette team coming up and we want to get back to the hotel, ice up and get ready.” Powell’s performance came in front of Knicks owner Jim Dolan and President Steve Mills, who are scouting talent for the Knicks rebuild. Their ultimate goal is to land Duke freshman Zion Williamson, who returned from a five-game absence to drop 29 points on 13-of-13 shooting and  14 rebounds on Syracuse in the ACC Tournament.

“It’s March and anything can happen…It’s gonna be a goodie for the @BIGEASTMBB Semifinals tomorrow.”

Marquette drilled No. 7 St. John’s, 86-54, in the first game after losing two regular-season affairs to the Johnnies. Still, St. John’s appears headed to the Big Dance despite losing 5-of-7 down the stretch. At this point, it appears the Big East will send four teams dancing: Villanova, Marquette, Seton Hall and St. John’s. Xavier remains alive as well. Georgetown’s slim NCAA Tournament chances effectively came crashing down with the loss. Myles Cale added 14 points for Seton Hall, which came into the Big East Tournament having downed Marquette and Villanova to ensure a spot in the NCAA Tournament for a fourth straight season. Sandro Mamukelasvili added 12 points and 10 rebounds.

Check out some of the highlights of our win tonight! #HALLin pic.twitter.com/dMwbFz6PGf

The Pirates entered the day as a 10 seed via Jerry Palm of CBSSports.com, and remain alive for their second Big East Tournament championship in four years after winning in 2016 over Villanova. “It’s March, anything can happen,” Powell said. “That’s this time of year.” Graphic: FoxSports 1 Follow Adam Zagoria on Twitter And like ZAGS on Facebook

After wild night at MSG, Seton Hall and Villanova will square off for Big East Tournament title