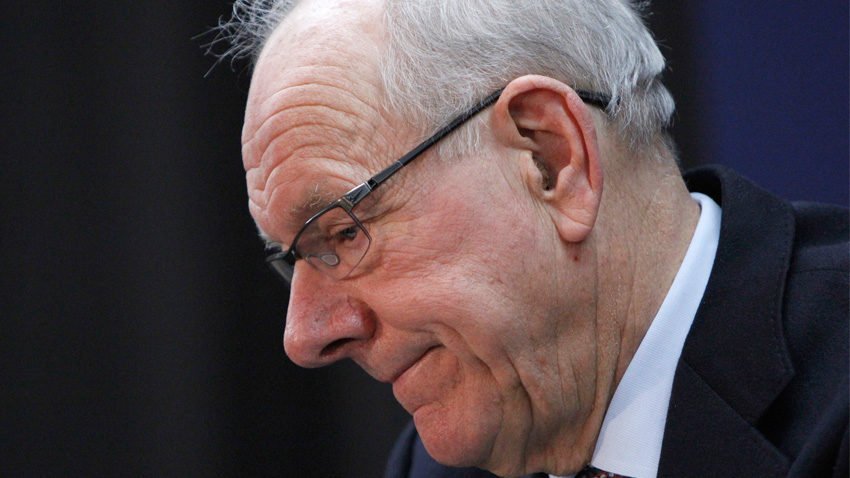 SYRACUSE, N.Y. (AP)  — Syracuse basketball coach Jim Boeheim will not be charged in last month’s fatal highway accident and the case is closed. Boeheim was “not reckless,” Onondaga County District Attorney William Fitzpatrick said Thursday. Fitzpatrick added his decision came after reviewing the police accident report. Boeheim declined to comment, the athletic department said. According to the report, Boeheim was driving 66 mph five seconds before the night crash and about 54 mph at impact. The speed limit is 55 mph. The disabled car on the dimly lit highway was going 67 mph when it skidded out. The report concluded Boeheim’s driving was “not reckless, unreasonable or with gross negligence.” Also, speed was not a contributing factor even though the black boxes in both vehicles indicated both cars traveling just above the speed limit. There was no evidence drugs or alcohol played a role. Boeheim was on the highway after a Feb. 20 game when he accidentally struck 51-year-old Jorge Jimenez around 11:20 p.m. The 74-year-old Hall of Fame coach swerved his SUV to avoid the black Dodge Charger that had skidded to a stop on the slick roadway and was resting perpendicular across most of two lanes. He then struck Jimenez, who had exited the Dodge and was standing near the guardrail. Jimenez died a short while later at a nearby hospital. The report said the Dodge would not have passed a New York state inspection because of two bad tires and inoperable rear marker lights. The accident happened a couple hours after Syracuse had upset then-No. 16 Louisville. Boeheim addressed the team the next day but did not take part in practice. He returned to the bench to coach against top-ranked Duke on Feb. 23 and received a rousing ovation from the record-Carrier Dome crowd of 35,642. Boeheim, in his 43rd year as head coach at his alma mater, said he coached the game because he felt an obligation to his players. Afterward, he appeared emotionally spent. “I can’t describe the feelings,” he said. “I don’t think I can make anyone understand who hasn’t been there. I don’t. “I’ve always felt in life, you get a lot of things you have to overcome. There’s nothing like this when a human life is lost and you are there. I can’t describe it to you.” Boeheim said he had been in touch with the Jimenez family. “I intend to try and do that as I can in the future,” he said. “This is isn’t about me, it doesn’t matter how I feel. It’s about how they feel and what’s happened to them. There’s just nothing I can say about it.” Jimenez’s funeral was last week. Area businesses donated to the costs. Follow Adam Zagoria on Twitter And like ZAGS on Facebook