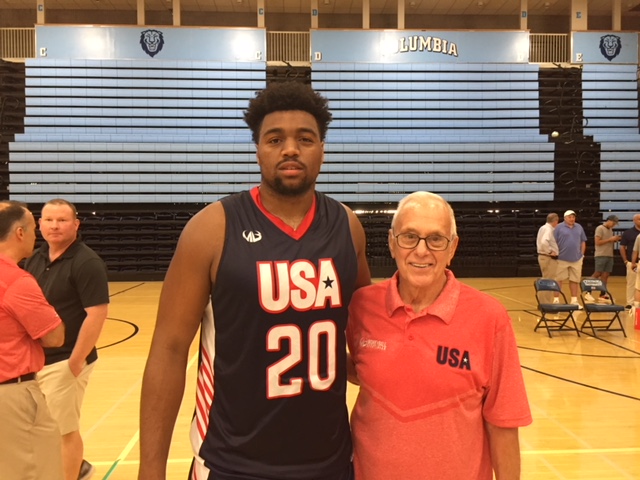 By ADAM ZAGORIA NEW YORK — Evan Battey thought he was just going to play a simple game of pickup basketball with his friends last Dec. 26 at a 24 Hour Fitness near his home in View Park, Calif. Battey was home on break from the University of Colorado, where he was sitting out an academic redshirt season under coach Tad Boyle. But out of nowhere, his legs started to give out from underneath him, he felt depleted of energy and even communicating the problem to his friends on the court was difficult. He had suffered a stroke despite being just a freshman in college. “I lost feeling in my whole right side, from my head to toe,” the 6-foot-8, 265-pound power forward recalled this week at Columbia University where he was training with the USA East Coast All-Stars. “I couldn’t walk, I couldn’t use my right hand, I couldn’t speak.” After Rosalind Lewis, Battey’s mother, learned of the incident, she drove him to a nearby hospital, but he soon suffered a seizure while in an ambulance to a nearby stroke center, according BuffZone.com. “It really scared the heck out of me,” Earl Battey, Evan’s father, told BuzzZone.com. “Just two days before he was showing me this video of him dunking this basketball where he’s throws the ball up in the air, he bounces out of the air and grabs it one-handed and slams it. How can it be? “Here is a kid who’s actually in the best shape of his life. This kid came home with his shirt off flexing on me and everything showing me his new defined body. Now here I am standing there in the emergency room at his side.” To this day, Evan Battey doesn’t know what caused the stroke. “I went through every test possible and we found nothing,” he said. “They stuck that nasty thing down my throat, they took a picture of my heart. It was scary.” He thinks it has something to do with the massive and sudden weight loss he put his body through, dropping from about 300 pounds to around 250 in order to get in shape for basketball. “I think it was working hard, overworking myself,” he said at Columbia. “I was down 50 pounds in like three months, so intense workload and all that.” By mid-January, Battey was back on the Colorado campus going through what turned into four months of intensive physical therapy to recover. “I went through an intense amount of physical therapy to get my right side back,” he said. Still, he thought he might never play basketball again. “I mean, I considered that because we couldn’t find the cause of it,” he said. “I’m not sure if I want to play because it could happen again, and I don’t want to go through this, the not being able to speak part, again.” To this day, his speech is still slightly slurred, something he mentioned as he spoke. Battery met with Boyle after the stroke, and the coach understood Battey’s career might be over before it even started. The NCAA ruled last fall that Battey couldn’t play the 2017-18 season because he didn’t graduate from high school in four years. He repeated the ninth grade at the Los Angeles Center for Enriched Studies. Battey averaged 24 points as a junior and wasn’t permitted to play as a senior at Villa Park High School in 2016-17 season because he’d exhausted his eight semesters of high school eligibility. “I had some unfortunate times,” Battey said. “I wasn’t the best student in ninth grade and I failed it, obviously.” Now after two seasons sitting out, Boyle understood Battey’s career might be over before it began. “We didn’t know, we didn’t know,” said Boyle, who watched Battey practice at Columbia this week. “He’s gone through more tests, that poor kid, than anybody.” Battey recently played in some Drew League games in Los Angeles, his first action in two years. He played in the three-day minicamp for the East Coast All-Stars under head coach Larry Brown ahead of the team’s trip to Venice, Italy this week. There they are slated to play games against Germany, Italy, the Netherlands and Vicenza Elect at the Pala Goldoni Vicenza Arena from Aug. 3-6 before returning to the U.S. Aug. 8. “He hasn’t played in two years, that’s why this opportunity to play with Coach Brown, we jumped at it,” said Boyle, who played for Brown at Kansas. At Columbia, Battey ran up and down the court with passion and aggression, dunking the ball in drills and hitting putback layups in games. “I’m feeling excited, too, really excited,” he said after the second of two practices on Tuesday.

Evan Battey of @cubuffs (No. 20) is back on the court after suffering a stroke in December. His games this week with @East_Coast_BBC in Italy will be his first since the stroke. pic.twitter.com/J1V4bml4V6

After all he’s been through, Battey is just happy to be back on the court, playing the game he loves. “He’s an unbelievable spirit,” Boyle said. “Not just a basketball player, but an unbelievable person.” “I have a different outlook on life being here now,” Battey said. “I’m learning how to appreciate things much more. I learned how to say hi to everybody. I already was a social guy, but I’m just appreciating everything we do on Earth, appreciating all that. “I’m grateful to be here, I’m grateful to play the basketball I love, so whatever happens, happens.” Follow Adam Zagoria on Twitter And like ZAGS on Facebook