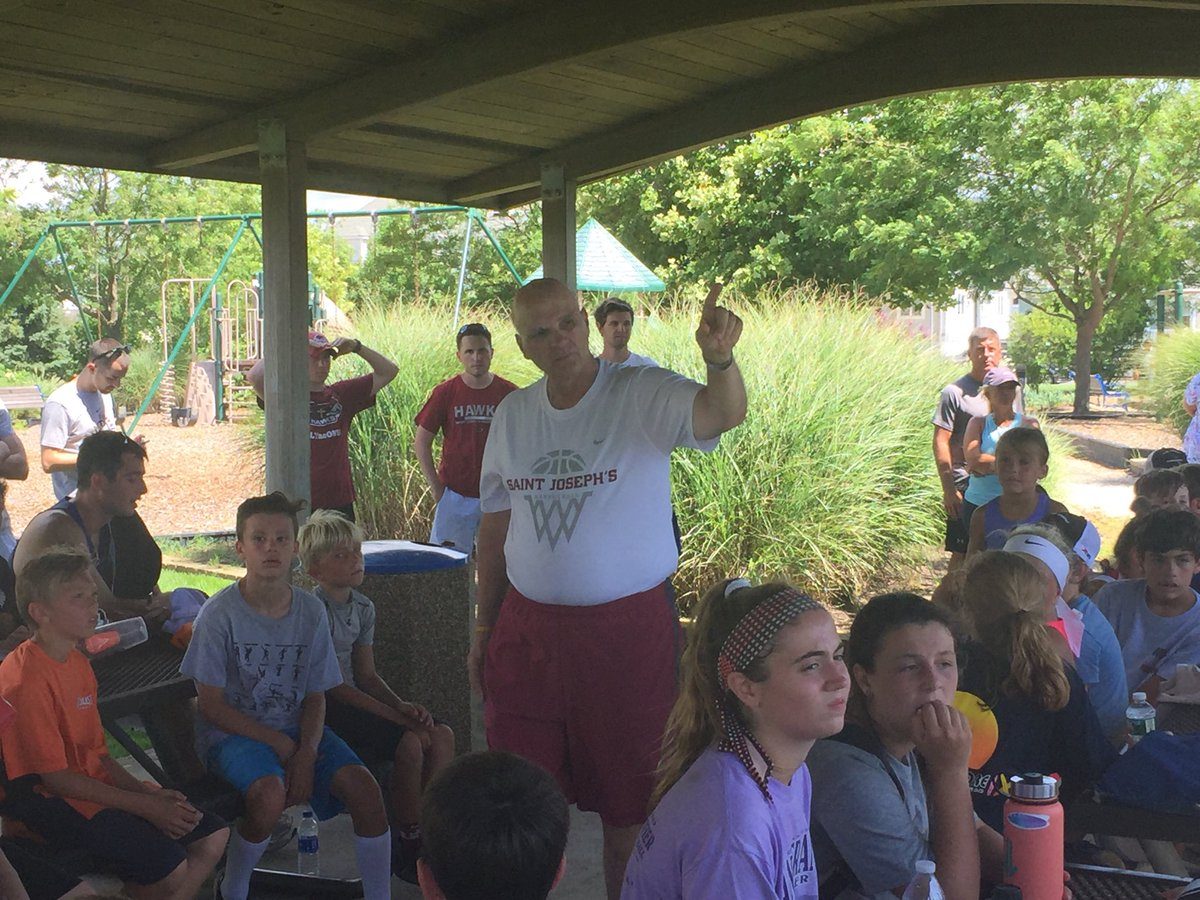 By ADAM ZAGORIA AVALON, N.J. — Longtime St. Joe’s head coach Phil Martelli believes the proposed changes in the NCAA recruiting calendar are a good first step toward fixing the problems that led to the FBI investigation of bribery in the sport and the arrest of 10 people, including four Division 1 assistant coaches, last fall. And Martelli envisions an increased emphasis on high school events in June — such as camps, leagues and potentially combines — as college coaches get less access to sneaker-sponsored events in July. “From a coach’s view, when that initial report came out, it wasn’t four coaches that were indicted, all coaches were indicted,” Martelli, who serves on the Subcommittee for Non-Scholastic Basketball and also on the Men’s Basketball Oversight Committee, told me at his basketball camp here. “Everybody looked like the problem. This is an attempt to say, ‘We have to fix it, we have to fix it.’ “We know that what happened can’t happen again,” Martelli added. “The [Rice] Commission was very clear. The Commission said there will be change or they’ll take over. So at least to this point in time the NCAA coaches have had a say in the change that was to come. Otherwise, we were going to be sitting on the side.” Matt Norlander of CBSSports.com reported earlier this week “that the NCAA Board of Directors (which oversees all matters in Division I) and the Board of Governors (which oversees NCAA matters at all levels) …are expected to vote the proposals into legislation on Aug. 7 and 8 in Indianapolis.” Martelli said the vote will take place on Aug. 8. “Some of it will go into effect as early as August 15th,” Martelli said. He was referring to proposed changes in visits by student-athletes, additional hours on the court for coaches and additional people on the court. “That could happen as soon as school starts. “There’s no delay here. When we start school Sept. 1, next year’s calendar, ’18-’19, will be different. There’s no doubt in my mind.” Martelli broke down several aspects of the new calendar: **SEPTEMBER-MARCH WILL REMAIN UNCHANGED “Recruiting September-March will be the same,” he said. “It will be high school practices, high school games, guidance counselors, visits to schools.” **HOW APRIL WILL LOOK “Next April will be the same as it normally would [with] the sneaker leagues or certified events,” he said. “But next April and April 2020 are different because three weekends in April are covered by Final Four, Easter and SAT testing. There cannot be certified events those weekends. “April will also now include, when the certified event ends, four days to go back into the high schools, so that’s new.” **HOW JUNE WILL LOOK “In June, high school events have to be certified by the state association,” Martelli said. “Friday, Saturday, Sunday. It was Thursday, Friday, Saturday. In addition, two days at the NBA Top 100 Camp.” Martelli said he envisions the growth of high school events such as Jimmy Salmon’s “The Weekend,” which featured top New Jersey high school teams competing in front of college coaches this past July. Events like that could now thrive in June. “I’m a camp guy, I would think about mimicking Jimmy’s event,” he said

Martelli said he thinks you will also see the rise of “six-day summer leagues where teams play twice a night” on a high school campus as well combines in June. “I think you see the top 200 seniors in New Jersey all show up at Roselle [Catholic] and they do the drills similar to the NBA Combine,” he said. “Pretty cool.” **HOW JULY WILL LOOK “July is going to be four days of AAU certified events,” Martelli said. “I think it’s dependent on what the sneaker companies do with their dates.” That means coaches could still attend the prestigious Peach Jam, as well as Adidas and Under Armour finals in July. (Some coaches have suggested that Adidas, which helds its finals in New York last month, will need to shift to Atlanta to take advantage of the coaches being in Georgia/South Carolina for the Peach Jam and the Under Armour finals.) “And all of this has been a coroboration between sneaker, USA Basketball and the NCAA,” he said. There will also be four regional camps at the end of July. “Whether they’re going to be five-day or six-day camps, how kids are going to be selected, that’s still to be worked out,” Martelli said. Many coaches have been quoted directly or anonymously indicating they don’t like the idea of submitting their recruiting lists for regional camps because they don’t want others to see who they’re recruiting, or don’t want to reveal a potential sleeper. Martelli dismissed those concerns. “Nobody’s asking them to, that’s not been determined yet,” he said. As for how the regional campers will be chosen, he said, “It could be national evaluators. It could be high school coaches making recommendations. It could be kids making All-State, there’s a lot of differnet ways that have been discused. It’s been a massive, massive, massive undertaking.” As for the idea that coaches could hide players by not submitting an accurate list, Martelli said, “I just don’t believe that there’s that many kids that you’re going to hide. I go the other way. I believe leagues are going to have to collude to make sure that they see kids. So the Northeast Conference wants to see Dave Duda’s son, who’s that level of player, they all are going to have to vote. Nobody’s going to get overlooked, nobody.” He also dismissed Tom Konchalski’s belief, which I wrote about earlier, that players who aren’t invited to the camps will sue. “I respect him and you, it’s silly,” Martelli said. “That’s silly because does the 69th kid from the NBA Combine, does he sue because he doesn’t get picked? Does the 69th team from the NCAA Tournament sue? “One, NCAA legal has been all over this and two, let’s say it’s 2,400 [kids at regional camps], 1,000 kids got scholarships last year so where are those sleepers?” As for whether there will be a national camp in July, Martelli said he hadn’t been notified of plans for that. WILL THESE CHANGES FIX THE PROBLEM? OK, so the recruiting calendar is being changed. Will that alter the root problems that led to coaches and schools paying for players? “This is the result of an awful lot of conversation, intense converstaion, and an awful lot of cooperation,” Martelli said.  “I think these changes are necessary to see if they’ll make a difference. No one has a crystal ball. I can’t say to you this is absolutely the case.” Follow Adam Zagoria on Twitter And like ZAGS on Facebook