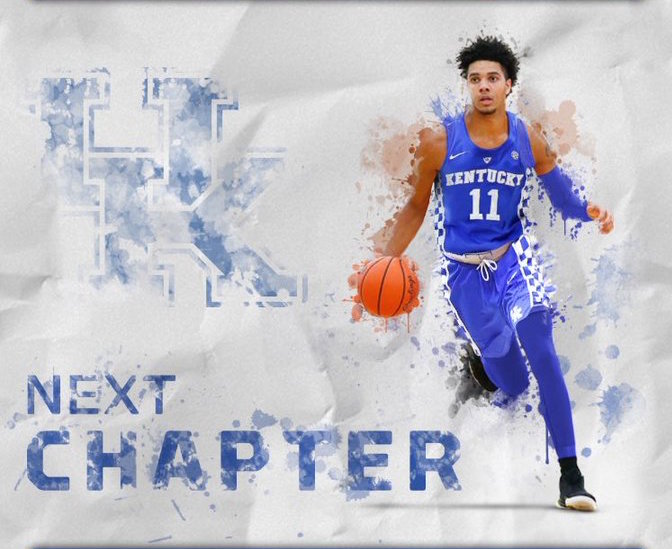 By ADAM ZAGORIA Dontaie Allen, the 6-foot-6 small forward from Pendleton County (KY), committed to Kentucky during his visit on Wednesday. “Kentucky has always been in his heart,” Thomas Allen, the player’s father, told the Herald-Leader on Thursday. “We were going to keep the options open and just see where we landed at, but by going on the visit and sitting down and having a conversation with Coach Cal, it just felt right.”

Allen averaged 31.8 points and 11.4 rebounds last season as a junior and was being courted by Louisville, Xavier, Vanderbilt and West Virginia before the Kentucky offer, per the Herald-Leader.
He’s ranked No. 83 by 247sports.com. Allen becomes the first in-state player to commit to Kentucky since Dominique Hawkins five years ago, per the Herald-Leader, and is Kentucky’s second Class of 2019 commit following point guard Tyrese Maxey.

“It starts with his good size and length for a perimeter player,” 247Sports analyst Evan Daniels told the Herald-Leader. “And then it’s his shooting ability — I think that’s probably what stuck out to me the most. He has an easy, clean stroke, and he made a bunch of them this weekend.

“I think it’s pretty clear he’s a confident shot-maker from distance. Probably a little bit better ball handler than I gave him credit for, although he’s still a little bit of a straight-line driver. But he can make one- and two-dribble pull-ups. I saw him go to the post and score. Plus, I think he’s got a very good feel for the game, especially as a scorer. I was very impressed.”