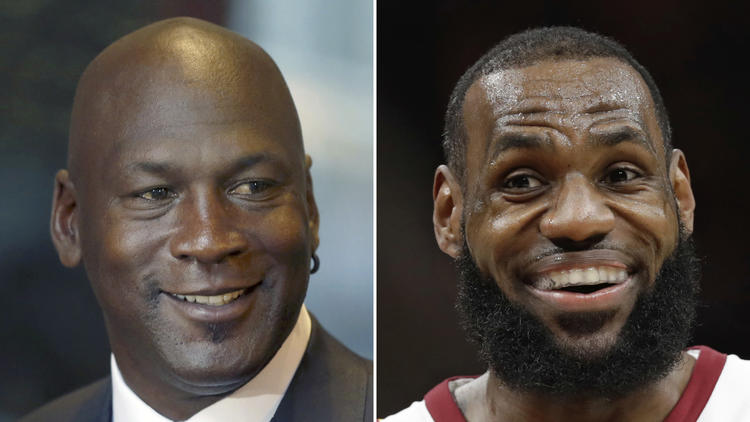 Michael Jordan has LeBron James’ back. “I support LeBron James,” Jordan said in a statement to The Associated Press. “He’s doing an amazing job for his community.”

Trump tweeted late Friday after apparently watching an interview James did with CNN anchor Don Lemon that Lemon was “the dumbest man on television” but that he “made Lebron look smart, which isn’t easy to do.” James was being interviewed about a school he recently opened in Ohio for underprivileged children.
Trump also appeared to weigh in on the growing debate over who is the greatest NBA player of all time, James or Jordan, by writing “I like Mike!”
Meantime, NBA Commissioner Adam Silver and a number of athletes and others are jumping in to defend  James.

Statement to USA TODAY Sports from NBA Commissioner Adam Silver, who is in Johannesburg, South Africa for the third NBA Africa Game (in partnership with the Nelson Mandela Foundation), in response to President Trump’s tweet about LeBron James and CNN’s Don Lemon pic.twitter.com/5Q01VX0bt6

Pro Football Hall of Famer Shannon Sharpe tweeted Saturday: “It should be beneath the dignity of a sitting POTUS to take racist shots at D. Lemon and Lebron James.”
NBA player and New Jersey native Karl-Anthony Towns tweeted: “So let me get this straight: Flint, MI has dirty water still, but you worried about an interview about a man doing good for education and generations of kids in his hometown?”

LeBron is a self-made success story from Akron who is worth $440 million, gives back to his community and is the best baller on the planet. @realDonaldTrump got $1M from his daddy, had numerous casinos and other business fail and isn’t the best on the planet at anything. https://t.co/PSwM5N17wQ

This is apparently what the President of the United States feels the need to share with the world at what should be long past his bedtime? It’s a disgrace. It’s racist. And it’s the product of petty but dangerous hatreds. I repeat this is the PRESIDENT??!? https://t.co/MA8nZUxFc7