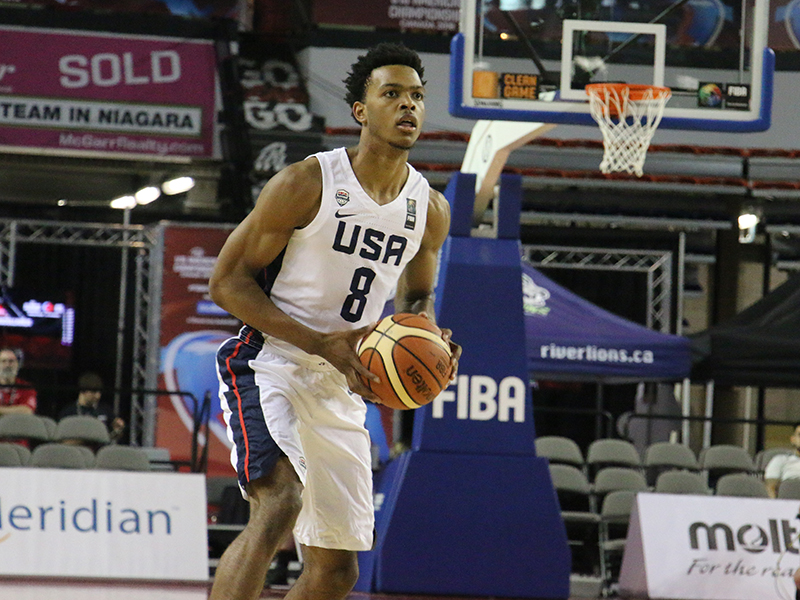 By ADAM ZAGORIA Josiah James, the 6-foot-5 point guard from Charleston (S.C.) Porter-Gaud School who won a gold medal with the USA at the FIBA Americas U18 Championship, will visit Duke next month. “I’m setting up a lot of unofficial visits before I go on official visits to schools,” he told Rivals.com. “I’ll probably cut it down to five before I take official visits and that will probably be mid-August. I know I’ll be at Duke on Aug. 11 and 12.” James is down to Arizona, Clemson, Duke, Florida State, Kansas, Michigan State, South Carolina, Tennessee and Virginia. He broke down several schools for Rivals. Duke: “It’s a really prestigious program, one of the best in the country every single year. It’d be an honor to play for a coach like Coach K.” Michigan State: “It’s basically the same thing. Coach Izzo is a Hall of Fame coach as well. I definitely want to play for a coach like him.” Clemson: “They are on the rise. Both in-state schools are, but Clemson just went to the Sweet 16. They want me to come in and be a leader, and I think I can do that for their program.” South Carolina: “They are doing really well. They were in the Final Four two years ago, and that made a big impact on the state. Staying in-state is always something that is in the back of my mind that I might look for.” Florida State: “I have really good relationship with Coach Stan Jones and Coach Leonard Hamilton. They’re just preaching they can improve my and they develop really good players because they’ve had a lot of guys like me. I think it’d be a great fit for me.” Among point guard targets, Duke is also involved for Cole Anthony, Joe Girard and Nico Mannion, among others. Wherever he goes, James plans to bring a diverse skill set. “Whatever they need me to do, I’m a versatile player,” he told ZAGSBLOG. “I can handle the ball, I can shoot the ball, I can play defense. I can guard 1 through 4 at the college llevel and that’s definitely what I’m working on day in and day out, but I’ll defiintely do whatever they need me to do.” Follow Adam Zagoria on Twitter And like ZAGS on Facebook