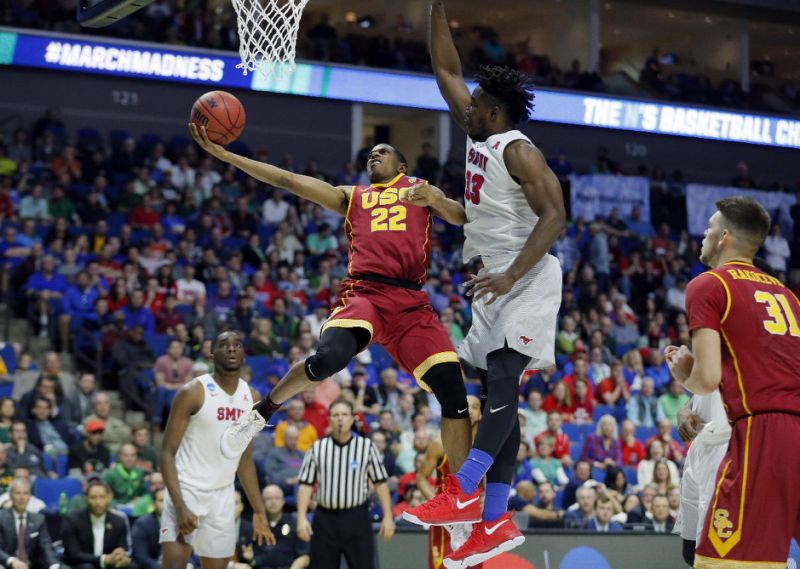 Auburn’s Austin Wiley and USC’s De’Anthony Melton were both ruled ineligible to play college basketball by the NCAA on Thursday. Since they weren’t ruled permanently ineligible, both players are also ineligible to compete in the NBA G League, ESPN reported. The 6-foot-4 Melton is projected as the No. 25 pick in the 2018 NBA Draft, per ESPN, while the 6-11 Wiley is projected at No. 35. “Auburn men’s basketball student-athlete Austin Wiley will not be eligible for competition until the 2018-19 season following an NCAA reinstatement decision,” the NCAA announced. “After an internal investigation, Auburn self-reported violations involving recruiting, extra benefits and agent-related activity.” Southern Cal issued a similar statement regarding Melton. “Based on information discovered through its internal investigation regarding the receipt of extra benefits, primarily to a close family friend of De’Anthony Melton, USC has concluded that De’Anthony will not compete with the USC men’s basketball team in the 2017-18 season,” the statement reads. “De’Anthony is a valued member of our program.  He will have options for his future at USC, including remaining in school on scholarship while continuing to work on his degree and practicing with the team, and potentially compete for the Trojans in the 2018-19 season.” Meantime, ESPN reported that Wiley and Melton, as well as former Western Kentucky big man Mitchell Robinson, cannot compete in the NBA G League this year, either.

What a missed opportunity by the G League. They could have had Mitchell Robinson, De’Anthony Melton and Austin Wiley competing in the G League Showcase. How many more NBA decision makers would this have attracted to Toronto? How much attention from fans & media did they miss on?

“We’re not looking to compete with college basketball for their players,” a G League source told ESPN. “The NBA, specifically NBA lawyers, are concerned about the optics of NCAA players being disgruntled with minutes or coaching decisions and leaving college with the hopes of joining the G League. This is a blanket rule unfortunately that applies to all players. Like all of our rules, we are open to revisiting them if needed, but at the moment any player that was enrolled in a college this season is ineligible to play in our League.” One NBA GM provided a counterpoint to ESPN. “Is it really the NBA’s place to tell players what they should or shouldn’t do with their lives before they enter the draft?” the GM asked. “Normal kids drop out of college every day for a variety of reasons, and we don’t put any restrictions on what they can do afterwards, as long as they are qualified. Brian Bowen and De’Anthony Melton didn’t do anything wrong and shouldn’t be punished because of the actions of their family or friends. “These guys are in limbo right now and should be allowed to play somewhere in the U.S. … I’m not even sure this would hold up in court, honestly, if someone challenged it. The sad part is that the NBA Players Association has no jurisdiction over these kids before they enter the NBA and has no say in the G League bylaws.” Photo: AP Follow Adam Zagoria on Twitter And Like ZAGS on Facebook