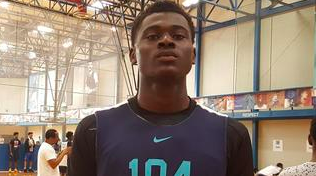 By SEAN BOCK Babatunde Akingbola, the 6-foot-10 power forward from Powder Springs (Ga.) McEachern, has committed to Auburn, he announced via his Twitter. A four-star recruit, Akingbola chose Auburn over Rutgers, NC State, and Georgia Tech among others. “I decided to go to Auburn because they’ve been great to me,” Akingbola told 247. “It’s a great school, academic wise and sports wise. It’s a great school and they have a great coaching staff. They’ve been recruiting me since my freshman year. They’ve been great to me.” Akingbola is the first pledge in the 2019 class for Bruce Pearl. “In many ways defensively,” Akingbola said of what he’ll bring to the program. “That’s what they know about me. I’m a shot blocker and do that great. So I think I can help with that, rebounding, blocking shots. But I think rebounding is the best thing for me.” According to 247Sports, Akingbola is the No. 25 player at his position in the 2019 class and the No. 8 prospect from the state of Georgia.   Photo: 247
Follow Sean on Twitter
Follow Adam Zagoria on Twitter
And Like ZAGS on Facebook