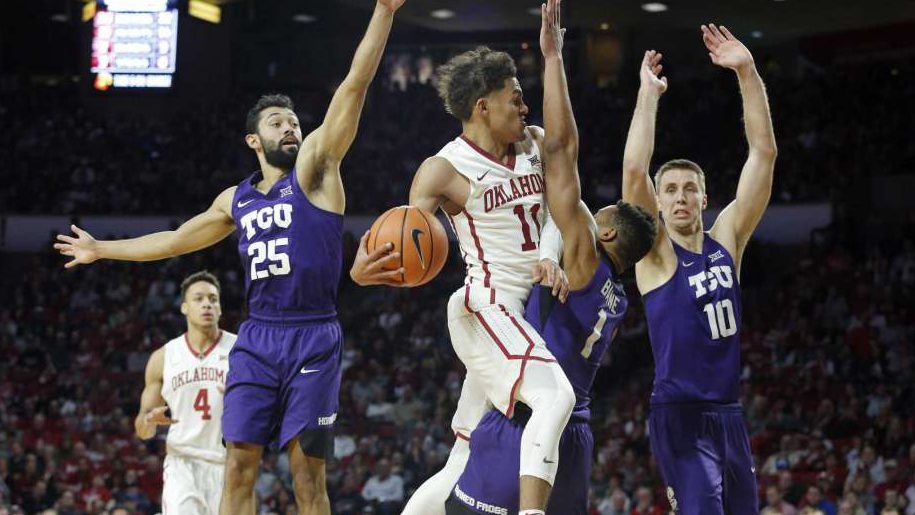 NORMAN, Okla. (AP) — Trae Young scored 29 of his 43 points after halftime, and No. 9 Oklahoma defeated No. 16 TCU 102-97 in overtime on Saturday. Young, the freshman who leads the nation in scoring and assists, also had 11 rebounds and seven assists. Brady Manek added 22 points for the Sooners (14-2, 4-1 Big 12), who made a school-record 19 3-pointers. It was Young’s second dominant performance against TCU this season. He had 39 points and 14 assists and made the game-winning free throws with 7 seconds left in a 90-89 win over the Horned Frogs on Dec. 30. Jaylen Fisher had a career-high 22 points and Vlad Brodziansky added 21 for TCU (13-4, 1-4), which lost its second overtime game of the week. TCU lost to Texas in double-overtime on Wednesday after Fisher missed what would have been the go-ahead layup in the closing seconds.

TCU’s losses are by a combined 11 points, and three have been in overtime. Oklahoma led 49-47 at halftime. Manek scored 18 points and Young had 14 points, six rebounds and four assists. Brodziansky led TCU with 14 points in the first half as the Horned Frogs shot 53 percent. A deep 3-pointer by Young helped push Oklahoma’s lead to 57-52, but Brodziansky’s putback jam tied it at 65. Kameron McGusty banked in a 3-pointer late in the shot clock to push Oklahoma’s lead back up to 70-65. TCU rallied, and back-to-back 3s by Brodziansky and Kouat Noi gave TCU a six-point lead with 5:26 remaining. Young scored 11 points in a 3-minute span to help the Sooners tie the game at 85. Young found Christian James for a 3-pointer with 6 seconds remaining that gave the Sooners an 89-87 lead. Fisher’s layup with 1.4 seconds left forced overtime. BIG PICTURE TCU: The Horned Frogs are likely out of the hunt for the Big 12 title, but the schedule eases up a bit, and they have a chance to get some wins by the end of January. Oklahoma: Young continues to make adjustments and dominate after halftime. It’s another quality win for the Sooners, who are in the race for the conference title and a No. 1 seed in the NCAA Tournament. UP NEXT TCU: Hosts Iowa State on Wednesday. Oklahoma: Plays at Kansas State on Tuesday. ___ Photo: AP
Follow Adam Zagoria on Twitter
And Like ZAGS on Facebook