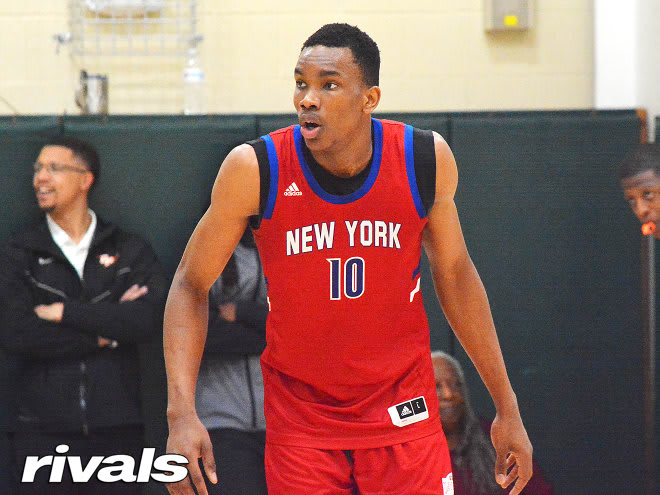 By ZACH SMART After showing out as a versatile defensive backbone at 7-feet during the recent Mayhem in Maryland event, Class of 2023 NY Jayhawks prospect Ugonna Kingsley Onyenso is hearing from a number of high major programs. Syracuse, Providence, UConn and Boston College have all been recruiting the Nigerian native at a consistent pace.  The big man attended games at Providence and UConn in February. LSU is working hard, Kentucky and Duke are involved and Kansas, Maryland and Florida offered the big man in the last week. UConn, of course, recently received a commitment from Hassan Diarra, a former Top-100 recruit and transfer via Texas A&M.  Diarra attended Putnam Science (CT), the national power where Onyenso will prolong his career as a highly acclaimed senior. He’s also a product of the Team New England Basketball Club. What differentiates Onyenso and makes him such a unique prospect? “Skill, hands, and motor,” explained NY Jayhawks coach Jay David, who has witnessed transcendent big’s recent, rapid evolution. When Onyenso first got to PSA, the team was already at 19-0 on the season. His presence and ability to steer drivers away from the paint, however, helped take them to a different level.  “What separates (Ugonna) is his work ethic and his will to want to be great,” explained PSA associate head coach Josh Scraba, who cited Florida, Maryland, and Syracuse as programs who have been in recent pursuit of Onyenso. “With this Jayhawks team he’s going to be truly a difference maker inside,” Scraba said. “Syracuse assistant Gerry McNamara has also done a commendable job recruiting Onyenso. Providence, UConn, and Boston College were the first to get involved with Onyenso when he arrived at the doorstep in Connecticut. “Hopefully some blue bloods get involved and I think that’s definitely the market for his game,” Scraba said.  Follow Zach Smart on Twitter Follow Adam Zagoria on Twitter Follow ZAGSBLOGHoops on Instagram And Like ZAGS on Facebook