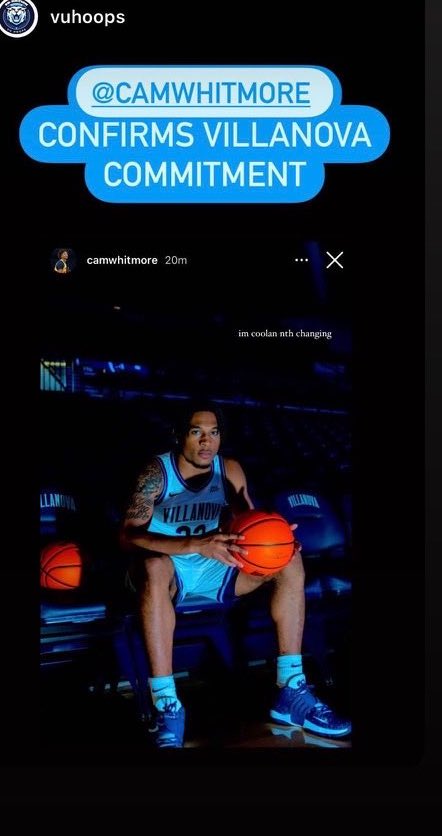 By ADAM ZAGORIA Five-star wing forward Cam Whitmore confirmed his commitment to Villanova and new head coach Kyle Neptune on Monday, while his fellow Class of 2022 pledge Brendan Hausen did the same on Tuesday. Ranked the No. 7 small forward in the Class of 2022 per 247Sports.com out of Archbishop Spalding (MD) and Team Melo, Whitmore initially committed to the Wildcats last October over Illinois and North Carolina. Whitmore was named Baltimore Catholic League Player of the Year in 2020-21 when he averaged 22.0 points and 11.7 rebounds a game. Last month, he went for 19 points,. 8 rebounds and 5 assists as the East won the McDonald’s All-America Game, 105-81, in Chicago. “Cam comes from a wonderful family that we have enjoyed getting to know,” retired Villanova coach Jay Wright said when Whitmore signed in November. “Cam really fits Villanova. On the court, he has the skills and talent to become a complete player who does everything well. We’re extremely excited to welcome Cam to the Villanova Basketball Family.” The 6-4 Hausen, a four-star shooting guard from Amarillo (TX) and the Team Griffin AAU Program, committed in September reaffirmed his pledge Tuesday after meeting with Neptune. “Brendan is a pure shooter, tough competitor, and proven winner,” said Wright. “As we got to know Brendan and his great family through the recruiting process, we saw a young man who brings all the qualities we value in a Villanova Basketball player. We’re fired up to have Brendan at Villanova.” The father of four-star point guard Mark Armstrong Jr. of St. Peter’s Prep (N.J.) and the NY Lightning confirmed his commitment to Villanova last week on NJ Advance Media. “Mark is part of a wonderful family that we’re happy to welcome to Villanova,” said Wright. “As a consummate point guard, Mark really understands how to run a team. He makes everyone on the team around him better. We believe he has what it takes to become a great Villanova guard.” Villanova is losing super-seniors Collin Gillespie and Jermaine Samuels, but is expected to return key players Justin Moore, who is recovering from a torn Achilles, Eric Dixon, Brandon Slater and Jordan Longino, among others, from a team that won the program’s fifth Big East Tournament title and reached its fourth Final Four under Wright, 60, who retired last Wednesday. This post was updated at 4 p.m. on April 27. Follow Adam Zagoria on Twitter Follow ZAGSBLOGHoops on Instagram And Like ZAGS on Facebook