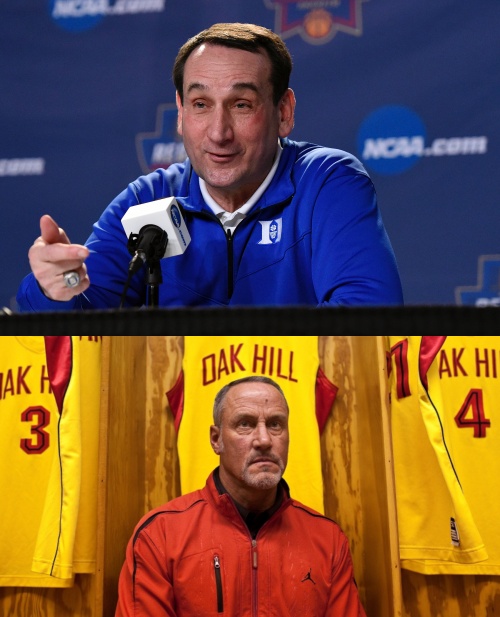 By JACOB POLACHECK When Saturday night rolls around, two coaching legends — Duke’s Mike Krzyzewski and Oak Hill Academy’s Steve Smith — will host the final home games in their illustrious careers as they head toward retirement following the season. While Coach K joked Thursday on “Pardon the Interruption” about not playing any golf upon retirement, Smith plans to play a lot of golf following this season. When Smith thinks back on his relationship with Coach K — who will face North Carolina on Saturday (6 p.m., ESPN) in his final game at Cameron Indoor Stadium — he remembers moments not on the links, but in the gym. “He’s not a golfer or anything, so it’s not like I play golf with him like some other guys,” Smith, 66, said in a phone interview Thursday ahead of his final home game against First Love Christian (PA) in Turner Gymnasium. “I’ve gotten to know him through basketball and recruiting our players.” Smith, who started as an assistant coach at Oak Hill in 1983 before becoming head coach in 1985, says it was in the fall of 1992 that Krzyzewski first recruited a player from Smith’s program when he looked to land a 6-foot-6 guard by the name of Jerry Stackhouse. “He visited Duke. He went to (North) Carolina,” Smith said. “I think that’s the first time I met Coach K. I’ve known him for 30 years. That was mostly, like I said, through basketball, obviously.” Throughout his 39 seasons at Oak Hill, Smith has had three alumni- – William Avery (1997), Nolan Smith (2007) and Quinn Cook (2011) — go onto play for Coach K at Duke. What else do those three players have in common? All three played in a national championship under Coach K. Avery played on the 1998-99 Duke team, falling to UConn in the national championship game. Meanwhile, Smith won a national championship with the Blue Devils in 2010 and Cook in 2015. “I’m just glad I had players that were good enough to play at Duke and be recruited by Duke,” Smith said. “I had the opportunity to get to know Coach K and follow those guys when they played at Duke. That was a thrill for me.” Nolan Smith, a current Duke assistant, has played a role in adding to that list, helping to recruit two current Oak Hill players — Christian Reeves and Caleb Foster — to the Duke program. “Duke is Duke. The ACC is the ACC,” Steve Smith said. “They’d obviously like to play for Coach K. He coached there for over 40 years, but it just had to be the time he retired. They were recruited by coach [Jon] Scheyer, so that’s the guy they know they’re going to play for. They’re going to play for Duke and like I said, Duke is Duke. And I think Duke is going to continue to be good. They’ll just be playing for the next coach in the next era, not Coach K.” Reeves, a 7-foot-1 center in the class of 2022, is planning to redshirt the 2022-23 season at Duke before playing in 2023-24. “He’s really improved,” Smith said. “I think if they wanted to play him next year they could. I think they’ve got some other bigs coming in, some other bigs in the program, so I think he’s planning on redshirting a week ago. That’s the last he told me a week ago.” Foster, a 6-5 point guard in the Class of 2023, has tossed around the idea of reclassifying to the class of 2022, Smith says. “He could graduate this summer from high school if he wanted to. He could go next year,” he said. “He could come back to Oak Hill and go the following year. I think he’s leaning to that, but I think they’re waiting to see who goes, who stays. Will they need a guard? If they want Caleb to come in, he could play the one or the two, but he’s mainly a point. He hasn’t made a decision on that yet either. “A lot of kids have been reclassifying in the last year or two. It seems to be more popular to do that now if they have credits,” Smith said. “He does. He’s a good student and he can graduate if he takes senior English and I think one other class. That’s possible, but like I said, I think he’s leaning more towards another year of high school. Who knows?” All in all, Smith has coached 29 NBA Draft picks and hundreds of Division 1 players, including a handful to don the Duke navy blue.  “I’ve been lucky and blessed to have kids go to Duke,” Smith said. “Some coaches don’t have any kids in high school that go to any Division 1 school. I’ve had multiple kids go there. It’s something we’ve been proud of.” And on Saturday, Smith will coach his final home game at Oak Hill in the afternoon before heading home to watch another coaching legend do the same. “Our game is at 2:30, so I’m going to go home and watch Duke play at 6:00,” Smith said. Follow Jacob Polacheck on Twitter Follow Adam Zagoria on Twitter Follow ZAGSBLOGHoops on Instagram And Like ZAGS on Facebook