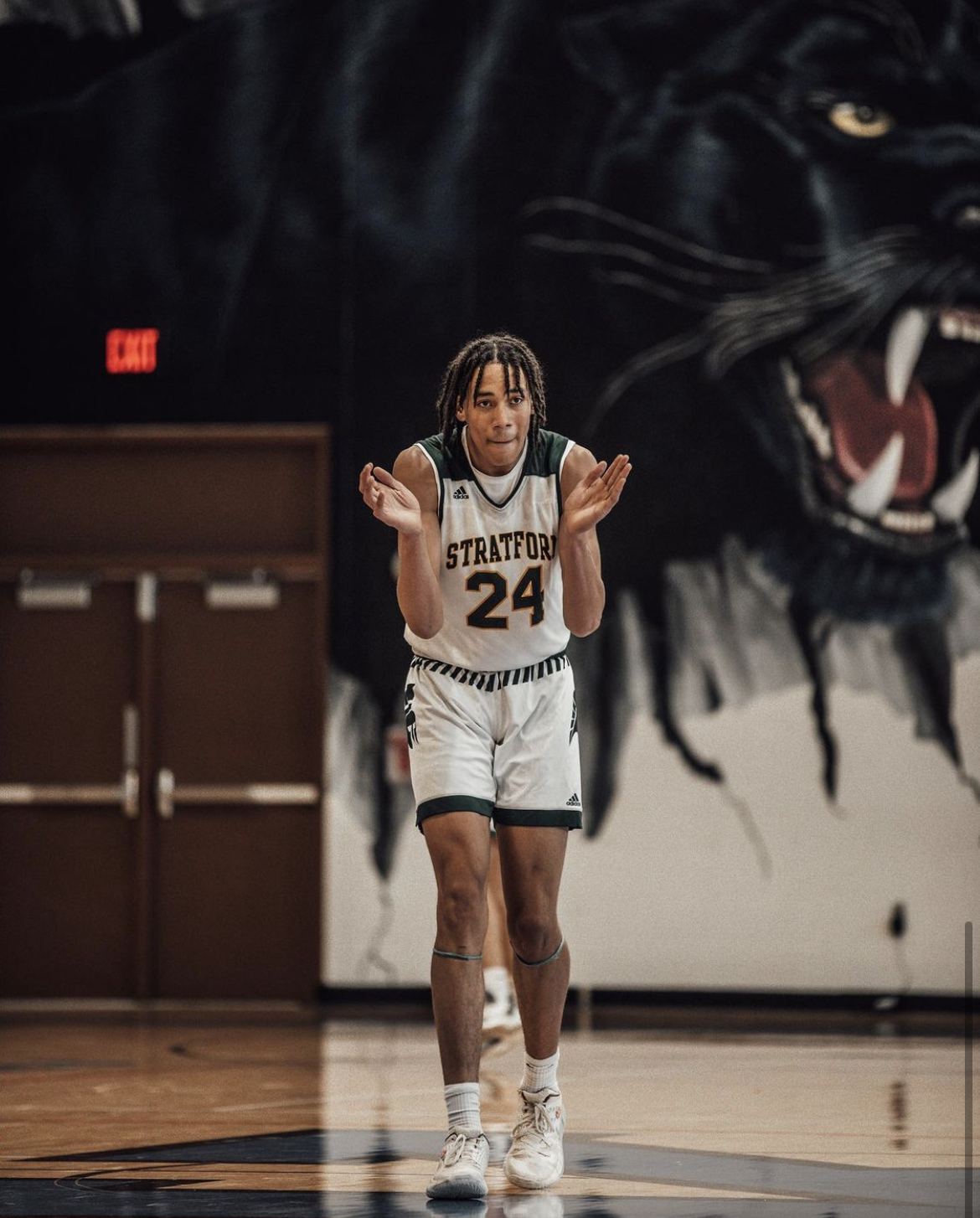 By TOBIAS BASS Out of all the stock risers in the state of Texas, Keanu Dawes has arguably had the biggest leap. About nine months ago, he was a prospect with a lot of untapped potential that didn’t have any division 1 offers. His success has undoubtedly motivated kids all over the Houston area.  “I would tell them just to keep working on their game and stay focused on what their goals are because, at some point, everything will work out,” he said. The 6-foot-8, 190 pound forward from Stratford (TX) models his game after two current NBA All-Stars. “I try and model my game after Paul George and Kevin Durant because they are both bigger people who can handle the ball and score with ease,” he said. Dawes just received an offer from Stanford on February 25th and has a long list of schools that call him weekly (Utah, Oklahoma, Ohio State, and Oregon).  Before he makes his college decision down the line, he wants a coach/program that will be honest with him in the recruiting process and push him to be the best player he can be. He breaks down each school: Houston: “I like that they are honest, and they tell me what they want me to work on more and that they have a plan for me.” Rice: “Both the head coach (Scott Pera) and assistants talk to me almost every day, so I have a really good relationship with them.” Sam Houston State: “They were my first offer, so that will always mean a lot to me, but I like the overall feel of the whole staff and campus.” Tennessee: “Assistant coach Rod Clark and I have a good relationship, and I really like them because they see a young Kevin Durant in me, and that’s who I try to model my game after.” Texas A&M: “They were the first High Major to offer, but I talk to assistant coach Lyle Wolf a lot, and they have stopped by the school a lot to see me as well.” Texas: I really like Texas, they offered me when I went on a visit down there, I was around head coach Chris Beard and the rest of the coaching staff basically the whole time I was there and I have been back up to many games since it’s really close to home Stanford: I really like Stanford because of how they are academic wise and they are also are a great basketball program so it is the best of both worlds, I am in contact with head coach Jerod Haase and the rest of the staff a lot  Texas Tech: I talk to assistant coach Barret Peery basically every day so I feel like I have a really strong relationship with them in the short amount of time that I’ve been in contact with them TCU: They have been at my school to see me a lot, I talk to assistant coach Duane Broussard a lot not even just basketball-related just life in general As for visits, he isn’t deadset on any at the moment but plans on taking an unofficial to Texas A&M in the near future and will start taking officials after AAU ball is over with.  College coaches have raved about his versatility on both ends, as he can play 1-4 and defend multiple positions. This will be a big summer for him, as he should get more attention nationally. ” I think my versatility will translate best at the next level because I can really play 1-4 so I can play with many different groups, and that will also help me stay on the floor for a longer period of time,” Dawes said. “My success has been good this year, but it’s mostly due to my trainers, coaches, and teammates, as they have helped me and put me in situations where I can be seen and be successful.”  With his final AAU season just a few months away, Dawes wants to showcase his skills against the nation’s best and tells ZAGSBLOG why he chose to play for Texas Takeover this summer. “Last year was my first year playing on the EYBL circuit, so I got to see and play against the people who are considered the top players in the country, and I feel like I could really compete with those guys,” he said. “So I kept that mindset going into the school season, and when I actually got the opportunity to showcase what I can do, people are starting to see what I see as well. “I feel like Texas Takeover gave me the best opportunity to accomplish the thing that I wanted to accomplish in my last summer of AAU while also having fun.” Follow Tobias Bass on Twitter Follow Adam Zagoria on Twitter Follow ZAGSBLOGHoops on Instagram And Like ZAGS on Facebook