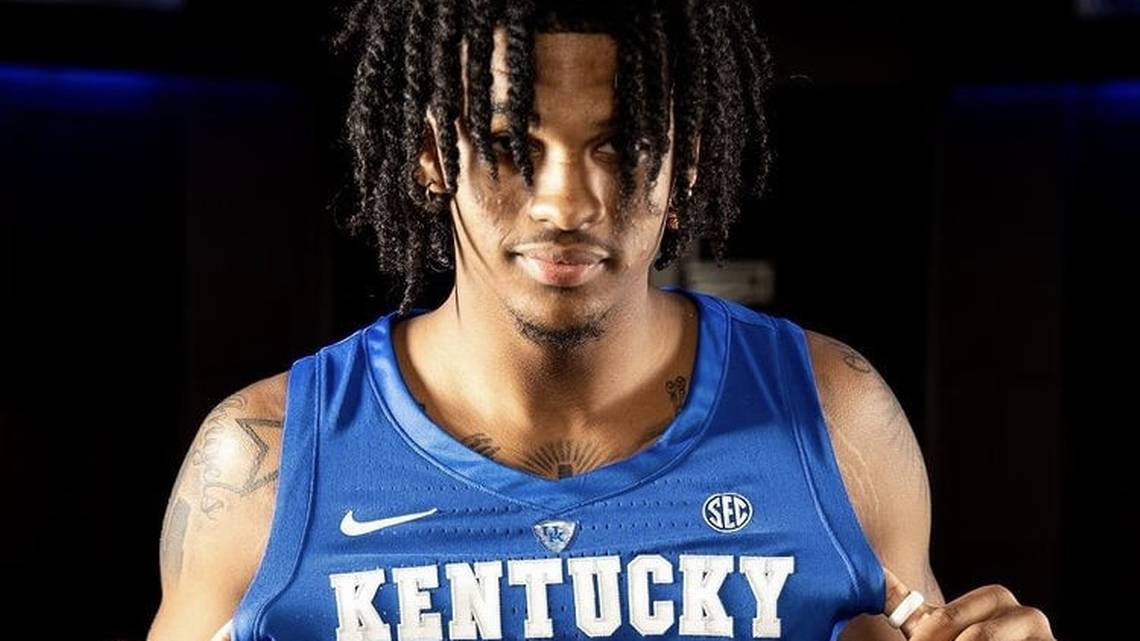 By ADAM ZAGORIA SPRINGFIELD, Mass. — Skyy Clark was just running up the court during practice with his MoKan Elite AAU team last July 3 when he tripped over his foot trying to get back into a play. It turned out that the 6-foot-3 guard who had committed to Kentucky the previous October and announced his transfer to prep powerhouse Montverde (FL) Academy last May — had suffered a torn ACL. He ended up not only missing the prestigious Nike Peach Jam in late July but the entire rest of the summer and the start of his senior season. “Nobody was within six feet of him,” his father, Kenny Clark, said Saturday at the Hoophall Classic. Six months after the injury, Clark is back on the court with Montverde, looking poised and confident as he runs the point for coach Kevin Boyle’s team. In his fifth game back Saturday, he had 11 points, 2 assists and 4 turnovers in 23 minutes in an 84-65 win over against DeMatha Catholic (MD). “Rehab is a long process, six months,” Clark said. “When you look back at it, it goes by quick but going through the process it’s a long one. And just gaining confidence in your knee and your game and everything again, so that’s probably the hardest part.” He added: “Not many people return this fast, so it’s just a day-by-day thing. Every game I’ve gotten better.” Clark had surgery July 23 and his father credited Dr. Christian Anderson of the Tennessee Orthopedic Alliance in Nashville with the seamless surgery. “If you have an ACL, go see Dr. Anderson because he’s like a miracle worker,” his father said. Clark underwent rehab in Nashville and then at Montverde once he got to school. “Yeah, me and my guy Jason [Torres], one of the trainers at Montverde, he was with me the entire time, every day,” Clark said. “Every day we were in there, about 2-3 hours.” Clark wasn’t certain if he would return this season but when he began to dunk “a week before the four-month mark,” that’s when he and Torres realized “I could play this season.” “We were at lunch shooting around and I was just feeling I had a little jump that day and so I just went up and cocked it back and I ran and got my trainer,” he said. Kenny Clark said both Boyle and Kentucky coach John Calipari were supportive throughout the process, and nobody pushed Clark to come back before he was ready. “Coach Boyle has been amazing because they have done everything to protect him whether it be two months ago, making sure he’s getting the right treatment or when he came back to practice making sure players are staying away from him,” Kenny said. As for Calipari, he was also supportive. “He said take it day-by-day,” Skyy said. “He said don’t worry about offense, he said that’s going to come. He said just go out there and play hard and play defense and it’s going to come back. Coach Cal [and the Kentucky staff], they’ve all been super supportive.” He added that “knowing they’re behind me” gave him “more confidence to work hark” during the difficult rehab process. “Coach Cal didn’t care if he came back to play high school ball, he just wanted him to come to Kentucky healthy,” Kenny added. “Once he saw the videos and everything, he just couldn’t believe it. He told him to go do it.” Clark was motivated to get back and play with his teammates — including Dariq Whitehead (Duke), Jalen Hood-Schifino (Indiana), Malik Reneau (Florida) — as they challenge for Boyle’s sixth GEICO High School National championship. “They told me not to rush it, they told me to get back when I’m ready so I just got out there when I felt I was,” Clark said. Clark has been watching Kentucky play and saw them “whoop up on Tennessee” Saturday when TyTy Washington went for 28 points in the 107-79 blowout. “I’ve been studying even more and I’m excited to get out there,” Clark said of Kentucky. “My guy TyTy he been handling business.” Asked what he sees his role at Kentucky being, Clark said: “Just really doing what I’m doing now and that’s distributing the ball, passing, getting my teammates where they need to be, being an Energizer bunny, getting rebounds, doing whatever I can to win.” Washington may well be gone to the NBA Draft by the time Clark arrives, but Boyle, who has coached seven top-3 NBA picks since 2011 — including No. 1s Kyrie Irving, Ben Simmons and Cade Cunningham — believes Clark can play a Chris Paul-type role going forward. “He’s a really good player who’s just starting to scratch the surface because he’s been out six months,” Boyle said. “He’s a heady player, he had a couple turnovers that he normally doesn’t have. Some of that is fatigue, some of that is a little rust. “But he’s such a good leader and has such a good understanding of the game, he’s a guy that makes everybody better. He’s gotta understand that he can be like a Chris Paul that understands the game. He’s a good athlete, but he’s not a great athlete, so he’s gotta be an incredibly heady player that makes everybody better, that makes open shots, that runs the team. Chris Paul is one of the best players in the NBA. That’s what we’re trying to get him to understand, like that’s a great guy for you to be like.” Kentucky and its fans would take that in a heartbeat. Follow Adam Zagoria on Twitter Follow ZAGSBLOGHoops on Instagram And Like ZAGS on Facebook

Shaedon Sharpe practices with Kentucky ahead of Tennessee game