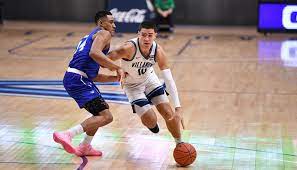 By JACOB POLACHECK Syracuse has added its second Big East transfer this week as Villanova transfer forward Cole Swider announced his commitment to the Orange on Saturday via Twitter. The 6-foot-9, 225-pound forward out of Portsmouth, R.I., averaged 5.7 points, 2.8 rebounds, 1.1 assists and 0.5 steals per game during the 2020-21 season. He appeared in 25 games and averaged 18.9 minutes per game. With several players on the way out, Syracuse has looked to the transfer portal to fill its 2021-22 roster, also picking a commitment from Marquette transfer guard Symir Torrence on Wednesday. Syracuse guard Kadary Richmond, forward Robert Braswell and big man John Bol Ajak are all transferring out of the program. Photo: Villanova Athletics Follow Jacob Polacheck on Twitter Follow Adam Zagoria on Twitter Follow ZAGSBLOGHoops on Instagram And Like ZAGS on Facebook