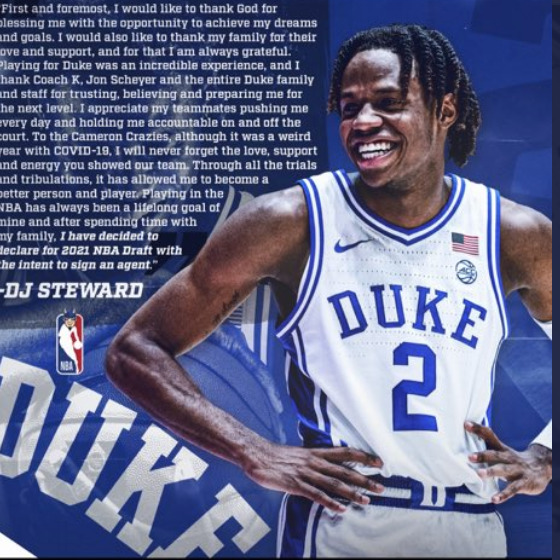 Duke freshman guard DJ Steward has announced he will enter his name in the 2021 NBA Draft. He is ranked the No. 63 Best Available Player, per ESPN.com. An ACC All-Freshman selection and the conference’s leading freshman scorer, Steward averaged 13.0 points to become the seventh Blue Devil in the last eight seasons to lead all ACC freshmen in points per game. The dynamic scoring guard from Chicago started 22 games, shot .426 from the field, .341 from three-point range, .811 at the free throw line and scored in double figures 17 times. Steward finished the year with at least one three-pointer in each of his final 21 games. “First and foremost, I would like to thank God for blessing me with the opportunity to achieve my dreams and goals,” said Steward. “And I would also like to thank my family for their love and support, and for that I am always grateful. Playing for Duke was an incredible experience, and I thank Coach K, Jon Scheyer and the entire Duke family and staff for trusting, believing and preparing me for the next level. I appreciate my teammates pushing me every day and holding me accountable on and off the court. To the Cameron Crazies, although it was a weird year with COVID-19, I will never forget the love, support and energy you showed our team. Through all the trials and tribulations, it has allowed me to become a better person and player. Playing in the NBA has always been a lifelong goal of mine and after spending time with my family, I have decided to declare for 2021 NBA Draft with the intent to sign an agent.” Steward was twice named ACC Freshman of the Week – first on Dec. 21, coming off a 16-point, five-rebound effort at Notre Dame, and again on Jan. 11 after averaging 17.5 points and 7.0 boards in wins over Boston College and Wake Forest. He earned ACC All-Freshman Team status, marking the 10th consecutive year Duke has boasted an All-Freshman selection. He was Duke’s second leading scorer, while averaging 3.9 rebounds and 2.4 assists per game. “DJ had an incredible freshman season and he has so much more potential,” said head coach Mike Krzyzewski. “He is going to keep getting better and better and I can’t wait to watch his professional career develop. DJ will be an asset to any NBA team with an attitude and energy that make him very easy and enjoyable to coach. He came in every day with a smile on his face and he represented himself, his family and our program so well. I loved coaching DJ and wish him our best as he prepares for the next step in his career.” The Blue Devils have had at least one player selected in 33 of 40 NBA Drafts under Krzyzewski. Coach K has tutored a total of 67 draft picks since taking over the Duke program, including a Draft-record 41 first-round selections. Release via Duke Follow Adam Zagoria on Twitter Follow ZAGSBLOGHoops on Instagram And Like ZAGS on Facebook