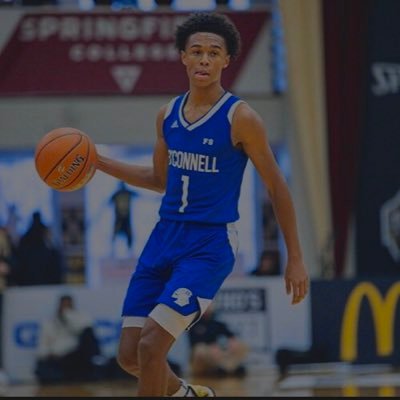 By ADAM ZAGORIA & ETHAN FULLER Maryland has its point guard of the future. The Terps on Sunday landed a commitment from Paul Lewis, the 6-foot-3 Class of 2022 point guard from Bishop O’Connell (VA and the DC Premier AAU club. Ranked the No. 19 point guard in the 247Sports.com Composite rankings in 2022, he also considered Georgetown, ECU and Old Dominion. Lewis averaged 15.7 points, 3.9 rebounds and 3.8 assists as a sophomore. “Maryland’s been my dream school,” he said by phone. “But the things they were saying, the way they were talking about how they would use me if I were to go there, things like that; that’s the main thing that stood out to me. And then once I announced that I was gonna be committing — not even to Maryland, just committing — the Maryland fans, out of all the schools, they were showing the most love. Commenting turtles and stuff. That just made me more confident about my decision.”

Asked what it mean to choose his “dream school,” he added: “Obviously, it’s the hometown school, and being a high-major school and things like that. Since I was 7 or 8, it’s really been a dream school. And seeing Melo Trimble go to Maryland from O’Connell at the same time my brother [Matt Lewis] was at O’Connell… that made it even more of a dream to go there.” The Terps have pitched Lewis on being similar to both Trimble and former Maryland point guard Anthony Cowan. “His name came up a whole lot. Him and Anthony Cowan’s — they said I have the potential to be like them,” he said. “I think them mentioning those guys really helped sell it. If they’re comparing me to people like that, that really means they think I’m a good player.” Maryland has three commits in 2021 in Julian Reese, Ike Cornish and James Graham but Lewis is their first in 2022. Lewis said he wanted to get the decision over with as soon as Maryland offered June 15. “When I first got the offer, I’d already started talking to my parents about committing,” he said. “Honestly, I wanted to commit right after I got the offer. They were like, just wait; they had to talk some logic into me.” As for what they’re getting, his high school coach explained. “Paul is an elite shooter with incredible range and is a big time shot maker,” O’Connell coach Joe Wootten said. “He is fearless!! He is a an excellent point guard with quickness and a high IQ. Above all he is a great competitor who values winning!” Lewis added: “I’m a three-level scorer, a scoring point guard. I can score and get my teammates involved. I play hard, compete hard, I want to win every game. The one thing I do need to improve on is my upper-body strength.” This post has been updated. Follow Adam Zagoria on Twitter Follow ZAGSBLOGHoops on Instagram And Like ZAGS on Facebook