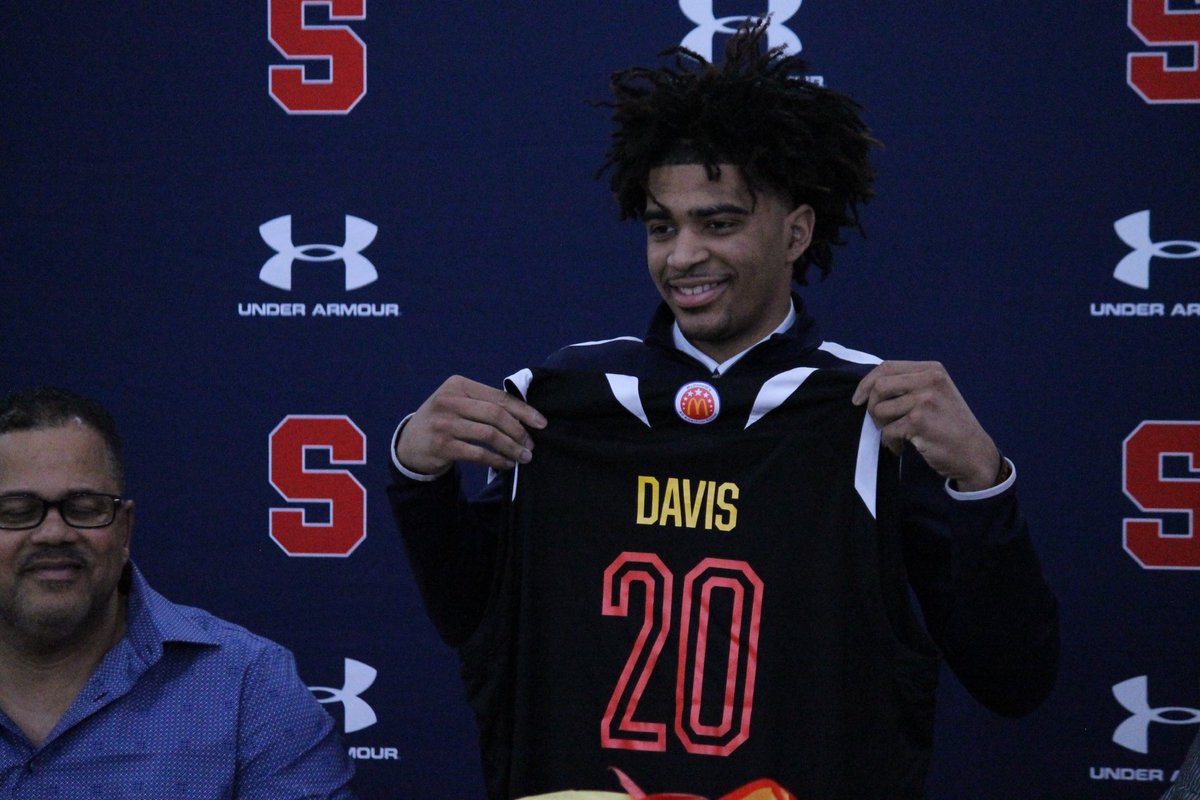 By ADAM ZAGORIA R.J. Davis got a double-dip of good news on Thursday. The 6-foot-1 North Carolina signee from Archbishop Stepinac received his official McDonald’s All-American Game jersey and was also given a day in his honor by White Plains Mayor Thomas Roach, who proclaimed Thursday “R.J. Davis Day.” Davis knew the McDonald’s jersey was coming but wasn’t aware of the day in his honor until he opened an envelope at his McDonald’s press conference. “It was a proclamation granted to me for R.J. Davis Day, — Thursday, February 13th, 2020,” he said. “That was special to me, it was crazy. It’s definitely something that you look back on and say wow.” These are big times for Davis. North Carolina head coach Roy Williams and assistant Hubert Davis will be in attendance Friday night for Davis’ Senior Night at Stepinac.

The City of White Plains, NY proclaimed today R.J. Davis Day after the @UNC_Basketball commit received his @McDAAG award at ⁦@step_basketball⁩ . So cool for ⁦@ariidavis_⁩ pic.twitter.com/sdXpIrMViH

Davis, who earlier this season became Westchester County’s all-time leading scorer, is one of four North Carolina commits set to play in the McDonald’s All-American Game on April 1 in Houston. Walker Kessler, Caleb Love and Day’Ron Sharpe were all selected. Davis said he’s heard congratulations from coach Roy Williams and the staff. “They congratulated not only me, but the rest of the teammates for making the game,” Davis said. “They’re happy for me and they can’t wait for us to come into Carolina, but still to finish out the year strong and continue to win.”

The quartet stays in touch via a group chat — along with commit Donovan “Puff” Johnson — and talks about their goals for helping to turn the Tar Heels around next season. North Carolina is currently 10-14 and in last place in the ACC at 3-10. “Me, Puff, Caleb, Walker, Day’Ron created a group chat,” Davis said. “It’s just all positive things. People asking questions about each other and remaining positive and humble through the downfalls of Carolina right now. We’re all just excited to play next year, and we’re rooting for each other to finish out this year for high school.” Davis suffered through UNC”s overtime loss to Duke on Saturday night in which Wendell Moore’s tip-in at the buzzer proved the difference in a 98–96 Blue Devils win. “Yeah, it was a wild game and I was tuned in on the edge of my seat watching the game play-by-play from first half to second half,” Davis said. “It was a great game to watch, devastating, it kind of hurt me a little bit. It came down to the rebounds and free throws. It was a great game overall, though. I’m proud of the effort though.” Davis said North Carolina is also trying to add Sierra Canyon (CA) forward Ziare Williams, a fellow McDonald’s All-American who is considering six schools, including North Carolina, Arizona, USC, UCLA Oregon and Stanford. “I haven’t talked to him, but I think he’s one of our targets. We need another wing,” Davis said. Whether or not the Tar Heels add Williams, Stepinac coach Pat Massaroni said the team is adding a group of winners who will help beginning next season. “Obviously, this has been a really challenging situation for [North Carolina] this year,” he said. “They’ve gone through some downs that usually they don’t do at North Carolina but I think this group coming in will bring them back to where they need to be. “Roy isn’t a Hall of Famer without facing a little bit of adversity so they’re going to figure it out and that’s what they say to us and we say to them all the time. With four McDonald’s All-Americans going to North Carolina, and R.J. to be a part of that, it’s great for him and for the program.” This story has been updated. Follow Adam Zagoria on Twitter And Like ZAGS on Facebook