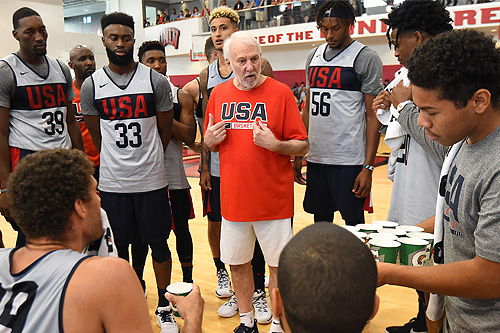 Following four days of training and Friday night’s USA Blue-USA White intrasquad exhibition game in Las Vegas, USA Basketball announced 17 finalists for the 2019 USA Basketball Men’s World Cup Team. The 17 include 13 athletes from the USA National Team roster and four players from the USA Select Team. Finalists include 2016 Olympic gold medalist Harrison Barnes (Sacramento Kings); Marvin Bagley III (Sacramento Kings); Jaylen Brown (Boston Celtics); De’Aaron Fox  (Sacramento Kings); Joe Harris (Brooklyn Nets); Kyle Kuzma (Los Angeles Lakers); Brook Lopez (Milwaukee Bucks); Kyle Lowry (Toronto Raptors);  Khris Middleton  (Milwaukee Bucks); Donovan Mitchell (Utah Jazz); 2014 World Cup gold medalist Mason Plumlee (Denver Nuggets); Marcus Smart (Boston Celtics); Jayson Tatum (Boston Celtics); P.J. Tucker (Houston Rockets); Myles Turner (Indiana Pacers);  Kemba Walker (Boston Celtics); and Derrick White (San Antonio Spurs). “We’re bringing a couple of young players from the Select Team so we’re going to be patient with the rest of the squad because we have plenty of time, we have two weeks to decide who will be the final 12,” said  Jerry Colangelo, USA Men’s National Team managing director.  “Forty-eight hours before Game 1 in China is when we have to submit a roster so we want to make sure everyone gets a real shot.  “There’s some things we like about every one of the players but how do we come to 12? We don’t have to make the decision now and we want to give everyone a real shot.” The USA National Team coaching staff features USA and San Antonio Spurs head coach  Gregg Popovich. Serving as USA assistant coaches are Golden State Warriors head coach Steve Kerr, Atlanta Hawks head coach Lloyd Pierce and Villanova University head coach Jay Wright.  Following a short break, the USA finalists will reassemble in Los Angeles to train Aug. 13-15 and play an exhibition contest versus FIBA’s No. 2 world ranked team, Spain, at the Honda Center in Anaheim on Aug. 16 (7 p.m. PDT). The American squad will continue its World Cup preparations Aug. 19-24 in Melbourne, Australia, and play a pair of exhibition games versus Australia on Aug. 22 and Aug. 24 at Marvel Stadium. The USA will complete its pre-World Cup tour Aug. 25-28 in Sydney, Australia. Slated to conduct training Aug. 25, 27 and 28, the U.S. will close out its exhibition tour on Aug. 26 facing Canada at Qudos Bank Arena. For game ticket information visit usab.com/tickets. The 32-team 2019 FIBA Basketball World Cup competition will be held Aug. 31-Sept. 15 in China. The United States, two-time defending World Cup champion and FIBA’s No. 1 world ranked team, was drawn into Group E and will play its first-round games in Shanghai. The USA will play Czech Republic on Sept. 1, Turkey on Sept. 3 and Japan on Sept. 5. Following competition of the round-robin first round games, the top two finishing teams from each group will qualify for the second round, while the bottom two teams from each group will play the classification round for places 17-32. Second round games are scheduled to be held Sept. 6-9 and the results of the three games from the first round carry over to the second-round standings. The second round will feature four groups – Group I will consist of A1, A2, B1 and B2; Group J will feature C1, C2, D1 and D2; Group K will consist of E1, E2, F1 and F2; and Group L will include G1, G2, H1 and H2. Second round play will be held in Foshan, Nanjing, Shenzhen and Wuhan. The top two finishing teams from each second-round group will qualify for the quarterfinals, and the bottom two teams from each second-round group are eliminated and ranked in places 9-16 according to the Official Basketball Rules. The quarterfinals action will be held in Dongguan and Shanghai on Sept. 10-11. Semifinals and the gold and bronze medal game are slated to be held in Beijing on Sept. 13 and Sept. 15, respectively. The USA men have participated in 17 FIBA World Cups and have collected 12 medals – five gold medals (1954, 1986, 1994, 2010 and 2014), three silver medals (1950, 1959 and 1982) and four bronze medals (1974, 1990, 1998 and 2006). USA Men’s World Cup teams own an overall record of 123-27. the FIBA Basketball World Cup 2019 will qualify seven nations Tokyo 2020 Olympic Games. The top two finishing teams in the World Cup from the Americas and Europe zones will earn qualifying places 2020 Olympics, as will the top Africa, Asia Oceania. Additionally, Olympic host qualified, and the final four nations will qualify FIBA Olympic Qualifying Tournaments that will be held in 2020 of the Olympics.  (Via USA Basketball) Follow Adam Zagoria on Twitter And Like ZAGS on Facebook