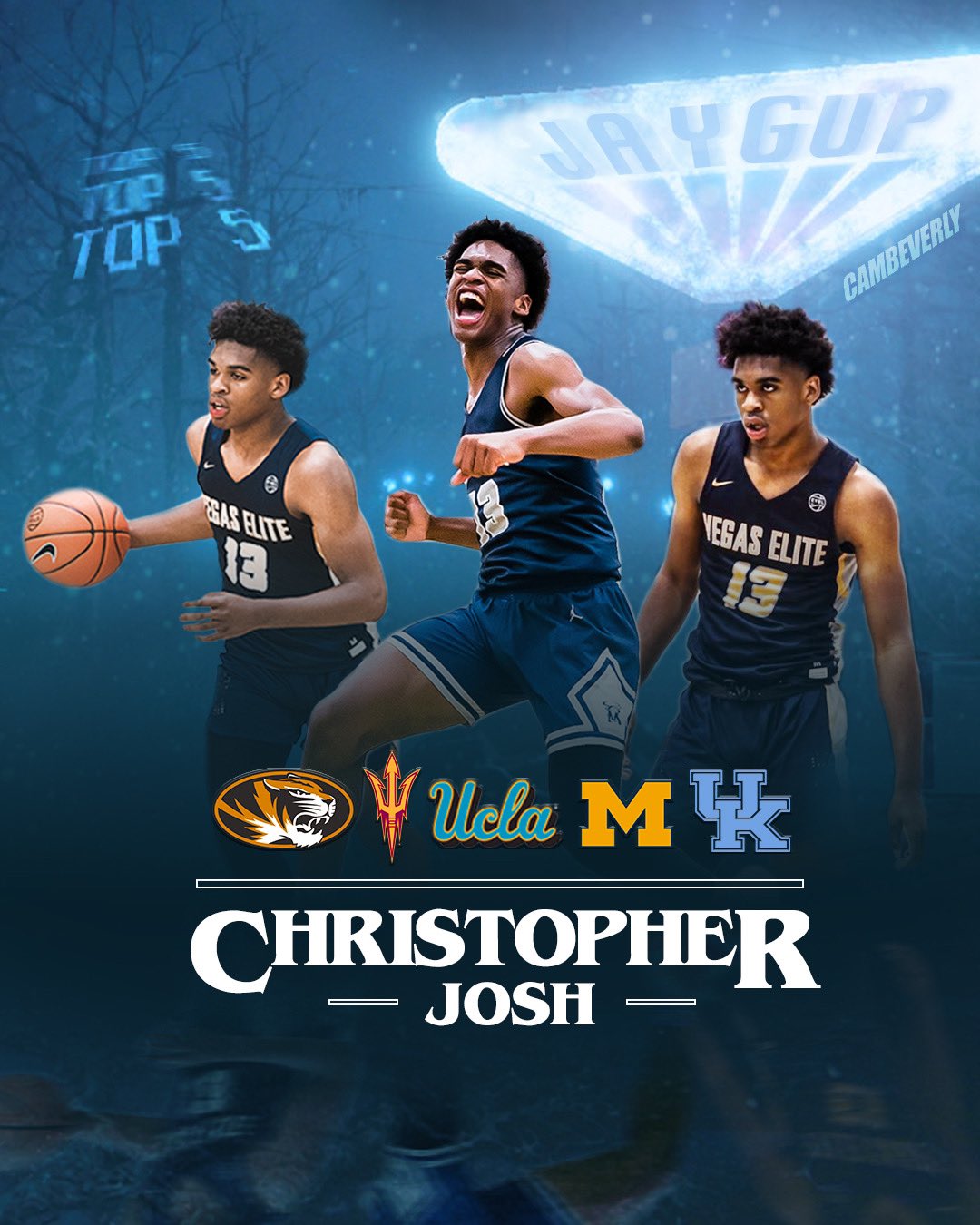 By ADAM ZAGORIA Josh Christopher named his top five schools. Christopher is down to Arizona State, Kentucky, Michigan, Missouri UCLA. The 6-foot-5 Christopher out of Mayfair (CA) and the Las Vegas Elite is ranked No. 10 by ESPN.com in the Class of 2020. “The hardest teams that are probably on me right now are Michigan, Kentucky, Arizona State with my brother being there, Missouri with my uncle being a coach there, a lot of the Pac-12 schools, UCLA with Shareef [O’Neal] being there,” he told Adam Finkelstein at Peach Jam.

Boom! Top 5. Early bday gifts for everybody! God is Good! Thank you for everyone that helped through this process! pic.twitter.com/rbhtfpu3Vd

He broke down several options with me at Peach Jam: Arizona State: “I talk to coach [Rashon] Burno all the time. I’m really cool with him, I built a relationship with him. Of course, my brother [Caleb Christopher] being there, that could play a factor in my recruitment, of course. the end of the day, that’s my brother’s future. And he did what for him going to Arizona State, I gotta do what’s best for me . So if Arizona State is the right place for or Arizona Tucson is the right place, or wherever, I can go to Alaska and play basketball, I’m going to be the best Josh Christopher I can be.” Kentucky: “I mean, shoot it’s Kentucky, it’s Calipari, so I think any player that’s in high school appreciates what Calipari brings to the table, so of course myself being a kid who’s always watched Kentucky and watched the guys like Anthony Davis and John Wall, of you appreciate that and take it into consideration.” He added: “I appreciate Calipari and company, coach [Kenny] Payne and coach [Joel] Justus. I appreciate the love they’re showing right now. I’ve worn and stuff like that since I was in elementary school and school so [with my] recruitment I have to calm down with clothing I put on. But I’m a fan of Kentucky so we’ll see what happens with my decision for college.” UCLA: “That would be crazy to watch ‘Reef [Shareef O’Neal] play. [Their pitch] is to get the opportunity to play with Shareef, stay home, be a neighborhood hero in Southern California. Playing with Shareef, that would be pretty cool. UCLA is like 30 minutes from me.” Michigan: “[Juwan Howard] wants me the best me that I can be. Of course, he understands that I want it to the NBA. He emphasized that he wants me to be in his go to the NBA from there. So however long that takes, he said. If I’m there for a year or two years or up to four years, however long I need to prepare myself for the NBA. And just . That was his big thing with me, too. Follow Adam Zagoria on Twitter And Like ZAGS on Facebook