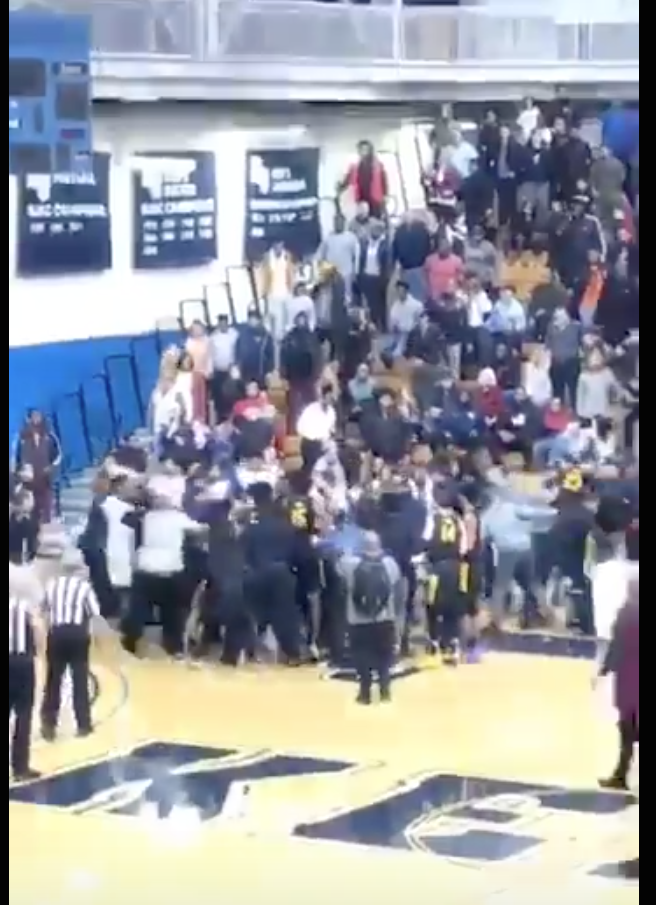 By ADAM ZAGORIA The game between national power Montverde Academy (FL) and Roselle (N.J.) Catholic at the Metro Classic on Saturday night ended in a brawl. Montverde, No. 4 in the USA Today poll, was playing the second of back-to-back nights at Kean University in the home state of coach Kevin Boyle against No. 11 Roselle Catholic. Montverde won the game 65-41 in a blowout with the brawl occuring near the end. It was Montverde’s last game for about two months before the GEICO High School Nationals in April in New York City. “After about 20 minutes of cops on court and trying to sort stuff out Montverde brought out five [reserves] and they resumed the game with just Roselle Catholic holding the ball until the clock ran out,” one person at the game said. Reached by phone late Saturday night, Boyle and RC coach Dave Boff both declined to comment. RC is still expected to play its game Sunday game against American History at the Metro Classic, a source said.

It definitely appears that Balsa Koprivica pushed Josh Pierre-Louis into the @rc_basketball bench and was then greeted by some of Josh’s teammates when punches began to fly pic.twitter.com/xlXxtsYzt5

Here’s the start of the brawl with the announcers saying ‘Koprivica’s in the middle of it’ pic.twitter.com/1YkwUK4dJZ

The altercation began when Florida State-bound big man Balsa Koprivica of Montverde and UNLV-bound guard Josh Pierre-Louis of RC were competing for a loose ball in front of RC’s bench. The 7-foot-1 Koprivica appeared to be pulled toward the RC bench by Pierre-Louis and then responded by tossing the 6-2 Pierre-Louis into the RC bench. From there, RC’s Kahlil Whitney and Richie Greaves appeared to run at Koprivica to defend their teammate and the three players began pushing and shoving. From there the melee escalated with onlookers and security rushing toward the RC bench. “We got something going on here, we got a brawl here,” one of the Facebook Live announcers says. “Koprivica’s in the middle of it….This game should not continue from this point. The referees should make a sensible decision and end this game before things get out of hand.” The game featured two McDonald’s All-Americans in Kentucky-bound Whitney of RC and uncommitted senior Precious Achiuwa of Montverde. North Carolina coach Roy Williams and assistant Hubert Davis had been at the game for Achiuwa, but left shortly before the brawl.

Here are Roy and Hubert leaving just before the brawl via the Facebook feed pic.twitter.com/hyOERS5lF1

It remains to be seen if future suspensions are forthcoming. In New Jersey, any player ejected from a game must sit the following two games.