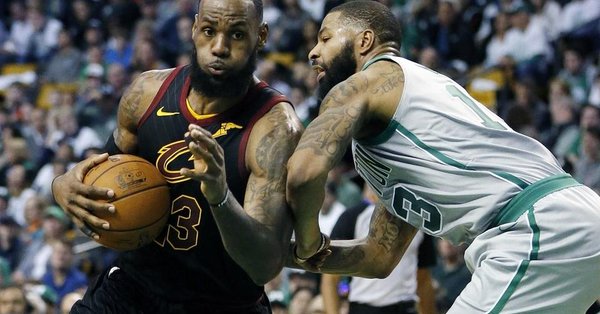 By ADAM ZAGORIA The NBA will feature Game 7’s in the Eastern and Western Conference Finals for the first time since 1979, when there was no three-point line and Jimmy Carter was in the White House. The Celtics will host the Cavaliers in a Game 7 on Sunday night (8:30, ESPN) after LeBron James forced a decisive game with his 46-point, 11-rebound, 9-assist performance in Game 6 Friday night in Cleveland. Boston is unbeaten at home this season, including its Game 7 win over the Milwaukee Bucks in the Eastern Conference semifinals. Meantime, James Harden and the Houston Rockets will host a Game 7 in the Western Conference Finals on Monday night (9 p.m, TNT) after the Golden State Warriors romped in a Game 6 win Saturday night thanks to Klay Thompson’s nine three-pointers and 35 points. Houston is seeking its first appearance in the NBA Finals since winning the second of back-to-back titles in 1995. The last time both Conferences featured a Game 7 was in ’79 when the Seattle Supersonics beat the Phoenix Suns and the Washington Bullets beat the San Antonio Spurs after trailing 3-1 in the series. The  Sonics beat the Bullets 4-1 in the NBA Finals Follow Adam Zagoria on Twitter And Like ZAGS on Facebook