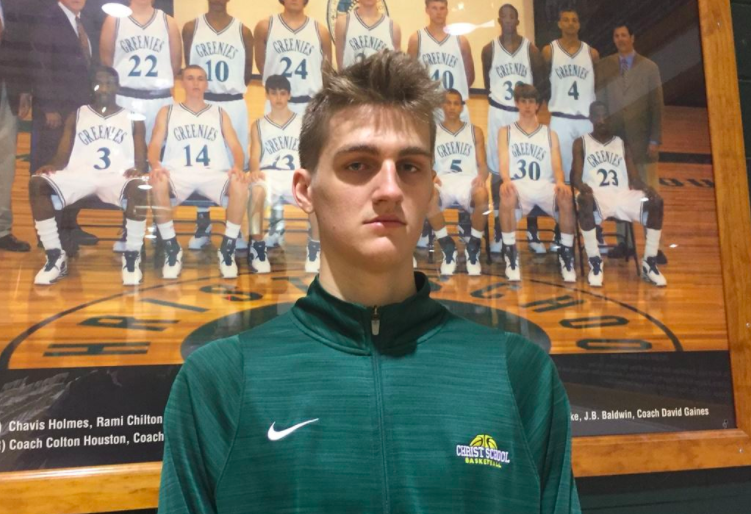 By SEAN BOCK Brandon Stone, the 6-foot-11 center from the Christ School (NC), cut his list of schools to four on Tuesday and will reclassify to the 2018 class.  South Carolina, Pittsburgh, Penn State and Duquesne are the final four candidates. “Their coaching staff is amazing,” Stone told ZAGSBLOG of South Carolina in December. “Frank Martin is one of the top coaches in the country and he knows how to get the best out of his players. They play and compete in arguably the best conference in college basketball.”

Stone took an unofficial visit to Columbia on Oct. 28 and the Gamecock coaching staff watched him post a double-double against Duke commit Zion Williamson and Spartanburg Day (SC) in November. South Carolina’s lone commit in the 2018 class is three-star shooting guard Jermaine Couisnard. As for Pittsburgh, Stone is from the area and is familiar with the program and took an unofficial visit to on Dec. 22 “They’re young right now, but I think they’ll turn it around in a couple years. Coach [Kevin] Stallings has a lot of success with guys of my skill set.” Three-star power forward Bryce Golden and two-star guard Danya Kingsby make up the Panther’s 2018 recruiting class. Stone took an unofficial visit to Penn State on Dec. 20 and also likes the proximity to home. “They have a good young team that has the chance to make tournament runs in the next couple years and coach [Pat] Chambers does a great job with them. They have a great staff all around and it’s relatively close to home.” The Nitanny Lions’ 2018 recruiting class consists of three-star guards Myles Dread and Rasir Bolton along with commits 6-foot-11 Tolu Jacobs Yaffa and point guard Daniil Kasatkin who have yet to sign. Stone has yet to take a visit to Duquesne but will get there soon as he plans to take an official visit to each school before committing. Through 27 games this season, Stone is averaging 15.4 points, 11.9 rebounds, and 1.9 blocks as a junior. According to Rivals, Stone is a three-star prospect.