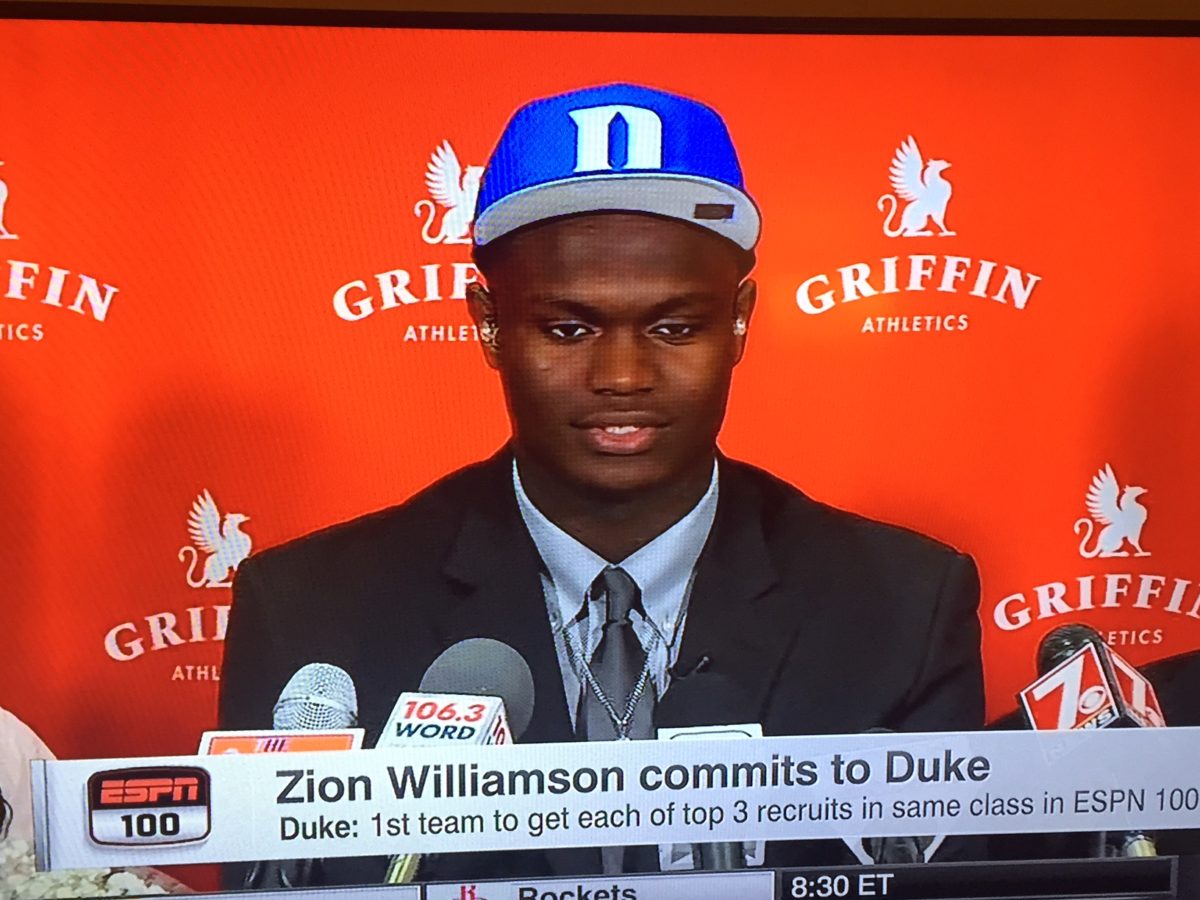 By ADAM ZAGORIA The Zion Williamson Sweepstakes is over — and Duke is the surprise winner. The 6-foot-6, 270-pound power forward chose the Blue Devils over Clemson, South Carolina, Kentucky,  Kansas and North Carolina during his ESPN2 announcement Saturday night.

Williamson’s commitment gives Duke the players ranked Nos. 1, 2, 3 and 10 in the Class of 2018 per ESPN in R.J Barrett, Williamson, Cam Reddish and Tre Jones. The 6-foot-7 Barrett and Williamson are also currently projected as the top two picks in the 2019 NBA Draft per ESPN. Duke has had five top-3 NBA Draft picks since 2011 and now it appears likely they’ll add to that list in both 2018 with Marvin Bagley III and in 2019 with this next group. “The brotherhood represents a family and Coach K, he’s just the most legendary coach to ever coach college basketball and I feel like going to Duke University I can learn a lot from him in my time there,” Williamson said. “And like I said, the brotherhood, it just represents a family and I’m all about family.” He added: “Like I said, Coach K, he came to all of us and he said we all can come together, all three of us bring our talents and our own uniqueness to the table. I feel that all three of us together, also with the point guard of Tre Jones, I feel we can do something special at Duke University.”

A social media sensation because of his sensational dunks and tremendous athleticsm for a guy his size, Williamson has 1.1 million Instagram followers and nearly 100,000 Twitter followers. Drake follows him on Twitter. On the court, he has drawn comparisons to Charles Barkley and Draymond Green.

“Zion is an extremely confident player with a Charles Barkley-like skill set,” said USA Basketball youth coach Don Showalter. “He moves well around the basket and can finish in a variety of ways both left- and right-handed. He’s a furious rebounder and has a great mindset to dominate.” This past week he was named to the Hoophall All-Tournament Team and then the McDonald’s All-American Game.

Despite barely playing in a month Zion Williamson is not disappointing tonight on ESPN. pic.twitter.com/UCVsYrUQ5J

Head coaches from Duke, North Carolina, South Carolina and Clemson met with Williamson this week, 247Sports.com reported. “First, I’d like to thank South Carolina and Clemson for even taking the time to recruit me,” he said. “But my mom said it best, I have to follow my heart and go to where my happiness is. And I just felt like it was Duke. I still have a lot of love for my state. I don’t want people to mistake that. I love my state to death and I’ll always represent it.” Williamson is the projected No. 2 pick in the 2019 NBA Draft per ESPN.com behind Duke-bound wing Barrett, who will play with Williamson in the McDonald’s Game and then at Duke. “I mean, we’ll have No. 1, No. 2, No. 3 and No. [10] so that says it all right there,” Barrett told ZAGSBLOG.   Follow Adam Zagoria on Twitter And Like ZAGS on Facebook