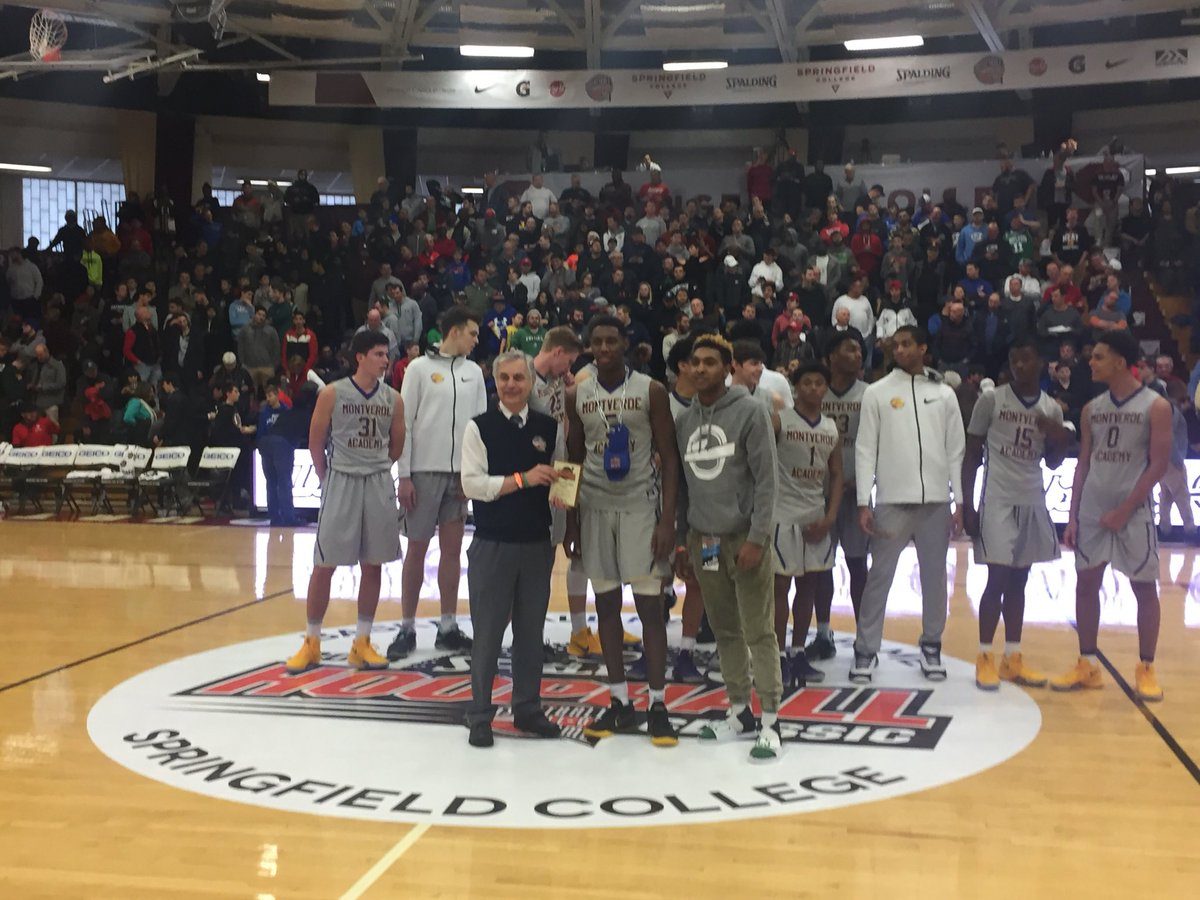 By TOM KONCHALSKI & ADAM ZAGORIA SPRINGFIELD, Mass.. — Here is the 22-man 2018 Hoophall All-Tournament Team. These aren’t the 22 best players who played in Springfield this past weekend. These are the 22 who performed at the highest level. The group includes four players from New Jersey as well as three Oregon commits who performed in front of coach Dana Altman, and two apiece from Duke and Maryland. For reference, check out the 2016 All-Tournament team here. And the 2017 team here. For more on Recruiting from the Hoophall, click here.   RJ Barrett, 6-7 Sr, Montverde Academy (DUKE) The Duke-bound wing went for 23 points on Saturday when Montverde edged out Simeon Academy (IL), 62-60. He followed it up with 22 points in a 74-48 victory over Mater Dei (CA) on Monday. Barrett and Montverde (23-0), which has won tournaments in China, Hawaii and South Carolina already this season, remained unbeaten on the season. Talen Horton-Tucker, 6-5 Sr., Simeon Academy (IOWA STATE) The Iowa State-bound guard went for 26 points vs. Montverde Academy on Saturday in the 62-60 loss. It was Montverde’s toughest game this season. Zion Williamson, 6-6 Sr., Spartanburg Country Day (UNCOMMITTED) Ahead of his college announcement next Saturday, Williamson put up 36 points and 7 rebounds in a nationally-televised 70-64 loss to Chino Hills on Saturday. He will announce on Saturday between Clemson, Kentucky, Duke, North Carolina, South Carolina and Kansas. Onyeka Okongwu, 6-9 Jr., Chino Hills (UNCOMMITTED) The uncommitted junior power forward went off for 35 points, 15 rebounds and 3 blocks in the 70-64 win over Williamson and Spartanburg Country Day. Eric Ayala, 6-4 Sr., IMG Academy Prep (MARYLAND) The Maryland-bound guard notched 26 points and 12 rebounds vs. Vermont Academy in an 81-78 win on Sunday. That came one day after he posted 24 points in a loss to Our Saviour Lutheran at the Big Apple Basketball Invitational in New York. Tyler Bertram, 6-2 Jr., Vermont Academy (UNCOMMITTED) Bertram went for 31 points and was 8-for-20 from three in an 81-78 loss to the IMG Academy postgrad team on Sunday. Hunter Dickinson, 7-0 So., DeMatha Catholic (UNCOMMITTED) The 7-footer had 21 points and 9 rebounds in an 86-56 destruction of Archbishop Molloy on Sunday. Bol Bol, 7-2 Sr., Findlay Prep (OREGON) With Dana Altman on hand all weekend, Bol tallied 31 points on 14-of-18 shooting from the field with 6 dunks as Findlay blitzed Immaculate Conception (N.J.) 91-47 on Sunday. Cole Swider, 6-8 Sr., St. Andrew’s (VILLANOVA) The Villanova-bound forward poured in 41 points on 14-for-25 shooting and 6-for-11 from three with 8 rebounds vs. Woodstock Academy in a 97-73 loss. Cart’eare Gordon, 6-8 Sr., Webster Groves (SAINT LOUIS) Gordon went off for 31 points on 13-for-16 shooting with 9 rebounds and 8 blocks in a 90-75 win over Mount Vernon (N.Y.) on Monday. Louis King, 6-8 Sr.,  Hudson Catholic (OREGON) King earned Most Outstanding Player honors after notching 32 points on 12-for-16 shooting with 9 rebounds, 5 assists and 7 turnovers in a 71-58 win over John Carroll (MD) on Monday. Will Richardson, 6-5 Sr., Oak Hill Academy (OREGON) Yet another strong performance from an Oregon signee as he went for 18 points on 7-for-10 shooting, including 2-for-3 from three, with 7 rebounds, 6 assists and 7 turnovers in an 83-69 win over University School on Monday. Vernon Carey, 6-10 Jr., University School (UNCOMMITTED) The junior big man notched 29 points, 10 rebounds and 3 blocks in an 83-69 loss to Oak Hill Academy (VA) on Monday. Cameron Reddish, 6-8 Sr, Westtown School (DUKE) The Duke-bound star poured in 25 points on 9-for-20 shooting, including 3-for 11 from three, with 3 rebounds in a 75-71 loss to IMG Academy (FL) on Monday. Terrance Williams, 6-6 So., Gonzaga Prep (UNCOMMITTED) The sophomore wing tallied 26 points and 14 rebounds in an 86-65 win over Sacred Heart (CT) on Saturday. Luther Muhammad., 6-3 Sr., Hudson Catholic (OHIO STATE) The Ohio State signee had 17 points with a great defensive effort on Kentucky-bound point guard Immanuel Quickley in a 71-58 win on Monday. He held Quickley to 5 points in the first half, and 19 overall. Naz Reid, 6-10 Sr., Roselle Catholic (LSU) The LSU signee went for 20 points and 12 rebounds vs. Oak Ridge (FL) in an 80-69 loss on Saturday. Emmitt Williams, 6-6 Sr., Oak Ridge (UNCOMMITTED) The uncommitted wing had 17 points and 12 rebounds in the 80-69 win over Roselle Catholic (N.J.) on Saturday. Tavin Lovan , 6-4 Sr., Hargrave Military (UNCOMMITTED) The uncommitted guard notched 32 points in an 90-74 loss to Northfield Mount Hermon (MA) on Sunday. Scottie Lewis, 6-4 Jr., Ranney School  (UNCOMMITTED) The highly sought after junior poured in 27 points in a 71-48 loss to Mount Saint Joe’s (MD) on Sunday. Jalen Smith, 6-10, Mount Saint Joe’s, (MARYLAND) The Maryland signee notched 22 points and 9 rebounds vs. Ranney in a 71-48 victory on Sunday. Noah Farrakhan, 6-1 So., IMG Academy (UNCOMMITTED) The uncommitted sophomore tallied 22 points on 9-for-11 shooting, including 4-for-6 from three, vs. Westtown (PA) in a 75-71 win.

Who made the 2018 McDonald's All-American Game?