Who made the 2018 McDonald's All-American Game? | Zagsblog
Follow @adamzagoria

Who made the 2018 McDonald’s All-American Game? 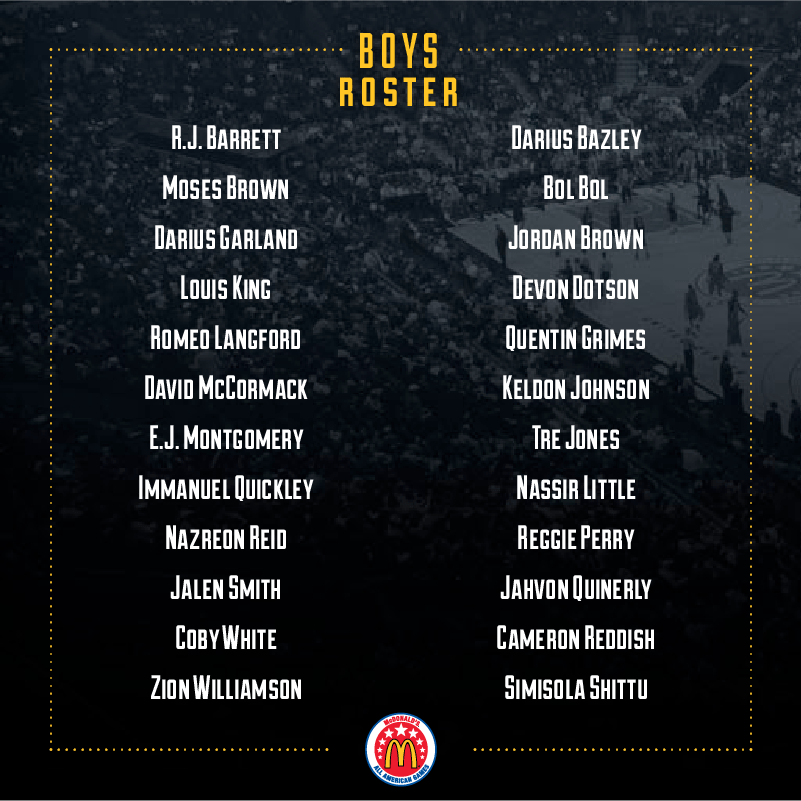 By JACOB POLACHECK The McDonald’s All-American Game selections are out for the March 28 at Atlanta’s Philips Arena. Kansas and Duke each have three signees selected for the game. For Duke, commits R.J. Barrett, Cameron Reddish, and Tre Jones were selected, bringing Coach Mike Krzyzewski’s total of McDonald’s All-Americans to 67, the most all-time by a coach. Kansas has three commits in Quentin Grimes, Devon Dotson, and David McCormack, who were selected for the game. Kansas is also in the running for Romeo Langford, who has a final three of Kansas, Indiana, and Vanderbilt. Kentucky has two commits selected to the game with Immanuel Quickley and Keldon Johnson. Kentucky has signed 64 McDonald’s All Americans since the team began in 1977, including current Wildcats Sacha Killeya-Jones (2016), Quade Green, (2017), Kevin Knox (2017), Nick Richards (2017), Jarred Vanderbilt (2017) and PJ Washington (2017). Kansas, Kentucky, and Duke are all in the running for Zion Williamson, who was selected to the game. Williamson is set to make his college decision on Saturday. This year’s game will feature two Canadians in Duke commit R.J. Barrett, and Vanderbilt commit Simi Shittu. For the first time ever, there will also be three players from the state of New Jersey in LSU commit Naz Reid, Oregon commit Louis King and uncommitted point guard Jahvon Quinerly. King and Quinerly both play for Hudson Catholic. Uncommitted center Moses Brown is the only player selected to come from New York.

“It’s a dream come true,” said LSU commit Naz Reid. He is first Roselle Catholic player in the game since Isaiah Briscoe in 2015 and the only LSU commit selected for this year’s game.

“I’m so happy for Naz to have received this honor,” said Roselle Catholic head coach Dave Boff.  “It was a goal of his to be a McDonald’s All American and he worked hard to get it. The entire Roselle Catholic family is thrilled to see him reach this goal.”

“To have three kids in the game from NJ is great for our state. The programs here take great pride in being a state that produces great players so I think this is something we can all be proud of.”

Reid, Quinerly, and King all played together on the Under Armour Circuit with Sports U.

Last September, the USA Today reported that the McDonald’s All-American Game will move from Chicago to Atlanta. Chicago has hosted the Games the past seven years. Atlanta previously hosted the Games in 1983 and 1992. The game will take place March 28 at Atlanta’s Philips Arena. EAST TEAM WEST TEAM   Follow Jacob on Twitter Follow Adam Zagoria on Twitter And Like ZAGS on Facebook