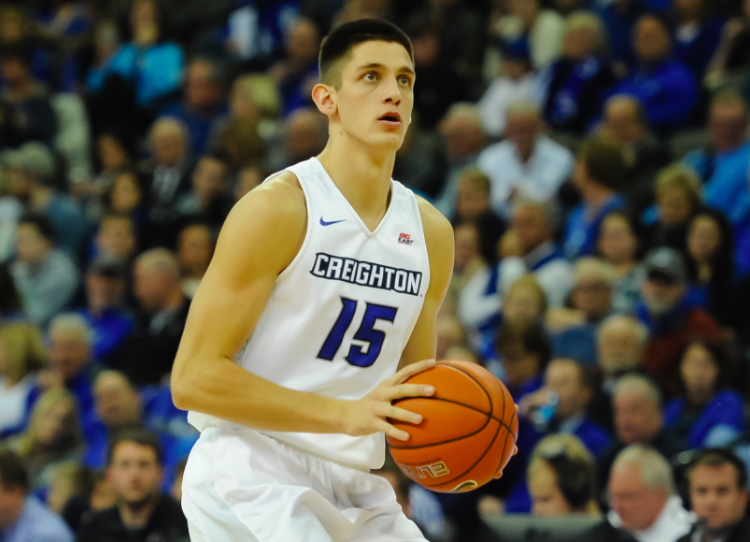 OMAHA, Neb. — The Creighton Bluejays burst onto the college basketball scene a few years ago with teams led by National Player of the Year Doug McDermott, now with the Knicks. After McDermott left for the NBA, the program lost its identity somewhat when it missed the NCAA Tournament in 2015 and ’16. Searching for an answer, head coach Greg McDermott found a diamond in the rough, literally. In 2014, McDermott and the coaching staff gained the services of 7-foot Justin Patton from nearby Omaha North (NE) High School. Though Patton was a four-star prospect, he only received one scholarship offer, that being his hometown Bluejays. McDermott decided to redshirt Patton for the 2015-16 season, which is something unusual with top-100 incoming freshmen. It seemed to be a blessing in disguise. In his redshirt freshmen year, Patton had NBA teams drooling as he averaged 12.9 points and 6.2 rebounds and was a big reason for his team making the Big Dance for the first time since Doug McDermott was wearing the white and blue. What made Patton such a good prospect was his huge ceiling. For someone of his height and stature, Patton ran the floor exceptionally well, had the skills of a guard on the perimeter and could bully other big men inside. Following his breakout campaign, Patton decided to take his talents to the NBA Draft and was ultimately selected 16th overall by the Minnesota Timberwolves. With the loss of Patton, coach McDermott and company needed a boost in the frontcourt for the upcoming season. Averaging 5.9 minutes a game last year, many Creighton fans were worried about sophomore forward Martin Krampelj seeing a vast increase in floor time. Through the first 15 games of the season, Krampelj has been everything Bluejay fans could have asked for, and then some. After putting up a little under 3 points per game last season, Krampelji has improved that statistic to 12.6 points a contest and is grabbing 7.8 rebounds to make his impact that much more significant on the floor. By no means is Krampelj an NBA prospect, but he does all the little things necessary to win ball games. “I might not have played as much last year, but I was playing against Big East dudes like Justin Patton in practice,” Krampelj said following the Bluejays 90-84 loss against Seton Hall on Dec. 28. “Now the lights are on.” When the lights were on Wednesday night in the 78-71 victory over St. John’s, Krampelj delivered as he had 14 points, 11 rebounds, his fourth career double-double, and 2 blocks including one on a fastbreak with 45 seconds left that would’ve tied the game if it weren’t for the 6-foot-9 Slovenian. “He was really good,” McDermott said. “For him to flip the switch and crank it up is a sign of how much he’s matured as a player from not only last year but even from the start of the season.” While Krampelj has been a pleasant surprise at this point in the season, there’s another redshirt player sitting out this year who’s chomping at the bit to get out there. Jacob Epperson, the 6-foot-11 Australian center from La Lumiere (IN), was the highest ranked recruit in Creighton’s 2017 recruiting class, which includes guards Mitch Ballock and Ty-shon Alexander. Teammates with Michigan State’s Jaren Jackson, Michigan’s Jordan Poole, and Brian Bowen on La Lumiere’s Dick’s National Championship team, Epperson is another special player who knows how to win ball games and will benefit greatly from sitting out a year much like Patton did. Nearly 7-foot, Epperson is more similar to Patton than Krampelj as he can get out in transition, hit the three ball and makes a living inside the paint which makes him such a tough matchup for opponents. ESPN’s Fran Fraschilla said in October while watching a Creighton practice that, “Epperson is 25 pounds and 12 months away from being a national name.” On top of Krampelj’s consistent play day in and day out, Epperson’s potential and the idea that he’s drawing similarities to Patton should be giving Big East head coaches nightmares of what’s to come of this future Creighton frontcourt. While guards have been the focal point of successful college basketball teams in the past decade, big men are a necessity on a team that expects to be cutting down the nets in March. Let’s take a look at the last three national champions and see who they had manning the middle. 2017: North Carolina (Kennedy Meeks and Isaiah Hicks) 2016: Villanova (Daniel Ochefu and Darryl Reynolds) 2015: Duke (Jahlil Okafor and Amile Jefferson) While each of these teams also had great guards, they also had players who could handle their own in the paint and made a difference down the stretch and in their national title runs. No one is guaranteeing a Creighton national championship in the next couple years, but with the way McDermott and the rest of the coaching staff have developed their frontcourt players, there’s plenty to be excited about in Omaha, especially with the big men. Photo: Creighton Athletics
Follow Sean on Twitter
Follow Adam Zagoria on Twitter
And Like ZAGS on Facebook