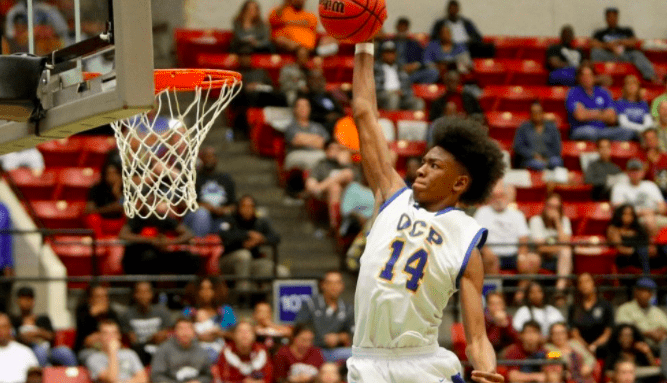 By SEAN BOCK CJ Walker, the 6-foot-7 small forward from Orlando Christian Prep (FL), has offers from a slew of high major programs and has been receiving high interest from a handful of bluebloods, he told ZAGSBLOG on Monday. Walker holds offers from Florida, Miami (FL), Florida State, UCF, Georgia Tech, Virginia Tech, Alabama, Auburn, Wichita State, Pittsburgh, Rutgers, VCU, USF, Mississippi State, and Georgetown, among others. Walker also said he’s been receiving interest from Texas A&M, North Carolina, and UCLA. A high school teammate of 2018 UNC commit Nassir Little, Walker said Little has been in his ear about joining him in Chapel Hill. “Yes, he tells me how much of a great staff they have and the atmosphere at UNC,” Walker said. Walker and his OCP team finished 1-2 at the City of Palms Classic in December. UCLA assistant coach Tyus Edney watched Walker play twice at the tournament. “UCLA is UCLA,” Walker said. “They play my style of play, and they produce pros.” On Dec. 28, Walker took an unofficial visit to St. John’s to familiarize himself with the program. “They’re coached by an NBA vet [Chris Mullin],” Walker said. “He’s player-coach, and it’s New York, it’s home.” As for future unofficial visits, Walker said he doesn’t have any planned now but is trying some in his schedule. Still a junior, Walker doesn’t seem to be in a rush with his decision. “Right now my recruiting is wide open,” he said. “I hear from everyone the same, and I haven’t really focused on who is hitting me up the most. I’m still feeling the schools out.” “Good relationship with me, my family, and my guy,” Walker said of what he’s looking for in a school. “Up-tempo offense and defense, letting me play through my mistakes and plays freshman.” In six games with Game Elite 2019 on the Adidas Gauntlet, Walker averaged 8.0 points, 7.5 rebounds, and 1.0 assist in 12.5 minutes per contest. He will run with E1T1 this upcoming summer. According to 247Sports, Walker is the No. 73 player in the 2019 class and the No. 7 prospect from the state of Florida. Photo: Orlando Sentinel
Follow Sean on Twitter
Follow Adam Zagoria on Twitter
And Like ZAGS on Facebook