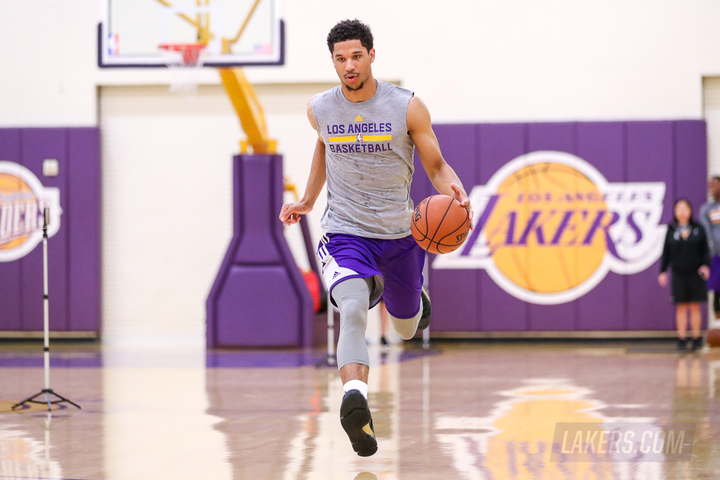 NEW YORK — Villanova is the No. 1 team in the nation and has the highest winning percentage in college basketball the last four years, but Josh Hart thinks his alma mater still doesn’t get the respect it deserves. “Oh, we don’t at all and we should, and that’s just how it is,” Hart, a rookie with the Los Angeles Lakers, told me before the Knicks win over Lonzo Ball and the Lakers on Dec. 13. “The last four years, four [Big East] Conference championships, two [Big East] Tournament championships, an NCAA Championship, won the most college games out of anybody in the last four years and we definitely don’t get the respect that we deserve.” Like Gonzaga coach Mark Few, Hart feels Villanova has done as much — or more — than Kentucky and Duke over that period, but doesn’t get the same amount of respect. That stems in part from the fact that while those schools churn out one-and-done players, Villanova hasn’t had a single one-and-done during coach Jay Wright’s tenure. “Those guys get the five-star recruits and they get a lot of love with that but we’ve proven the last four years that we’ve been the best program in the country,” Hart said. Despite losing Hart, Kris Jenkins and Ryan Arcidiacono from the team that won the 2016 NCAA championship, Villanova continues to thrive with a group now led by Jalen Brunson, Mikal Bridges, Donte DiVincenzo and Phil Booth. The Wildcats are currently 11-0 and would be the No. 1 overall seed if the NCAA Tournament began today, per ESPN’s Joe Lunardi. Wright said he texted Hart, Jenkins and Arcidiacono before Villanova’s first game to say he was nervous. “I’ve texted those guys before our first scrimmage, before our first game, I’ve said to them, ‘I’m nervous going into this without you,'” Wright told ESPN’s Seth Greenberg. “‘I’ve had you by my side every game.’ But there’s a great relationship between the alums and the current players. “When I texted those guys and said ‘I’m nervous,’ they all texted back and said, ‘Don’t worry coach, they got this.’ Wright said Brunson and Bridges talk to Hart and the other former players “every day.” “I know there’s that connection, that gives me a little bit of security, too,” Wright said. The 6-7 Bridges is currently projected as the No. 12 pick in the NBA Draft, per ESPN, while Brunson figures to have a long NBA career whenever he decides to go. “Mikal Bridges has been playing great,” Hart said, adding he “definitely” looks like an NBA player. “His athleticism, how good he is defensively. He’s been shooting the ball very well this year so that definitely helps him. And just his body type. He’s 6-7, 6-8, lanky. I think his wingspan is like 7-1, 7-3, and the way he’s been playing has been great.” As for his own road to the NBA, Hart was the No. 30 pick last year after spending four seasons on campus. He’s now averaging 4.0 points and 2.6 rebounds for the rebuilding Lakers, who are expected to be in the mix for LeBron James during free agency next summer. “The maturity that I have definitely feels good, just playing against guys at the college level for four years,” he said. “Developing my body, they did a great job nutrition-wise. Coach Shaq, just weight-lifting wise. Just physically I’m stronger and more ready to guard guys. Guarding guys in the post and just be able to compete against bigger and stronger guys. “And with the little things, attention-to-detail things, I think being at ‘Nova definitely helped me with that.” Hart has no doubt that Villanova can win another NCAA championship — its second in three years. “Without a doubt,” he said. “They just gotta excecute and have the attention to detail but talent-wise they have the ability to.” It’s a long way from March, but if Villanova cuts down the nets again in San Antonio, it would put the Wildcats ahead of Kentucky and Duke and Kansas in that category in terms of titles won over that span. “If we get there, especially if they win another one, winning two national championships in three years, it would be foolish for you not to put them in that category,” Hart said. “I think it’s foolish for you not to put them in that category right now, but if you don’t put them in that category, I kind of question your intelligence.” Follow Adam Zagoria on Twitter And Like ZAGS on Facebook