7-Foot-2 Chol Marial is Thon Maker’s Cousin, Could Follow Him to NBA 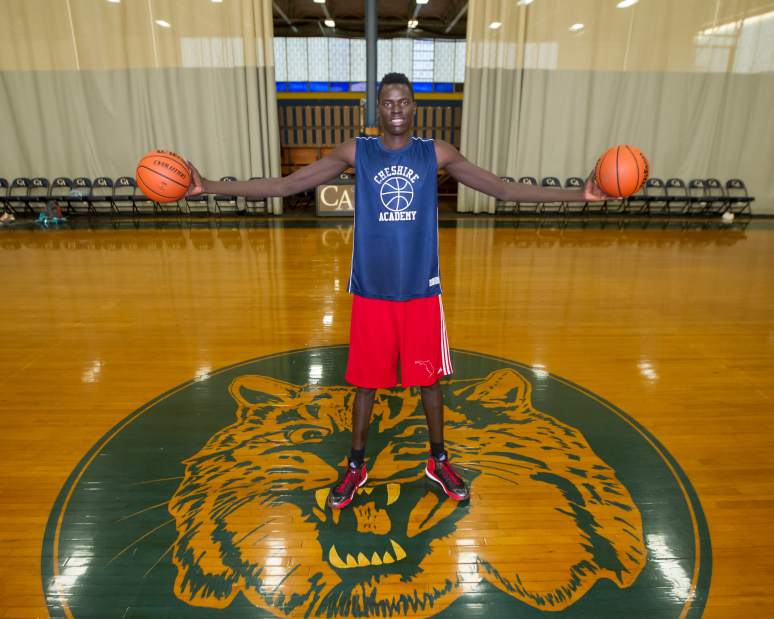 Chol Marial is a 7-foot-2 native of Sudan who has only been playing basketball since 2013, but he could be on his way to career in the NBA. The cousin of current Milwaukee Bucks forward Thon Maker, Marial is currently playing at Cheshire (CT) Academy for head coach Kevin Kehoe. “He’s probably, if this is possible, a better kid than a basketball player,” Kehoe told MyRecordJournal.com. “He’s one of the nicest, kindest young men that I’ve coached. “As far as a basketball player, if Chol does what he’s supposed to do for the next five years, he’s probably a lottery pick in the NBA Draft. He’s long, he’s very gifted, he’s very agile. He has all the tools that you need to have to be a great player. But what’s probably more important than that, is Chol really loves the sport of basketball.” In a phone interview, Kehoe added: “He’s 7-foot-2 with a 7-foot-11 wingspan. Runs like a deer, loves basketball, loves getting better and absolutely a freakish athlete.” Kehoe has compared Marial, 17, to Ralph Sampson. “When I first watched a video of Chol, I was trying to draw comparisons,” Kehoe told MyRecordJournal.com. “I was thinking about what kid I could compare him to, as far as college prospects. There have been a lot of 7-foot kids. The only one I could draw on was Ralph Sampson because of the way the kid ran the floor and moved.” Ranked as the No. 2 center in the Class of 2019 by 247Sports.com, Marial holds offers from  St. John’s, Delaware, Georgetown, Florida State, SMU and Iowa, per Kehoe. “Those are the schools that I know of,” Kehoe said by phone. UConn and West Virginia have also offered Marial, and UConn coach Kevin Ollie has been into see him. “With him being an underclassmen, he can’t be contacted by college coaches and he has not taken any visits yet,” Kehoe said. By all accounts, Marial is a great kid with a positive attitude.

“[The players] are like my brothers,” he told MyRecordJournal.com. “This school is like my family, like my dad and mom. Everybody knows me, but I don’t know a lot of people. When they say, ‘Hi,’ I just say, ‘Hi’ because I don’t want to be mean. You want to treat them the way you want them to treat you.

“My mom told me that when your family is mean to other people, you’re going to grow up like that, but my family is nice to people.”

Marial will be on display on the Under Armor circuit this spring and summer with the Connecticut Basketball Club. He will be at the New York Under Armor stop April 21-23 along with fellow bigs Naz Reid and Moses Brown.