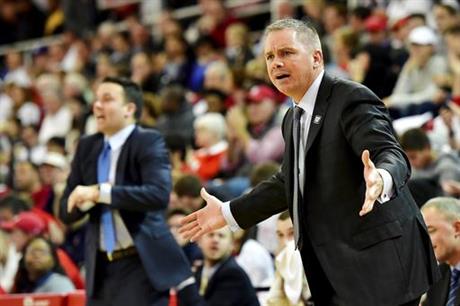 PITTSBURGH (AP) — Butler athletic director Barry Collier has dealt with plenty of turbulence during his basketball career. It was nothing like Thursday night’s flight home from New York. Collier said the lights on the plane went out about 40 minutes into the flight, oxygen masks deployed, tears flowed and text messages started being sent as the Bulldogs descended from 35,000 feet to 10,000 feet before an unscheduled landing in Pittsburgh. In Collier’s opinion, it was eventful and unusual but not terrifying. “It felt a lot like a normal descent for a landing, it wasn’t dramatically different — other than the cabin was dark,” Collier told The Associated Press on Friday as the Bulldogs took a bus home. “After about five or 10 minutes, the lights came back on.” The charter plane was flying from LaGuardia Airport to Indianapolis after Thursday’s 76-73 loss to St. John’s. Collier said the Bulldogs still haven’t gotten an explanation about what happened. Earlier in the day, coach Chris Holtmann told ESPN the plane became “really cold” and after the oxygen masks dropped down, a flight attendant told the team and staff members to put them on. Holtmann said during the descent, panicked players were yelling in the back of the plane and staff members were texting their wives, worried they might not see them again. “I was shook. It was scary, we had guys crying,” he told ESPN. “As a coach, you are obviously thinking of your family, but you are also thinking about all the young men on the plane.” Collier confirmed the reactions, though he said he was uncertain of what was in the text messages or who they were going to. The plane landed in Pittsburgh after midnight and the team spent the night at a hotel. Butler associate athletic director John Dedman said another plane was not immediately available and everyone wanted to return to Indianapolis “in a more timely fashion,” so the bus ride was the next step. Dedman said the school appreciates “the notes and well wishes” it has received. Butler (11-2, 0-1 Big East) returns to action Sunday when it hosts Providence. “I think having a little time before that game helps everybody concerned,” Collier said.