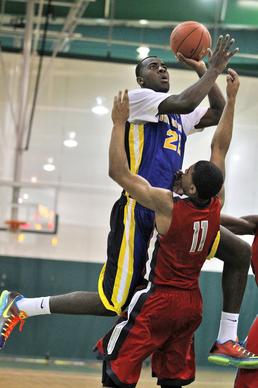 D.J. Foreman is the latest building block in the Rutgers basketball program. The 6-foot-9, 240-pound combo forward from Spring Valley, N.Y., committed to coach Eddie Jordan Thursday on a visit. “Yes, I just committed,” he told SNY.tv by phone. “They made me feel like it was a family on the visit. I love the coaching staff and it’s real close.” Foreman said he also considered Minnesota, USC, Providence and Pittsburgh, but he also held offers from Iowa, Iowa State, Oklahoma, Auburn and Alabama, among others. Foreman previously attended Don Bosco Prep, St. Raymond’s in The Bronx and Spring Valley High before going to Massanutten (Va.) Military Academy before the 2011-12 school year. He considered going to college in 2013, but will remain Class of 2014. AT the Nike EYBL stop in April, Foreman helped Boo Williams go 5-0. He tallied 30 points on 13-for-18 shooting and added seven rebounds in two games. “[Rutgers] is recruiting him at the three, so he’s a mismatch,” Mike Moore, Foreman’s mentor, told SNY.tv. “We’ve seen Eddie Jordan coach. It’s no secret what he brings to the table. They’re going to the Big Ten, he’s close to home. All those things were just something he didn’t want to pass up.”