While the reported trade for Andrea Bargnani may help the Knicks in the short term, it could well end up contributing to their erosion in the long run.

According to reports, the Knicks will send Marcus Camby, Steve Novak and two draft picks — including their first-round pick in 2016 — North of the border in exchange for the 7-foot Bargnani, the No. 1 pick in the 2006 NBA Draft.

As of early Sunday evening, the trade hadn’t been finalized, with Novak’s agent, Mark Bartelstein, telling SNY.tv, “There’s nothing happening at the moment.” ESPNNewYork.com reported it could become official July 10.

Camby and Novak are certainly expendable parts, but the loss of the draft picks means the Knicks continue to plunder their future for a questionable present.

Myles Turner is getting ready to trim his list.

When you’re arguably the hottest prospect in America, you’ve got to start somewhere.

He is no longer considering George Washington, but Dayton is still an option.

“Brian heard from roughly 15 schools, most of whom were looking to add a ‘shooter,'” New Heights coach Chris Alesi told SNY.tv. 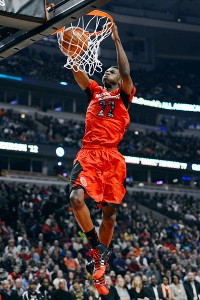 Teams like the Philadelphia 76ers and Boston Celtics have traded away star players and are rebuilding with youth.

Because the best way to facilitate a shot at the lottery isn’t to actually throw games, but to tank the roster.

Other franchises like the Charlotte Bobcats, Orlando Magic, New Orleans Pelicans and Phoenix Suns will likely continue to struggle — putting them in the mix for the stacked 2014 Draft that could include Andrew Wiggins, Julius Randle, Aaron Gordon, Jabari Parker, Marcus Smart and Andrew and Aaron Harrison.

“It’s a big prize,” one veteran NBA scout said of next year’s draft. “The soft tank is in, going young and losing. Four or five teams might look at it, two or three will do it.”

Hancock drained “seven or eight” 3-pointers, according to ESPN’s Fran Fraschilla, who was in attendance.

“It looked like the game against Michigan,” USA head coach Bob McKillop told SNY.tv, referring to the national championship game in which Hancock went 5-for-5 from deep for a team-best 22 points off the bench in Louisville’s 82-76 victory.

Huntington (W.V.) Prep point guard Josh Perkins will make his college announcement Aug. 25, but not before he takes visits to Kentucky and UConn, his father told SNY.tv Saturday night.

“He’s comfortable enough with all the information he has and the visits coming up so he can put all his focus on the prep school,” Randy Perkins said in regards to his son’s move to Huntington from Aurora (Co.) Regis Jesuit.

The elder Perkins said his son — the Rivals No. 28 player in the Class of 2014 — is considering Kentucky, UConn, Gonzaga, UCLA, USC and Minnesota and that all but Kentucky have offered.

The Knicks will decline the team option