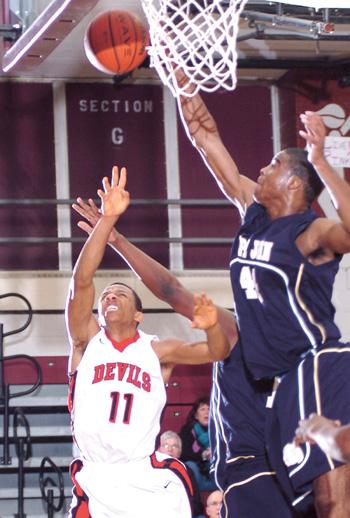 After missing half the season with a hand injury, Jermaine Lawrence will make his season debut Thursday night when Pope John XXIII host Morris Hills.

The addition could have major implications for the New Jersey North Non-Public A bracket come state playoff time.

That happened one day after he worked out for Cincinnati coach Mick Cronin at the school.

He is considering Cincinnati, St. John’s and UNLV, and will now visit St. John’s in mid-February, the New York Post reported. St. John’s only home games next month are Feb. 8 (UConn), Feb. 20 (USF) and Feb. 24 (Pitt).

“It’s going to be great to see him out on the court for a lot of reasons but first and foremost for his own psyche,” Pope John coach Jason Hasson told SNY.tv.

Ohio State is the latest big-time program to offer a scholarship to Malachi Richardson, the 6-foot-6 wing out of Roselle (N.J.) Catholic.

“We are very happy for Malachi and proud that he has recieved another high-major offer from a fantastic univerity and program,” RC coach Dave Boff told SNY.tv “Ohio State is one of the premier programs in the country.”

Buckeyes coach Thad Matta watched Richardson this past weekend when RC played against Walnut Hills (OH) in the Flyin’ to the Hoop event in Dayton, Ohio. 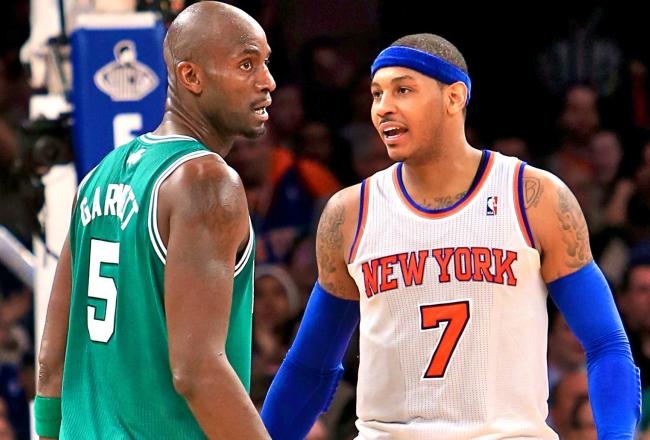 But when Carmelo Anthony and the Knicks make an appearance at TD Garden Thursday night, they figure to be especially unfriendly.

Melo will be making his first appearance in Beantown since he confronted Kevin Garnett outside the Celtics locker room and again on the Madison Square Garden loading dock following the now infamous Honey Nut Cheerios events of Jan. 7. At the time, Anthony said Garnett said something that “crossed the line” during Boston’s 102-96 win at Madison Square Garden.

Anthony was ultimately suspended one game for his actions.

“That’s the least of my concerns at this point,” Anthony said of the Boston crowd Wednesday following practice. “The Boston arena’s alway hostile so I’m not expecting nothing different tomorrow.”

Wesley Myers is a 6-foot-2 senior guard at Brooklyn Boys & Girls, the three-time New York PSAL champions and reigning New York State Federation champs. He and his teammates will face St. Anthony in the SNY Invitational on Friday at City College. Long Island Lutheran meets Cardinal Hayes in the other game Friday. The consolation game and championship will be played Saturday. Here’s his Player Blog.

What’s Up Basketball Family? It’s Wesley Myers here with the 411 on my senior season at the home of the NY State Champions.

It’s been a rather difficult first half of the season because we have a lot of newcomers who are inexperienced with winning and some of the returning players are now thrust into significant playing roles.

The 6-foot-10 Lawrence of Pope John XXIII is considering Cincinnati, St. John’s and UNLV and is expected to announce soon.

He will visit St. John’s this coming weekend, according to Evan Daniels of Scout.com. After visiting Rutgers Wednesday, the Johnnies host Seton Hall Sunday.

Lawrence has yet to play this season as he recovers from hand surgery.

“[Coach Cronin] watched our game-day workout and talked to me and Jermaine for a little while about how he would fit in at Cincy,” Pope John coach Jason Hasson told SNY.tv.

GREENBURGH, N.Y. — With a tough week of games ahead for the Knicks, the injury news keeps getting better.

Raymond Felton, out since late December with a fractured right pinky suffered against the Lakers on Christmas Day, was cleared Tuesday for non-contact practice.

Felton took part in conditioning drills and was taking jumpers, working with shooting coach Dave Hopla while the Knicks scrimmaged.

The 6-foot-10 Lawrence has yet to play in a game this season while recovering from hand surgery, but is expected to announce soon for Cincinnati, St. John’s or UNLV.

Cincinnati coach Mick Cronin is expected to watch him work out today at Pope John.