GREENBURGH, N.Y. — The Knicks were back at practice on Thursday and the question at hand was how Jason Kidd felt after sitting out the win over the Magic on Wednesday with a sore back.

“Well [Kidd] will be back tomorrow [against Milwaukee], so we will put him back in the [starting] lineup.” said coach Mike Woodson after practice.

“We’ve been pretty good with him in the starting lineup…so he could have played if he wanted too, but it was our decision to let him rest.” 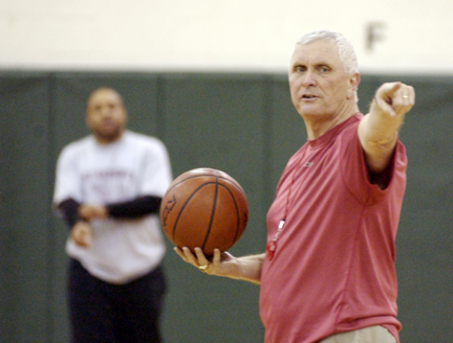 But for all intents and purposes, the state championship will take place Friday night sometime after 8 p.m. at the Prudential Center in Newark.

Hall of Fame coach Bob Hurley and St. Anthony (18-0) will carry an 83-game winning streak dating to March 2010 into a showdown with St. Benedict’s Prep (18-1), which had also been unbeaten before stumbling Wednesday night at Blair.

The two teams cannot meet in the state tournament because St. Benedict’s is not a full member of the state association and plays a national schedule as a result. While St. Anthony’s season has culminated the last two seasons — and 12 times overall — with a Tournament of Champions crown, St. Benedict’s is looking ahead to the ESPN National High School Championship in April.

Duke is the latest high-profile school to get involved with 2015 Roselle (N.J.) Catholic wing Malachi Richardson.

“They are very excited to start recruiting him and said that they recruit a select few kids that fit what they are looking for both on and off the court and they think he is that type of a person and player,” Boff, who also coaches Syracuse-bound forward Tyler Roberson, told SNY.tv.

Amar’e Thriving in Bench Role in Pursuit of a Championship

NEW YORK — A lot of NBA stars might have grumbled and groused about being sent to the bench after returning from a serious injury.

But not Amar’e Stoudemire.

Since his return after the New Year from offseason knee surgery, Stoudemire has quietly accepted his bench role and is evolving into one of the Knicks’ most potent offensive forces down the stretch.

“It’s in my DNA,” the six-time All-Star said after going for 14 points on 7-of-7 shooting, including several rim-rattling dunks, and four rebounds in the Knicks’ 113-97 win over the Magic at Madison Square Garden.

“I’m just willing to do whatever it takes to win. I’ve accomplished a lot in my career so far and the next thing to accomplish is to win a championship. And whatever that takes, whatever role that I need to step into, I’m totally open to it.

Melo Rooting for a Ravens Win on Super Sunday

NEW YORK -- No surprise on who

St. Benedict’s won’t be undefeated when they head into Friday’s monster showdown with St. Anthony at The Prudential Center.

“It’s certainly one of the biggest wins in our program’s history,” Blair coach Joe Mantegna told SNY.tv by phone.