UConn Latest to Reach Out to Harrell

UConn is the latest school to reach out to former Virginia Tech commit Montrezl Harrell, according to Kevin Duffy of the Connecticut News.

The Rivals No. 20 power forward in the Class of 2012, Harrell received his release from Virginia Tech Wednesday following the firing of Seth Greenberg.

After initially cutting his list to Kentucky and North Carolina, 2013 wing Troy Williams has now expanded his list to six and the list could change again.

“We’re looking at other options,” Boo Williams, Troy’s legendary uncle and AAU coach, told SNY.tv by phone. “We just want to make sure we get it right.”

As far as Louisville, Troy Williams said, ” Coach Rick Pitino is a really good coach. I get along with him well. They play uptempo and fast.”

More than 20 schools have expressed interest 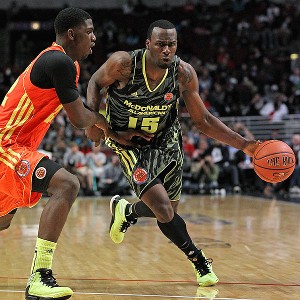 It remains to be seen if the Brooklyn Nets will be any good, but Brooklyn figures to be chock full of strong college basketball games next season.

Beginning in November, the new Barclays Center will host some of the most storied programs in college hoops, including Kentucky, UCLA, Indiana, Maryland, Georgetown, Michigan, St. John’s, Notre Dame and West Virginia. (See below for the schedule.).

Many of the top freshman in college basketball will be on display, too.

Indiana has landed a commitment from 2013 shooting guard Stanford Robinson of Paul VI of Fairfax, Va.

The 6-foot-4, 185-pound left-hander reportedly chose the Hoosiers over Maryland, Texas and Villanova.

“He felt very strong about the opportunity he had to play for coach (Tom) Crean,” Paul VI coach Glen Farello told the Herald Times.

“There was a lot of comfort level there with him and his staff and everything about Indiana basketball. There’s a lot to like obviously, and Stan just felt very