On a conference call to announce Mike Woodson as the team’s coach, Grunwald said he “can’t see a scenario where we don’t keep Lin,” a restricted free agent this summer.

“The rules are what they are and that’s what they say,” Grunwald added.

“We can keep him if we want and we do want to keep him. And I believe that Jeremy had a great experience here and I believe he wants to come back.”

Lin’s agent, Roger Montgomery, recently told the New York Post there was no guarantee that Lin would return even though the Knicks control his rights.

UNLV keeps piling up talented frontcourt bodies for the future.

“He brings invaluable experience after being a two-year starter at UConn and a starter on [their] national title team,” UNLV coach Dave Rice told Jon Rothstein of CBSSports.com.

Saying Mike Woodson “was our guy,” Knicks GM Glen Grunwald told the world the franchise never considered contacting Phil Jackson to lead them going forward and instead opted to give Woodson a multi-year extension.

Terms of the deal were not disclosed and Woodson called the matter “private.” Reports have it at three years.

“We thought he was the right guy for this team at this team,” Grunwald said on a conference call. “Obviously, there’s some great coaches out there that had we opened the search would have been called, namely Phil Jackson, who is the most successful coach in the NBA history but we felt Woody was our guy and he showed it during the season and in our discussions after the season.”

Marquette’s DJO: ‘I know what the Knicks need’ 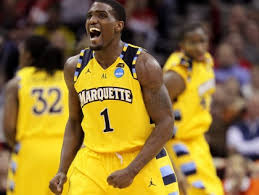 The former Marquette star worked out for the team on Thursday and said he was more concerned with bringing intensity on the defensive end than with showing his offensive skills to head coach Mike Woodson and company.

“I know what the Knicks need so I came with a defensive mindset,” DJO told SNY.tv. “With Iman [Shumpert] being out, with Baron [Davis] being out, with them being low on guards, I know if can just get in and play hard for six or seven minutes defensive-wise then that’s all I need to do.”

Holloway: Arizona Getting a Star in Lyons

“Mark Lyons is really good,” Holloway told SNY.tv following his workout with the Knicks Wednesday. “I feel like he was the second-best player in the A-10 behind myself.”

For the record, St. Bonaventure forward Andrew Nicholson was named the A-10 Player of the year, while Holloway made the first team and Lyons the third. Like Holloway, Nicholson is now draft eligible.

Some of the biggest names in the Class of 2013 are on the move.

“He’s a combo forward, he can play the three/four,” Oak Hill coach Steve Smith said of Williams in confirming the news. “His deficiency, if he has one, is his outside shot. He thinks he needs to make a few changes on his shot.

“He plays extremely hard, defends, offensive rebounds like crazy. Scores inside, scores mid-range. He just needs to work on his outside shot to become a little more consistent. I like the fact that he plays so hard.” 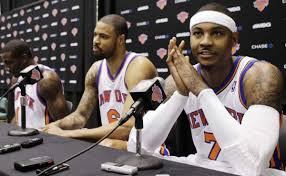 The Miami Heat’s LeBron James, the 2011-12 Kia NBA Most Valuable Player and winner of three of the previous four MVP awards, highlights the 2011-12 All-NBA First Team. James received 118 of a possible 120 first team votes. Joining James on the First Team are Kobe Bryant of the Los Angeles Lakers, Kevin Durant of the Oklahoma City Thunder, Dwight Howard of the Orlando Magic, and Chris Paul of the Los Angeles Clippers.

Despite averaging a career-low 37.5 minutes, the eight-time All-Star led the NBA in plus-minus score differential (+7.6) and ranked third in scoring (27.1 ppg), while pacing the Heat in assists (6.2 apg) and tying for the team lead in rebounds (7.9 rpg). In addition, James established career bests in field goal percentage (.531) and three-point field goal percentage (.362). James earns First Team honors for the fifth straight season and sixth time overall.